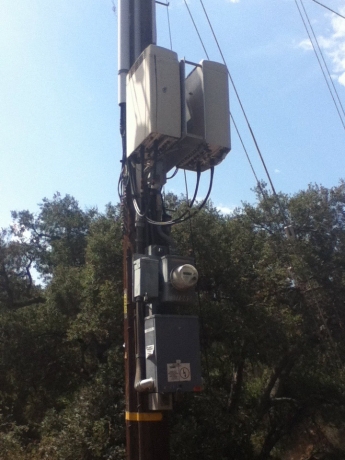 June 6, 2021 (Sacramento) - Community activists are urging California lawmakers to reject two bills that would limit local control in order to clear the way for 5G small-cell wireless equipment near homes, schools and businesses.

Supporters of the bills have cited the economic benefits of improved high-speed broadband. However, multiple cities are fighting the 5G rollout, citing concerns about health, safety and property values.
Doug Wood, founder and director of the nonprofit Americans for Responsible Technology, noted that the League of California Cities opposes both bills.
"It gives the telecoms free rein to install this equipment pretty much wherever they want, and puts unreasonable time limits on a city's permitting process," he said. "The only people benefiting from these bills are the telecoms, not Californians."
Senate Bill 556 would require municipalities to make space available at low rates for communications service providers. It passed the Senate and is now in two Assembly committees. And Assembly Bill 537 would force cities to go to court if they want to deny a permit for a location. It has passed in several Assembly committees with bipartisan support.
The telecom companies have argued that installing 5G statewide will give low-income communities a leg up. But Larry Ortega, with the nonprofit Community Union, said wired municipal broadband is a better option. He added that these bills do nothing to address cost to the consumer.
"You know, many of our kids are not going to afford 5G," he said, "so, there's going to be an increase in cost, which is the primary barrier in the digital divide."
In terms of health concerns, a 2018 study from the National Institutes of Health found radio frequency radiation - used in cell phones and 5G antennas - caused heart and brain tumors in male rats. However, the Federal Communications Commission has declared cell phones safe. Detractors say the standards the FCC used to make that determination are decades-old and flawed.

Canada is #1 in global rankings for internet speed, depending heavily on municipal broadband. There is more than one model that can work, for example South Korea has fiber optic going into most people's homes for about $20 a month. How did they do that? There is no monopoly on the fiber to the homes, companies are forced to share that cost then compete on offering better service and lower prices. Our oligarchs keep telling us that we can not be successful as Canada or South Korea in terms of broadband penetration and speed, and they own Sacramento. And yes Sacramento is controlled by Democrats, so you know who is responsible for this. Clearly, giving a few especially large companies more monopoly power just because they have bought off Sacramento is *not* the way to do this. This kind of thing has has left us at #27 in the world! We invented the technology and yet do it so poorly. We stick with the bad "natural monopoly" model, which has utterly failed. Are we stupid? Are we going to keep doing this to ourselves?