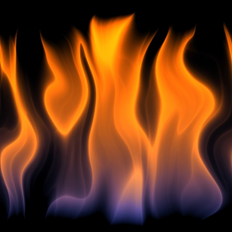 July 18, 2021 (Spring Valley) – A body has been found inside a mobile home at the Sweetwater Lodge Motor Home Park, 10707 Jamacha Blvd., unit 80 in Spring Valley. A 14-year-old escaped a fire shortly before midnight last night, but told Sheriff’s deputies that his grandmother did not make it out.

According to 619 News Media, the juvenile was screaming for help and neighbors tried to enter the residence by kicking a door and pulling windows open before firefighters from San Miguel Fire and Rescue arrived, but were unable to do so due to smoke and flames. View video.

Firefighters could not make entry either, finding the residence engulfed in flames.  Adjacent mobile homes were evacuated while the fire department contained the fire, preventing it from spreading to other units.

Firefighers later located a deceased person in the burned mobile home. The County Medical Examiner has not yet confirmed the identity, though

“The juvenile's parents were contacted, responded the scene, and were informed of the circumstances,” says Sgt. Greg Hampton. “The juvenile was transported to the hospital out of an abundance of caution due to possible smoke inhalation.”

Sheriff's Bomb/Arson detectives responded to the scene to determine the origin and cause of the fire.  The investigation is ongoing.

I'm glad the 14 y/o survived, although, whether he wants it or not, he will really need some competant grief and trauma counseling. Perhaps for the rest of his life to continually remind him if necessary that it wasn't his fault. Hopefully not meds (although listen to your doctor s/he knows better than me) as (at least one) trigger may be environmental rather than biological (but consult and listen to your doctor).

sorry, but had he died trying to save his grandma this story would be far more tragic. he's still a hero; he got himself out safely

He shouted and alerted neighbors but the fire was too intense --his grandmother would not have wanted him to die trying to save her when it was already too late for that.