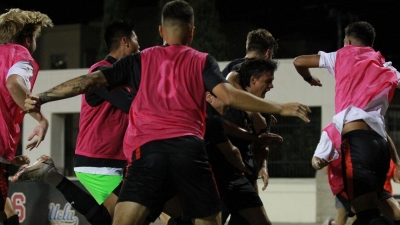 The Aggies were whistled for a foul and issued a yellow card with seven seconds to set up an Iñigo Villaldea free kick from 30 yards out. Villaldea’s kick was knocked down by a UC Davis defender and then Tevenn Roux was able to get a foot on the ball to push it past the outstretched arms of the Aggie keeper. With time running out, Blake Bowen ran it and kicked the slow rolling ball across the end line and into the back of the net with one second remaining on the clock to seal the game and keep the Aztecs undefeated.

“They tested my heart tonight. We took every single second of that match, but we tell our guys all the time it’s a 90-minute match,” Head coach Ryan Hopkins said after the match. “You just have to keep going and keep grinding and can’t get frustrated and stick to our principles, which I thought we did really well tonight. Credit to UC Davis, they are a good side, but our guys have so much belief and we are finding ways to win games. I can’t say enough about our whole team defense, they posted another clean sheet, which puts us in a good position to win.”

The Aztecs outplayed the Aggies in the first half, outshooting them 6-1 while controlling possession and pace. However, UC Davis held a 5-2 shot advantage in the second half, with both of SDSU’s shots coming in the final five minutes.

It appeared SDSU was headed for extra time for the third consecutive match, but then Donovan Roux was tripped up with seven seconds left to set up Villaldea’s decisive free kick.

For the Aztecs and goalkeeper Jacob Castro (2-0-2) it was their third shutout of the year.

The Aztecs have allowed just one goal through four matches this season, a span of 400 minutes.

SDSU is undefeated through its first four matches for the first time since 2016, which is the last time they made the NCAA Tournament.