October 4, 2021 (San Diego) – An estimated 10,000 people participated in the Women’s March in San Diego on Saturday, October 3, joining similar events in nearly 500 cities across the nation.  This year, organizers titled the event “March for Reproductive Rights” including protecting access to safe and legal abortions. Many voiced concerns over the erosion of those rights in recent years and fears that conservatives on the Supreme Court could overturn Roe v. Wade.

Supporters of reproductive rights have been spurred to action by a new Texas law which the Supreme Court refused to block. It bans abortions as early as six weeks, whenever a fetal heartbeat and allows any private citizen to file a lawsuit against anyone who helps a woman end her pregnancy, such as a doctor, friend or relative.

In the past 10 years, over 500 state laws restricting abortion have been passed; today nearly 90 percent of U.S. counties don’t have a single abortion provider and five states have just one abortion clinic left, according to Act For Women. 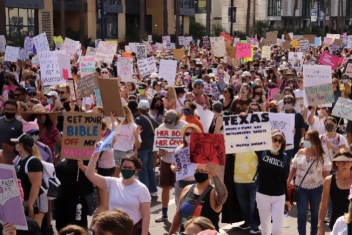 The event progressed peacefully, starting with a series of speakers and a march that began at the County Administration Building and progressed south on NorthHarbor Drive to Pacific Highway, then back. As noticeable as the sizeable crowd that had gathered in support of the event was the relatively small police presence compared to previous years, and the absence of opposition voicesand counter protesters at Waterfront Park.

Several speakers addressed the marchers, including Manzanita tribal Chairwoman Angela Elliott-Santos from East County, who spoke of how Native Americans revere women and voiced concerns over the erosion of rights for all women.

Senator Toni Atkins Shares her Experiences and her Commitment 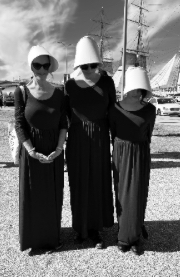 Senator Toni G. Atkins, representing San Diego’s District 39, declared, ”We march today because we will not go back!”

She recalled meeting Karen Bell, the mother of Becky Bell. “She was a young woman who did not want to disappoint her family. So, she got an illegal, unsafe abortion. And she died, never telling her parents that that’s what she had done. Her parents were staunch conservatives. Until they lost their daughter. And they said “Enough! I understand.” 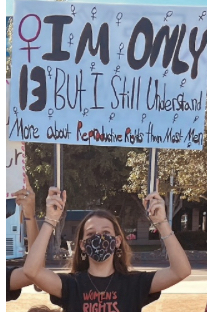 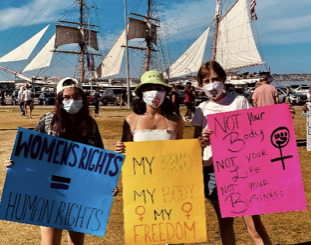 Senator Atkins assured that she and other California leaders, including Governor Gavin Newsom and Assembly Speaker Anthony Reardon, stand with Planned Parenthood and are committed to protecting reproductive rights.

“We are going to strengthen what we do in California,” she said. “California protects the rights and privacy of all of us to make these decisions. But we have to be stronger. Because we have to be a beacon. We have to be a place where people, where women, can come with their friends, and their families, and their allies, and feel safe, and know they’re going to get a service…. We’re going to have to make sure that we provide that access to those who don’t have it,” she concluded, adding that she remembers when women came from other states because they couldn’t get the service they needed there. 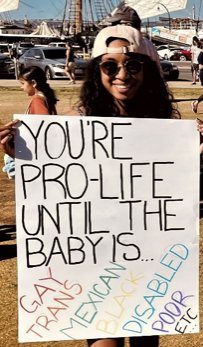 A video recording of Senator Atkins’ full comments can be found at https://youtu.be/UEKu4jQKGno

Rabbi Mari Koskie also addressed the thousands gathered for the march. “We know this is a sacred ground,” Stated Rabi Koskie. “We are beloved women in a struggle that has lasted all of our lives. And we have only one thing to say, and in one voice, “We won’t go back!”” declared Rabbi Koskie.

Rabbi Koskie continued, “This is the most holy cause of our lifetime. To own our own bodies, for the right to do with them, and live with them, and honor them, the way that we, and our very small group of precious beloveds, think that we ought to do at any given moment in our lives.” 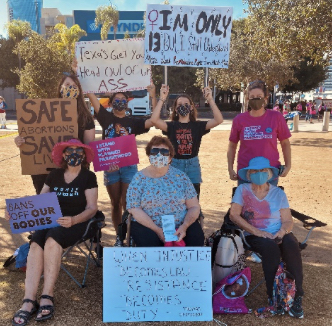 There was also a group of three generations of women from East San Diego County.

”I am concerned about poor women who cannot get abortions, especially in Texas, because of the new law,” stated Alice (13). “I believe that everyone should have rights. People have been fighting for women’s rights for years and we’re now in 2021 and we’re still doing it,” continued Alice.

“This is my third Women’s March, and I’m only 13. A lot of my friends are worried that they won’t be seen or heard, orhave their rights,” shared Alice. 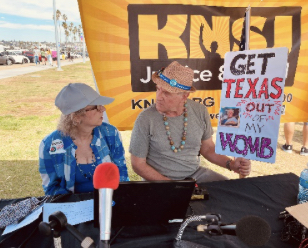 East County Magazine editor Miriam Raftery also hosted a series of interviews for KNSJ, 89.1 FM, radio with event organizers and participants, which the station plans to post audio of on its news site.

Fight for Reproductive Rights in Congress

Seeking to provide federal protections for women and medical providers in all 50 states, even if Roe v. Wade is overturned, the House of Representatives last week passed the Women’s Health Protection Act of 2021 (H.R. 3755) by a 218 to 211 vote.  The Senate is expected to take up the measure in a few weeks after first addressing budget and infrastructure measures, but the vote is expected to be closely divided in the Senate.

The bill would create a statutory right in all 50 states for healthcare professionals to provide abortion in some, though not all, cases.  It would establish federal law to codify Roe v. Wade, the 1973 Supreme Court ruling which guaranteed a right to abortion before viability, which is around 22 to 24 weeks.  The bill would also ban states from establishing restrictions on later term abortions, but only if a woman’s life or health is in danger.

The Liberal hypocrisy know no boundaries, and having seen/heard it time and time again, I still have to shake my head. Where is the "My body, my choice" crowd when the talk turns to forced vaccinations? Appalling, just shameful.