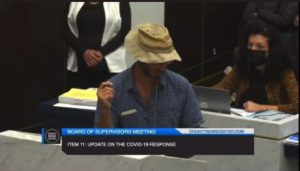 Update (11:15 a.m.) : See link at end of story regarding Jason Robo. Robo allegedly bills himself as a comedian.

November 3, 2021 (San Diego) – Personal attacks including profane and racist remarks by an anti-vaxxer during San Diego County’s Board of Supervisors meeting have prompted a prominent civil rights leader to call for limits on public speech.

A man identifying himself as Jason Robo testified that Chairman Nathan Fletcher should commit suicide, then made racial slurs against County Public Health Director Wilma  Wooten, who is Black. Among other things, Robo called Wooten a “f***king Aunt Jemima.”  (View video)

The tirade was prompted by Supervisors’ reconsideration of a mandate requiring new-hire employees to be vaccinated against COVID-19.  By a 3-2 vote, supervisors reaffirmed an earlier vote, with Supervisors Jim Desmond and Joel Anderson voted against the mandate, while Chairman Nathan Fletcher, Supervisor Terra Lawson-Remer and Vice Chairwoman Nora Vargas voted in favor. The revote was done after the County received a letter challenging the earlier vote based on an alleged Brown Act open government violation.

Fletcher affirmed that dissent is a healthy part of a functioning democracy, but voiced dismay over vaccine mandate opponents launching personal attacks on board members and county officials.

Rev. Shane Harris, President of the People’s Association of Justice  Advocates (PPAJA) and a national civil rights leader, announced after Tuesday’s meeting that the comments had “gone too far.”  He and other civil rights leaders held a press conference today to decry the statements and introduce a new County policy proposal that would ban racially inciteful remarks during Supervisors’ meetings and allow a speaker to be cut off after making a racially inciteful comment. (View video.)

In a press release, the PPAJA notes that Aunt Jemima logo is based on a “mammy,” or “submissive servant” who cared for a white master’s children.  In 2020, the Aunt Jemima brand changed the name, citing its racial insensitivity. View the PPAJA proposal.

But whether such a rule change would withstand a Constitutional challenge is questionable. Courts have long held that the Constitution protects even offensive and speech in public forums, with certain exceptions, such as speech that incites violence. Actual disruptions of meetings can, however, be prohibited and such speakers removed.  But it’s uncertain whether racial slurs would be viewed by courts as protected or disruptive.

An article titled “When First Amendment Rights and Public Meetings Clash,” published by the Municipal Research and Services Center in Washington state,

When writing and establishing rules of conduct, the governing body must be careful not to violate the protections that meeting attendees enjoy under the First Amendment. The Ninth Circuit Court of Appeals addressed this issue in Acosta v. City of Costa Mesa, 718 F.3d 800 (9th Cir. 2013), indicating where the line may lie between council rules that are enforceable and those that violate constitutional rights. In that case, the court held that the First Amendment requires a person’s speech in a city council meeting must actually disrupt a meeting before that person may be removed from the meeting. The case provides an example of language a council may adopt for such a proposed rule. The court looked approvingly on rules that stated:

It shall be unlawful for any person in the audience at a council meeting to do any of the following ... (1) Engage in disorderly, disruptive, disturbing, delaying or boisterous conduct, such as, but not limited to, handclapping, stomping of feet, whistling, making noise, use of profane language or obscene gestures, yelling or similar demonstrations, which conduct substantially interrupts, delays, or disturbs the peace and good order of the proceedings of the council. Id., at 816.

The Steinburg court explained that argumentative or disruptive behavior cannot be shielded by a claim of First Amendment rights, stating:

Officials presiding over such meetings must have discretion . . . to cut off speech which they reasonably perceive to be, or imminently to threaten, a disruption of the orderly and fair progress of the discussion, whether by virtue of its irrelevance, its duration, or its very tone and manner.

I'm processing just how much death we've witnessed lately and in a time of mourning where we're not sure if it's safe outside or even at times inside and it's very sad and so I am crying...

j anderson who has NO science background taking the right wing line.