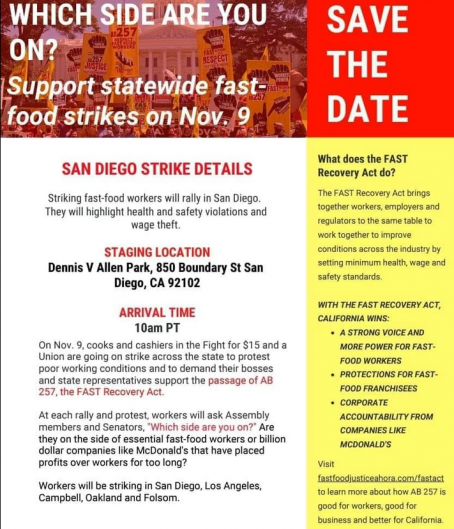 November 7, 2021 (San Diego) – Fast food workers in San Diego are planning to join a statewide strike on Tuesday, November 9.  Workers will rally at 10 a.m. at Dennis V. Allen Park, 850 Boundary Street in San Diego, to highlight health and safety violations and wage theft, according to a flyer. They will also be calling on state legislators to pass Assembly Bill 257, the Fast Food Accountability and Standards Recovery Act also known as the Fast Recovery Act, which was introduced by San Diego  Assemblywoman Lorena Gonzalez.

What the bill would do

The bill would create a Fast-Food Sector Council responsible for setting industry-wide minimum standards for wages, working conditions and training. The Council would hold hearings every six months and review standards at least every three years.  It would also make fast-food franchise owners jointly liable for violations of state employment laws.

The bill is supported by the Service Employees International Union and a coalition of other labor groups According to the flyer circulated by labor groups, “The FAST Recovery Act brings together workers, employers and regulators to the same table to work together to improve conditions across the industry by setting minimum health, wage and safety standards.”  For more information on supporters’ positions, the flyer lists the website https://fastfoodjusticeahora.com/.

An analysis on the bill’s fiscal impacts by the Labor Center at the University of California, Berkeley notes that fast food workers account for 3% of the state’s workforce, but are 2.5 times more likely to be enrolled in Medi-Cal than workers overall.  If the Council recommendations result in wage increases, it could reduce state’s costs for Medi-Cal and increase income tax revenues for California.

Advocates also contend that improving wages and working conditions could also help address racial inequality exacerbated by the pandemic, since 80% of fast-food workers in California are people than color. Two-thirds are women, many with children, so the measure also has the potential to reduce child poverty, the analysis notes.

The bill is opposed by the California Restaurant Association and the International Franchise Association.

In an article in the legal journal JDSupra, attorney Lewitt Hackman makes the argument that the bill could spell “impending doom” for the fast-food franchise business model.

“In a nutshell, the bill would allow the political party then in power in Sacramento to appoint 11 non-elected officials, only four of which have fast-food restaurant experience, to regulate the operation of independent and franchised fast-food restaurants in California,” the article concludes, adding, “This could be nothing short of a disaster for fast food franchisors, franchisees and their employees.”

Status of the bill

After passing two Assembly committees, the measure failed passage on the Assembly floor in June. But author Lorena Gonzalez requested and was granted reconsideration, then put the bill on inactive status. Given the statewide push by unions, however, Gonzalez may decide to revive the measure, which fell just three votes shy of passage in the Assembly, according to an article in Forbes which dubbed the measure “gone but not forgotten.”

And yet the GOP never throw's dread at those whose portfolios benefit from this Corporate Welfare! A system rigged for those that have more than they need at the expense of those who don't have enough. That's what Capitalism has come to mean.

You read the article. Why should taxpayers be on the hook for private jobs that require working people to be on the public role? This is just funding businesses that, if you believe in capitalism, need to be able to make a profit on their own. Without needing this handout from the public. If we can't figure out how to make fast food profitable, it needs to go out of business, and not being propped up by the state. Same goes for any business, make yourself good enough to profit without exploiting the taxpayer, or move to Texas, (and eventually, Vietnam, because those are the steps that marginal businesses follow these days...)
BUT THIS IS GETTING RIDICULOUS!!!