November 11, 2021 (San Diego) – San  Diego County Supervisor Jim Desmond spoke with East County Magazine via Zoom last week over his concerns about SANDAG’s planned mileage tax and its disparate impact on rural, mountain and desert residents whose communities are not slated for transit projects that the tax would fund, along with limited other transportation projects. The interview originally aired on KNSJ radio and can now be viewed by clicking the video on the left.

He also talked about other proposed taxes ranging from a sales tax increase to toll roads in our region. These include:

The mileage tax is part of a Regional Transportation Plan and focuses largely on reducing greenhouse gases. In theory it would ultimately replace transit fees, with mass transit eventually free. But that doesn’t benefit those who live in remote areas without access to mass transit. 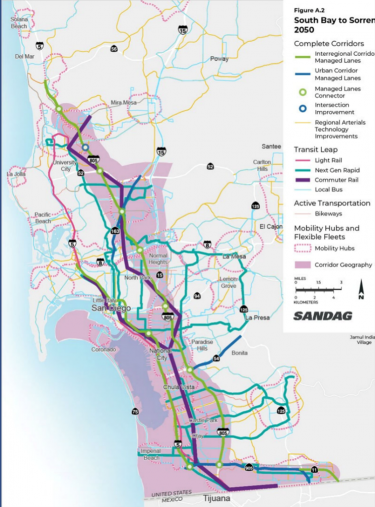 “At least 2/3 of the funds are going to active transit,” such as trolleys and rail, with most of the rest to parks, trails and bike lanes. Desmond notes, “Very little of it is going to go to roads.” (See map of proposed transit projects, right)

He objects to SANDAG previously not following up to widen State Route 52 and 67, as well as adding car pool lanes on highway 78.  “One of the aggregious things that SANDAG is doing is they’re not living up to the promises of the last Transnet Tax …and yet they have their hand out again,” he says.

Desmond calls the mileage tax a regressive tax that disproportionately affects those who must drive for work, school, or medical appointments from remote areas in the county, including "young families that will also be penalized" for taking kids to soccer and other activities.

ECM editor Miriam Raftery noted that many rural areas have poor bus service.  Desmond said this may be doubled, but said only 2.5% of people in the reigon ride transit. Even if that were to increase five-fold, 85% would still need alternatives to transit. SANDAG on Oct. 30 approved putting the tax into its broader regional plan that SANDAG will vote on December 10th. SANDAG has the final say on the plan, but they will have to go to the voters for the proposed sales taxes. As for the mileage tax, however, Desmond says SANDAG has the final say and does not have to ask voters for approval.

He says the regional plan “is not regional at all,” benefitting primarily urban areas of the county.  The plan is “embracing technologies of the past” he says, suggesting more should be done to encourage electric vehicles. He envisions induction chargers in freeways that could recharge electric and hybrid vehicles as they go along.

He also objects to raises that would result in a sales tax of nearly 10 cents plus addition of 819 mileage lanes of toll roads, a “big number” he notes, adding that he doesn’t yet know where those toll roads would be.

He predicts legal challenges are likely to be filed over the mileage tax, noting SANDAG has made assumptions that may not be accurate and is "trying to ram this down" the throats of taxpayers countywide.

Supervisor Desmond also discussed the weighted vote on SANDAG, which gives the cities of San Diego and Chula Vista a majority control, and how that has been detrimental to East County and North County cities.  The weighted vote was the result of a labor-backed measure backed by Assemblywoman Lorena Gonzalez. "The entire state voted on SANDAG's structure," says Desmond. "People who didn't even live here....and then we got stuck with it....It came down to her district, Chula Vista and San Diego, ended up with 50% of the vote."

Desmond, who was formerly on SANDAG until the new Supervisors board changed the designation, asks, "Why do we even show up anymore?  Our vote doesn't even count anymore...They get what they want and the rest of us end up paying for it."

He said the plan is also unfair to Native American tribes, since they are also paying for it, don't get transit and "they don't get to vote which I think is unfair. They should get to vote." Small cities have also lost their voices across the region.

"They're just out here again with their hand out and a new set of promises. They haven't fulfilled their last set of transportatoin plans," Desmond states.

He urges people to "vote no" on taxes that SANDAG supports until we get "a real regional transportation plan" that benefits the entire region. He also urges East County residents  to show up at SANDAG meetings to speak, where those who testify are mostly people who will benefit from transit, including union members promised jobs.  He indicated SANDAG intends to have unions put the measure on the ballot due to the lower voter approval threshhold needed for a non-governmental entity.

The whole point of a mileage tax is the same as Biden's shutting down our oil production. Make traveling by car so expensive, the poor and middle class in our population will be forced to use mass transit, which is the goal of the Green Deal by the Left. They State lied to us saying the new gas tax was the answer to repairing our roads and "dangerous" bridges. Then instead of investing in roads and bridges, put the new money into their Green projects like the bullet train to nowhere, and adding density in every suburb and community with new affordable housing, creating more revenue for them, but still not affordable due to their fees and taxes adding over $100,000 to every home built.
know it all.... tell us how the electric cars will pay for road maintenance???? Desmond just another uneducated talking head. who fooled the people to get elected!!!
Just as adding a tax at the gas pumps, the same could apply to charging stations for electric cars. Even the ones at home could be metered if they choose to. But why charge those who already paid their share at the pump instead of just charging those who use no gas. Another argument is, which do you really want? Clean air or more money for the government?