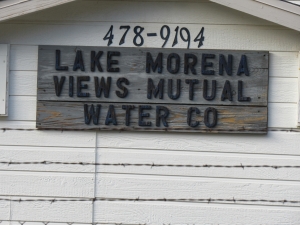 January 8, 2021 (Lake Morena) – For more than two years, Lake Morena Village area water users have been drinking bottled water because of formidable nitrate levels in the region’s wells, the main source of water for drinking in the rural San Diego county burg.

In September 2019, the county issued a do-not-drink order for about 125 customers of the Lake Morena Views Mutual Water Company, one of the two main water suppliers in the area.  The state recently approved grant funds to eliminate the contamination, but the process moves slowly – meaning frustrated residents may be without potable tap water for another two to three years.

“I am wondering what the effects will be on all of us in time to come. How can it take over two years to fix the issue?” asks Claudia Millerbragg, a Lake Morena Village residents in rural Campo. She says shareholders are not given enough information, adding,  “Because we are in an underserved community no one really seems to care. Can you imagine this happening in La Jolla?"

After temporary cuts in water deliveries in December, which the district says has been resolved,  she opined on social media, “Perhaps I should just pay half of my water bill.”

Karen Russell, operating manager of the neighboring Lake Morena Oak Shores Mutual Water Company, says feral cats, wild animals and companion pets in the area are at risk, because animals can be negatively affected by drinking water that is high in nitrates.

Millerbragg says her dog, Lucy, became ill and this week, had to be put down by a veterinarian.  “When I told him about the elevated levels of uranium and nitrates in the water, he told me do not give it to any of my animals. That it would endanger their health,” Millerbragg says. “All of my animals now drink bottled water.”  She also voices concern over showering. “The skin may not absorb the water, but water is splashed into personal body parts and eyes. Sometimes the mouth. 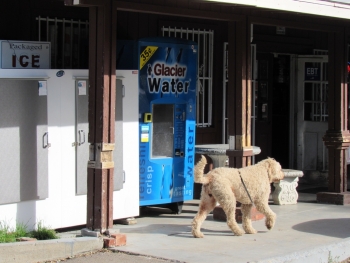 “The high nitrates are not good for elders or infants and some say it affects animals,” acknowledges Wellman Simmonds, the manager of operations at Lake Morena Views Mutual Water Company, one of two local water agencies in the area. “I’m looking forward to getting these people some water they can drink. And I’m right in there with them. I live here, too.”

For several years on Wednesdays, Simmonds and his crew have been delivering bottled water to residents in the area. Locals can also fill up their water at the Oak Shores Malt Shop in Campo, and get reimbursed by the nonprofit Views company for their purchases.

Photo, right: Labradoodle strolls past Glacier Water dispenser at Oak Shores Malt Shop, where many residents have been picking up bottled water over the past two years.

Nitrate levels fluctuate because of rainfall and runoff, but the maximum nitrate level allowed in California is 10mg/L.

Nitrate occurs naturally in the environment in small amounts and is typically found in rainwater, streams and in the groundwater table, as is the case at Lake Morena Village.

The State Water Resources Control Board, part of the California Environmental Protection Agency, believes that the nitrate contamination in the area is likely due to septic systems in the community, but notes that no studies have been done to characterize the basin that it is aware of.

The U.S. Centers for Disease Control, page on nitrates in well water indicates nitrate contamination can also be caused by chemical fertilizers, industrial waste, and other causes.

Simmonds says he showers with the water and feels safe. Reports from the state say that consumption is the only concern with water over the 10 mg/L limit. Bathing and swimming in water contaminated with nitrates is considered safe if no water enters the mouth. 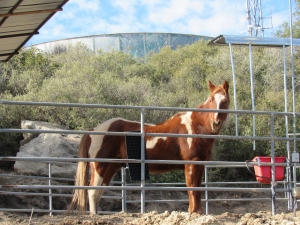 According to the State Water Resources Control Board, nitrate can interfere with the ability of red blood cells to carry oxygen to the tissues of the body, bringing on methemoglobinemia, a condition in which a higher-than-normal amount of methemoglobin is found in the blood. Methemoglobin is a form of hemoglobin that can’t carry oxygen.

Photo, right: Horse Starshine in front of water storage tanks.  Some residents voice concerns over health impacts of nitrate-contaminated water on pets, livestock and wildlife as well as humans.

Nitrate is of greatest concern in infants because their stomach environment enables conversion of nitrate to nitrite, which is then absorbed into the bloodstream. The effects of nitrite are often referred to as "blue baby syndrome” and in that case, if the disease remains unattended, it can lead to complications including death. High nitrate levels may also affect the oxygen-carrying ability of the blood of pregnant women.

Long-term, it may also cause cancer in adults. A study published in 2019 in the journal Environmental Research found 12,500 cancer cases annually may be directly linked to nitrates in water.

Boiling water, a way to reduce some illness-bearing additives, does not lower nitrate levels. In fact, according to the State Water Resources Control Board, excessive boiling could even create more concentrated nitrate levels, since nitrates remain left behind when the water evaporates.

According to a CDC advisory,  it’s best to use disposable dishes to avoid washing plates with nitrate-contaminated water.  Bottled water should be used for cooking and ice from a home freezer should be avoided unless your home has a reverse osmosis or distillation system to treat your tap water. Clothes, bedding and linens, because they are not placed in the mouth, can be cleaned after being laundered in nitrate-heavy water.

Does filtration or distillation help?

There is conflicting information on this.  According to the CDC advisory, reverse osmosis or distillation systems can either be installed on a single tap or installed to treat all of the water entering the house. All filter systems or treatment units need maintenance or contaminants may accumulate in the units and make your water worse, the CDC cautions. Some companies may make claims about the effectiveness of their water filter treatment units that are not based on science. Organizations that test or certify water treatment units are:

However, according to the Community Public Health site I in Christchurch New Zealand, nitrates are difficult to remove from water.  The site warns that “common household cartridge or carbon filters, boiling water and chemical treatments (e.g. chlorine) will not remove nitrate. There are three methods that do remove nitrate from drinking water: distillation, reverse osmosis and anion exchange. These processes are expensive and potentially unreliable.”

Solutions on the horizon

Simmonds says he is waiting for the state’s approval to utilize the company’s nitrate treatment unit that  cleans and sanitizes the water -- and is already operational. He said the company was using it before it was cleared to do so by the state and got dinged for it.

Those directives include public notice about nitrate levels in billing mailers, monthly nitrate samples taken from three of the four wells on site, using only certified water system operators to handle the company’s needs and recording and submitting to the state the monthly production of all wells. 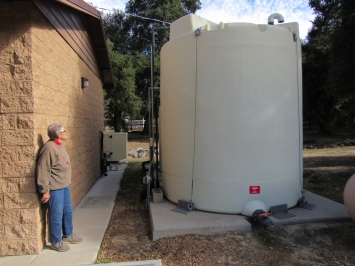 Lake Morena Views also plans to join forces with the other local water agency in the region, Lake Morena Oak Shores Mutual Water Company, which has about 210 customers. That consolidation needs to get state approval, which has been “tediously slow” in coming, according to Karen Russell, operations manager of the Oak Shores company.

The nitrate contamination problem is expected to be resolved by consolidation, mainly by utilization of the Oak Shores’ nitrate treatment system and by combining the two water systems’ source wells.

The water in Oak Shores’ five wells is safe for drinking, and Russell said empathizes with the people nearby who have been waiting for drinking water from their taps for years.

She told ECM that the consolidation likely won’t go through until 2024.

The state’s Division of Drinking Water did not order the water systems to consolidate, Sterchi said, but rather was selected by Lake Morena Views as part of the corrective action plan which followed an earlier compliance order.

“There are many benefits to a consolidated water system such as shared staffing, simplified monitoring and reporting, and pooling of resources and assets which provide flexibility and reliability,” Sterchi added.

Sterchi said Lake Morena Views has applied for several grants and has been approved for the following funding:

Simmonds asked that residents in the Lake Morena Village visit http://www.lmvwater.com for more information, and he encouraged constituents to show up for the Lake Morena Water District’s board meetings. The board meets at 9 a.m. on the first Saturday of the month at 29856 Mallard Drive in Campo.

While efforts continue to find a long-term solution, like the beleaguered residents of Flint, Michigan, Lake Morena Village residents remain without drinking water flowing from their taps—but continue to pour out money to pay their water bills.

Shareholders are not kept informed about plant updates. I went to a couple of meetings and was even on the board for a short amount of time. I left the board and stopped going to meetings as I felt my questions were being ignored. We get nitrates level notices with our bi monthly bills but nothing more. The only sure thing about Views is that the bill will arrive and it is expected to be paid. Who else in San Diego county has had non drinkable water for 2 years and 4 months with no end in sight?