January 19, 2022 (El Cajon) -- Despite a statewide mask mandate that was declared on December 15 and extended until February 15, Mayor Bill Wells as well as Councilmembers Michelle Metschel and Phil Ortiz, did not wear their masks at the January 11, City Council meeting. Councilmember Steve Goble removed his mask when he made comments.

All others in attendance, from supporting staff, public officials, police officers and members of the public, obeyed the mandate by wearing their masks at the meeting.  Topics discussed included how federal relief funds were spent, whether grants such be provided to businesses that opened during the pandemic, how funds earmarked for downtown improvements should be spent, and a potential new veteran’s memorial.

The city manager sent a directive indicating that to comply with the new state mandate, masks would be required in Council chambers. But a city insider told ECM the city manager has no authority to enforce that rule with elected officials, only staff or members of the public. 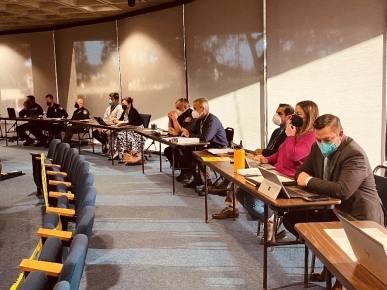 The statewide mandate was issued due to the rapid rise in COVID-19 cases driven by the fast-spreading Omicron variant. During the last week in December and the first week of January, the statewide seven-day average case rate increased by "more than sixfold" as hospitalizations across the state have doubled, the California Health Department said.

There was one public speaker, Suzanne Hanson, who attended to make a public comment. “Hello, my name is Suzanne Hanson and I’m in favor of mask mandates,” said Hanson. “As a molecular geneticist, I know the ‘ins-and-outs’ of viral transmission, and especially about the evolution of variants. We have a highly transmissible variant, Omicron, that produces a less lethal disease. But what you need to understand is that the more people infected, regardless of asymptomatic or mildly ill, the more likely a variant will evolve that is both transmissible and deadly,” she warned.

“My second point is that the virus could be stopped by vaccination and masks. The viral particles at the microscopic level are transmitted by coughing, laughing, talking, and even just breathing. It has been demonstrated, over and over again, that masks stop the form of transmission, and the formation of new, more lethal, variants,” continued Hanson.

“Finally, as Christians, it is an important tenant of the faith to care for others and protect them. Masks serve two purposes: One is to protect the person wearing the mask, but, just as important, the other is to protect your spouse, your parents, your children, and your fellow man. It is the Christian thing to do, and it is the rational thing to do. Thank you very much,” Hanson concluded.

There were three administrative reports. The first was regarding the location of a new Veteran’s Memorial.

The current Veteran’s Memorial provided by American Legion Post 303 and was dedicated on November 11, 2000. It is located adjacent to the Council Chamber and The Magnolia.

Working with local veterans, and leaders with American Legion Post 303, two locations are, being proposed for a new Veteran’s Memorial. Option 1 is on the Prescott Promenade, at the south wend next to Lexington Avenue. Option 2 is adjacent to the Public Safety building.

The next steps include a possible issuance of a Request for Quotation (RFQ) for design assistance, and authorization to engage the community and the various veterans’ groups for additional input on how best the memorial can honor our veterans and their dependents.

The second administrative report was an update on $30 million of expenditures related to the American Rescue Plan Act. 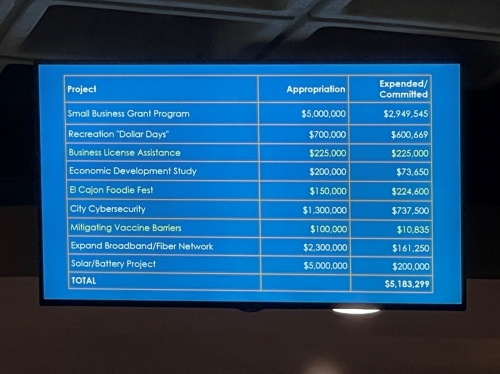 Of note are two items: Foodie Fest was overbudget by $75,000, but according to the report, that was because this was the first year for the event and the initial budget was just a rough estimate.

Secondly, $100,000 was allocated for mitigating vaccine barriers, but only $10,835 was spent. The program is completed, leaving nearly $90,000 for reallocation despite COVID rampant in the region.

A hefty portion of those federal funds were expended through the Small Business Grant Program. 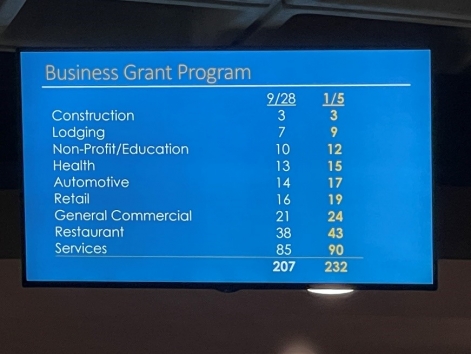 Since the end of September, 25 businesses applied to the grant program.

Councilmember Goble pointed out that businesses that started after January 2022 are not eligible for the business grants. These businesses have hired employees, but have lost them to other businesses who were able to apply for the grants, and received the $5,000.

Goble proposed allowing businesses that opened after January 2020, through December 31, 2021, be allowed to apply for grant funds for 30 days, or some appropriate amount of time. After that, the grant program could be closed.

A final decision will be made at the Council’s upcoming Goal Setting session.

The city proposed a pilot program to use social workers to help support police officers on calls that don’t require police use of force or law enforcement, but the county is about the launch a county-wide program. The city’s recommendation is to wait to see what the county program is before moving ahead on the pilot program.

A discussion ensued about homelessness, the cleanliness of city streets, and the need for power-washing around homeless encampments.

Councilmember Goble recognized that there is about $350,000 in available funds and recommended city staff to consider ideas and possibilities to beautify downtown El Cajon, with public art or other possibilities, and efforts to get people to visit restaurants in El Cajon, especially if they participate in Live Nation entertainment events.

Mayor Wells expressed his concern that the city has such a surplus in funds, and that the assessment district isn’t using the funding for what it is meant for. Wells recommended to city staff that the funds should be used to bring in more businesses, or people who are going to do business in El Cajon, perhaps by having a broker on the payroll and measuring the person’s effectiveness by specific outcomes.

Councilmember Kendrick shared that the surplus is an anomaly and exists only because so many events had to be cancelled in the past year due to COVID. He advised caution in making any commitments based on this unique surplus because those funds might not be available in subsequent years.

Video recording of the full Council meeting can be found at https://elcajonca.new.swagit.com/videos/152758.

wells who believes he knows more than the medical people out there. maybe he will get covid and DIE!!! because he is probably spreading it to everyone around him