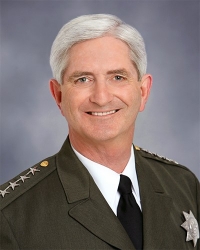 January 19, 2022 (San Diego) – Sheriff Bill Gore today announced that he will retire effective February 3 after 51 years in law enforcement, nearly a year before his term of office would have ended in January 2023. Gore was appointed Sheriff in 2009 to fill a vacancy left by the retirement of Bill Kolender, later winning elections three times.

Gore’s retirement opens the door for a new Sheriff in town for the first time in 12 years.  Four candidates have announced plans to run, including Undersheriff Kelly Martinez, who Gore has endorsed. Other candidates include retired Sheriff’s Commander Dave Myers, Deputy Kenneth Newsom and Assistant City Attorney John Hemmerling.

Undersheriff Martinez will become Acting Sheriff upon Gore’s retirement. County Supervisors will convene in March to consider appointment an Interim Sheriff, according to Nathan Fletcher, Chairman of the Board of Supervisors. But Fletcher says he opposes naming any candidate running to the post.

Fletcher says it would be “inappropriate for us to put our thumb on the scale this close to the election by appointing a person who is a candidate for sheriff.” In a statement, Fletcher adds, “The previous board of supervisors had a habit of appointing their chosen candidate for countywide offices very close to an election.  I didn’t think it was right for them and it would not be right for us.”

Martinez also issued a statement indicating she would not accept an appointment as Interim Sheriff if offered, stating, “The people of San Diego deserve a fair race for Sheriff as well as an appointment process they can trust.”

The county will announce a public process for people to apply to serve as Interim Sheriff, with opportunities to vet the applicants and allow full public input. In a statement, Fletcher indicated the Interim Sheriff will be someone who aims to reduce violent crime, fully support efforts to improve jail conditions, embrace best practices for leading a law enforcement agency and demonstrate a commitment to racial justice.

Supervisor Joel Anderson, who represents East County communities in his Second Supervisorial district, says, “I am grateful to Sheriff Gore for his decades-long career in law enforcement, and especially for his 12 years of service as head of the County’s Sheriff’s Department. Gore has many things to be proud of, including lowering the recidivism rate in County jails and improving the concealed weapons license process. Under Sheriff Gore’s leadership, this year the Sheriff’s Department successfully shut down all known illegal drug storefronts in the unincorporated communities,” the statement from Anderson continues. “My staff and I wish him and his family the best.”

Sheriff Gore began his law enforcement career in 1970 with the Federal Bureau of Investigation (FBI).  He rose to the rank of Assistant Director in Washington, D.C. and also served as the Special Agent in Charge of the FBI field offices in San Diego and Seattle.

After 32 years with the FBI, he retired and worked for one year as the Chief Investigator and Special Advisor to newly elected San Diego County District Attorney Bonnie Dumanis.

In 2004, then-Sheriff Bill Kolender appointed him as the Assistant Sheriff overseeing the Law Enforcement Services Bureau.  In 2006, he was appointed as the Undersheriff, overseeing the Sheriff's Department's daily operations until his 2009 appointment to serve as Sheriff and subsequently was elected by voters and twice reelected, serving 12 years in the office.

"Serving as your Sheriff for the last 12 years has been one of the most rewarding experiences of my law enforcement career,” Sheriff Gore says. “ I will always be grateful to the residents of this county for their continued confidence and support during my tenure.  It has also been my honor to have had the daily support from the extraordinary men and women of this department who sacrifice every day for the citizens of San Diego County.”

He praised his wife for making “many sacrifices in support of my career, including nine moves around the country and the challenges involved in three county-wide elections.  In retirement, I will have the opportunity to give my full attention and support to her as she has done for me during our 43 years of marriage.”

A statement from the Sheriff’s department reads, “Sheriff Gore has dedicated his life to public safety in San Diego and nationally.  Few individuals have devoted more time, energy and service to others.  The Sheriff's Department is grateful for his service and his many accomplishments.  We wish him and his family all the best in their next chapter.  He will be greatly missed.”

Dave Myers has worked in law enforcement for 35 years.  At the Sheriff’s Department he worked in many positions before being named Commander, overseeing 24 patrol stations and substations. He’s managed the Special Investigations division including homicide, narcotics, terrorism and gangs. He received a medal of merit from the National Association for work along the border.

His website states, “I am running for Sheriff to change the culture of law enforcement to one that respects people of all genders, sexual orientations, identities, races, ethnicities, and socioeconomic statuses. I promise that my campaign will be one of inclusion. I am the only candidate with the most experience with the Sheriff’s Department, and the only one that stood up in the trenches to fix the many problems. I’m clearly the best choice for the job, it is time for a New Sheriff in Town.”

Myers, who previously ran for the office, has been openly critical of Gore on issues including the county’s high rate of jail deaths, racial profiling, evictions during COVID, and more. His endorsements include several Democratic clubs.

Kelly Martinez has worked as a deputy, sergeant, and captain assigned to the Alpine Rural Command and then as Special Assistant/Tribal Liaison. She’s also been a commander before her appointment as Undersheriff running day-to-day operations at the Sheriff’s Department.

“I’ll work hard to earn the support of San Diego County voters who want a sheriff with experience and commitment to public safety,” she said in a recent statement.  She has also partnered with the county on non-law enforcement responses to non-crisis situations. and help the homeless.. She wants to invest in jails, improve transparency to the public, shut down illegal marijuana dispensaries and have better monitoring of sexual predators, among other priorities.

A former Republican who recently became a Democrat, Martinez’s endorsements include Sheriff Bill Gore, the San Diego Deputy Sheriffs Association, and Nathan Fletcher, Chairman of the Board of Supervisors, according to her website.

According to his website,  he has “zero tolerance for behavior that violates the noblest values of our Sheriff's Department. He believes in compassion, fairness, and diversity that reflects our community. He will work hard to stem violence and help victims of crime. Rebuilding morale and rewarding the efforts of those who work hard to keep our communities safe are also integral to setting a higher standard of excellence. John's priority is to bring about real results through strong leadership, collaboration, and innovative techniques when common solutions fail.”

Kenneth Newsom served with Oceanside Police and in the U.S. Marine Corps before spending 20 years in patrol or traffic.

He does not have a website, however in an interview with the San Diego Deputy Sheriff’s Association, Newsom said he would be “hands on” and pledged to visit each Sheriff’s patrol station, courthouse, and detention facility to speak with deputies and get their input.  “I won’t make promises to `fix’ an issue but I will look into them and try to correct or improve them,” he said, adding that the department “needs a Sheriff wo has worked in the trenches” and has “experience beyond a desk.”

the old boys and girls club is alive and well. lets hope this holds true! "But Fletcher says he opposes naming any candidate running to the post."