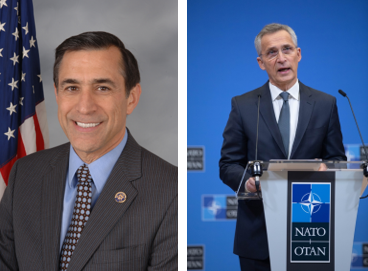 "This is a disastrous day for free nations everywhere and a direct assault by tyranny and aggression that will compel the world to take notice,” said Issa, a Republican.

He added, "This is also a defining moment for the Biden Administration, which has manifestly failed to bolster a coalition of allies and partners to keep and secure the peace."

But Issa said, "At this time, the credibility of this White House is on the line, and we need the kind of of leadership from the President that we clearly have yet to see. "America should stand with Ukraine and its people in their hour of need. They are not alone in this fight. America and NATO are being tested. And at this moment, they are failing that test,” said Issa, but did not specific exactly what actions he believes the President or NATO should take.

The European Union and some European nations have also imposed similar sanctions.

NATO, the North American Treaty Alliance, held an emergency meeting today. NATO Secretary Jens Stoltenberg condemned the Russian attack. The Ukraine is not a  NATO member, but Stoltenberg addressed concerns that Russia might next threaten other European nations.

“Today, the North Atlantic Council decided to activate our defence plans, at the request of our top military commander, General Tod Wolters,” the NATO secretary said. “This is a prudent and defensive step to protect and shield Allied nations during this crisis. And it will enable us to deploy capabilities and forces, including the NATO Response Force, to where they are needed.”

He added that in response to Russia’s massive mlitarybuildup, NATO has strengthen its land, sea and air defensive forces while Allies from North America and Europe “have deployed thousands of more troops to the eastern part of the Alliance. And placed more on standby.  We have over 100 jets at high alert, protecting our airspace. And more than 120 Allied ships at sea, from the High North to the Mediterranean” to shield Allies from Russian aggression.

The NATO leader added that he has called a virtual Summit of NATO leaders for tomorrow.

from the jail bird and tRump sucker issa. go back into your hole!