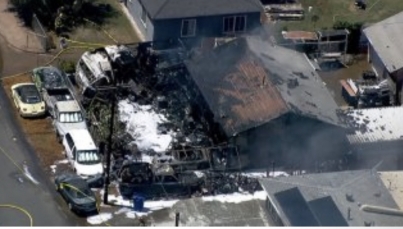 May 6, 2022 (El Cajon) – One person is dead and a woman in her 60s suffered moderate burns after a man being served with an eviction notice at 1282 Redwood Avenue in El Cajon hurled incendiary devices at deputies.

Court Services Deputies with the San Diego County Sherriff’s Office attempted to serve a family-initiated eviction on the male resident in his 60s earlier today.  After identifying themselves as law enforcement and receiving no response, the deputies found the door was barricaded from inside. “At that time, several incendiary devices with what appeared to be a flammable liquid were thrown in the direction of the deputies, immediately engulfing the structure in flames,’ says Lt. Randy Soulard with the El Cajon Police states.

As the structure continued to burn, an adult woman in her 60s believed to be the suspect’s girlfriend, an El Cajon resident, escaped the building through a window and was taken to safety, according to Lt. Soulard. The woman, who suffered moderate burns, confirmed the suspect was still inside the residence.

Officers from ECPD, firefighters and medics from Heartland Fire and Rescue, and San Miguel Fire Protection Unit, and the Bomb/Arson Unit of the San Diego County Sherriff’s office all responded to the scene.

After the fire was extinguished and the scene rendered safe to approach, El Cajon Police Officers were able to conduct a visual search of the completely burned structure.

Officers discovered the burned remains of an individual in a bathroom of the residence. The identity of that person has not been determined at this time, pending a forensic examination.

Other than the male suspect, no other persons were believed to be inside the residence when it was burned. El Cajon Police is not looking for any outstanding suspects and there is no threat to the public at this time.

No public safety personnel were injured during this incident. The residence at 1282 Redwood Avenue was determined to be a total loss. No neighboring structures or property were damaged by the fire.

The woman who was able to escape the flames is being treated at a local trauma center with non-life-threatening, moderate burns. The male suspect in this case, an El Cajon resident, is described as an adult male in his 60’s. The identity of the suspect in this case is not being released at this time pending the investigation of this case and notification of next-of-kin, if necessary.

The El Cajon Police Department thanked firefighters and paramedics from both Heartland Fire and Rescue and the San Miguel Fire Protection District, deputies from the San Diego County Sherriff’s Office, as well as San Diego Gas and Electric.

“This rapidly evolving incident was a testament to the collaborative relationships that have been built between public safety agencies to better protect and serve our communities. By working together, the scene was quickly stabilized without further threat to the surrounding neighborhood,” Lt. Soulard says.

The loss of a loved one can be difficult. You have my condolences.
sorry for your loss, I feel your pain,

It's been difficult, though Mom had a long and good life.

The female made it out, the male resident who was being serve a family-initiated eviction, seems not to of made it out
"WOMAN’S BODY FOUND IN BURNED HOME" no womans body was found they said according to the article "Officers discovered the burned remains of an individual in a bathroom of the residence. The identity of that person has not been determined at this time, pending a forensic examination."

Sorry for the misread.  I've been distracted and running on little sleep this week due to losing my Mom.