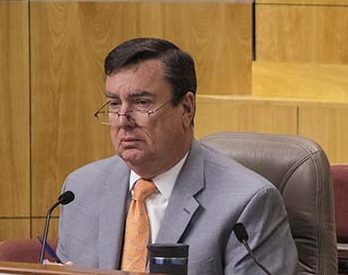 May 12, 2022 (San Diego’s East County) -- County Supervisor Joel Anderson has sent a formal request to the County’s Chief Administrative Officer and Sheriff, urging them to take action mirroring recent action by the California Department of Transportation (Caltrans) to remove encampments along public roadways that pose critical safety concerns. Caltrans’ clearing of an encampment in the Berkeley area was upheld by the U.S. Court of Appeals for the Ninth Circuit on April 27.

“The Governor is taking action to protect lives by clearing dangerous encampments on roadways and the County should be working in step with our state partners,” shared Supervisor Joel Anderson. “The County Department of Homeless Solutions and Equitable Communities has spent two months connecting the unsheltered population at the North Magnolia Avenue encampment to resources and housed over 60 individuals. But we cannot wait for someone to be injured or killed by a car before we take the next step to clear the tents that remain on this busy, dangerous street.”

One such encampment under State Route 67 along Magnolia Avenue in unincorporated El Cajon has been the subject of long-standing complaints by the city of El Cajon.  The camp has been linked to several crimes including the arrest in recent days of an alleged serial retail thief and a man found living at the camp with a missing teenage girl. Area residents have also complained that the encampment blocks the sidewalk and poses sanitation issues, with trash strewn about.

Since March, the County has focused resources and personnel to help those at the camp willing to accept housing, mental health services and other assistance, as well as focusing law enforcement resources. In addition, the County has held an East County Homeless Resource Fair as a one-stop shop for unsheltered people to get resources such as hotel vouchers, hygiene kits, and help with everything from employment to legal services, Anderson’s memo notes.

A prior court case has held that cities and counties can’t clear away homeless camps unless housing is available to residents. But the new court action paves the way for jurisdictions to remove encampments along roadways if they pose critical safety concerns, which is arguably the case for the Magnolia encampment and potentially others.

why don't you move them to your house?