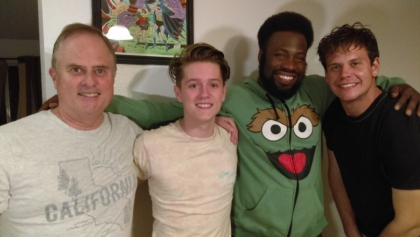 Photo, left to right: Councilman Gary Kendrick with his son, TJ, and two formerly homeless men they have taken into their home, Tony and Michael

November 24, 2016 (El Cajon) -- It’s rare to find elected officials willing to stand up to special interests or cast votes unpopular with vocal constituents, doing what he or she believes is right for the community and for people in need.

El Cajon Councilman Gary Kendrick has bucked big alcohol and tobacco industries. He’s fought to keep cigarettes out of the hands of kids and liquor away from children and public drunkards.

He stood up to support a center to help the homeless despite neighbors’ opposition—and he’s taken homeless people into his own home.

Despite threats from monied interests to oust him for his efforts, he won reelection handily in 2014—proving that political courage need not be political suicide.

The year is 2003. The entity now known as the East County Transitional Living Center (ECTLC) is attempting to turn a seedy hotel into a faith-based discipleship program for homeless and near homeless men, women and children.

Neighbors are furious. Business owners and residents show up en masse to oppose the project.

“I thought it was going to turn me into a one-term Councilmember,” Kendrick tells East County Magazine, “but I thought there has got to be a reason I am on this Council, and they’ve proven to be very good neighbors. The man from the shop across the street who testified against it called me to let me know what good neighbors they have been and thank me for voting the way I did.”

Residents regularly complain at Council meetings that an overwhelming number of El Cajon homeless resources are religious, though the city funds only a non-religious portion.

Kendrick defends their use. “The ECTLC has been shown to be more successful than non-religious programs.”   Kendrick has also said if a non-religious group wanted to propose a program to help the homeless, he is open-minded and would consider funds for that, too.

The program does have a non-religious component that receives city funding.  There is also a longer faith-based program that is privately funded.  The program has its critics, largely based on lack of a longer program for those of non-Christian faiths.  But the ECTLC has unquestionably been successful in helping many homeless people transition off the streets and become productive members of society.

Earlier this year, Kendrick called Pastor JD Loveland to offer two of his formerly homeless graduates rooms in his own home, formerly occupied by Kendrick’s sons.  Daniel, Kendrick’s oldest is a creative executive in Hollywood and his middle son Jesse is a biochemistry major at UCLA.  TJ, who Kendrick raises now as a single father after a divorce, will graduate high school with as many as 43 college units. 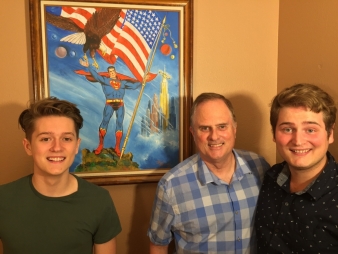 “I knew that hosting an ECTLC graduate offered me a degree of safety,” Kendrick says of seeking responsible tenants.  But he also believes it’s important to give back and help once-homeless people get a new lease on life.

He hosts Michael and Tony. Michael was unable to enroll in school as a teenager in part due to being in and out of Los Angeles hotels and motels with his mother. But ECTLC gave them a second chance and they both seized it and became graduates. Now they work in construction and attend church services several times per week.

When asked about the difficulties of co-existing with new roommates from the East County Transitional Living Center, Kendrick says “My biggest frustration is when the dishes get put back in the wrong places after being washed; I have a separate place for Tupperware, that’s about it.”

You can find out more about hosting an ECTLC graduate by visiting the organization’s website.

Kendrick came from very humble beginnings, with a father who worked in the silver mines after dropping out of high school in the Great Depression.  Following the death of his father at age two and mother at age 12, his grandfather stressed the importance of hard work and education.

Self-sufficiency was necessary, with Kendrick paying his way all the way up through graduate school by selling comic books. “I took all my savings of $215, mind you that was when minimum wage was $2/hour, and bought a man’s entire booth at Comic-Con. I organized them that night and walked out of that show with $600.”

“You have no idea how much space 100,000 comic books take. We had them delivered to our home and it took up almost the entire garage,” Kendrick recalls.

Perhaps his time as a comic book distribution guru prepared him for the real life saga and helped him stand firm in the face of pressure.

“Our ordinances have teeth in them, and they’re made to work. Since we’ve passed our tobacco ordinance we’ve lowered the percentage of stores that sell to children from 43% to less than 1%.” he told the East County Magazine.

On the ordinances, Kendrick explains, “Under California rules, sting participants can’t lie about their age. But in real life kids trying to buy alcohol of course say they’re 21. So we changed the way we conduct sting operations to allow for them to more accurately reflect real life scenarios. In our ordinance, our sting participant is allowed to lie, like they would in real life, and say ‘Yes, I’m over 21’ and that’s a big difference.”

Kendrick’s leadership, moral compass and compassionate conservatism has made a big difference in the lives of many, including his sons, two formerly homeless roommates, and the people he serves as Councilman in El Cajon.

He is also an avid East County Magazine fan, checking the site every day as part of his morning routine. “It’s really the only place for (comprehensive) local news,” says Kendrick.

Please make sure our mental hospitals let y/our patient write and plan for good. If you need flexible plastic, I'll have you know; San Diego makes some of the best! I believe the patent belongs to the City of Chula Vista c/o Michael Meacham in our contest