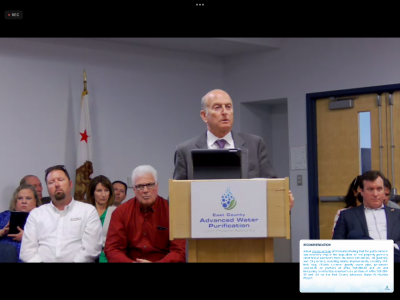 May 23, 2022 (Santee) -- The board overseeing the $950 million East County Advanced Water Purification (AWP) project took the first legal step to condemn a pump station owned by the city of San Diego after numerous delays and now outright refusal by that city to abide by an earlier agreement to sell the property.

The station, at the western edge of Santee and used only a few times a year by San Diego for sewage overflows, was supposed to be sold to the East County joint powers authority (JPA) in advance of the AWP project beginning construction this summer. The deal was on track to be completed last year, but San Diego delayed the final transfer for months, causing the JPA to take initial legal steps to invoke its eminent domain powers to essentially “take” the property.

JPA officials said the city of San Diego was using the pump station to hold the East County water reclamation project hostage, and could significantly increase the nearly $1 billion cost due to contract price guarantees that may expire.

The JPA board voted 3-0 on May 20 to approve a resolution of necessity, the first step in obtaining a property through the eminent domain process.

San Diego said it is willing to transfer the pump station to the JPA, but cannot do so unless the JPA also builds an 8-mile pipeline that would connect to the city’s existing sewer station in Mission Valley. The cost estimate on the line is about $40 million.

Jay Goldstone, San Diego’s chief operating officer, said the current agreement that was approved by the city in 2021 is “unenforceable and illegal” because it violates Prop 218. That law prohibits cities from raising property taxes for projects that do not directly benefit homeowners.

“I know some people are asking how the city could approve an unenforceable and illegal document,” Goldstone told the JPA board. “I can’t tell you how we got there. It was done by the previous administration.”

Goldstone said the city determined if the AWP project was finished before the city’s Pure Water project, residual contaminants produced by the new system could threaten San Diego’s water supply. Pure Water is San Diego’s similar water reclamation program but at a far greater scale than AWP. It is estimated to cost $5 billion.

Goldstone told the board the city was willing to pay $33.6 million for the new pipeline’s cost, while the JPA could pay about $6.1 million, with the remainder paid by other wastewater agencies.

Nicholas Norvell, the JPA’s interim general counsel, said the agency was forced to take legal measures due to San Diego’s continuous delays, and failure to abide by earlier agreements. “Going down this path is not something we wanted,” Norvell said.

Steve Goble, chairman of the JPA, put an optimistic spin on the conflict, saying that the public discussion on the matter was very productive, and could prove even more productive in the coming days. However, he made it clear the agency would proceed with the resolution of  necessity.

Later in the meeting, the JPA board approved a series of contracts, and amended existing design and construction contracts intended to keep the massive infrastructure program on track for its estimated completion by the end of 2025.

Plans for the AWP began about a decade ago and led by Padre Dam Municipal Water District, which considered doing it alone. Yet, as a closer look at the expenses became clear, it enlisted three other agencies as partners: the county of San Diego, the city of El Cajon, and Helix Water District.

The project will take about 15 million average gallons of sewage produced daily by the region now being pumped to the Pt. Loma sewage treatment plant, and transform it through extensive filtration technology into some 11 million gallons of drinkable water.

Similar sewage reclamation projects have been operating in California including Orange County for years. AWP officials assert the project is a no- brainer given the ongoing drought and the ever-escalating costs for importing water from the Colorado River.

The cost to build the system has also escalated dramatically in the past few years. At this week’s Padre Dam Water District meeting, the new estimate was given as $950 million, with nearly $800 million of that sum being supplied by federal and state low interest loans. Officials say that cost will be well worth it and eventually provide significant savings to rate payers over the alternative, which is staying with the status quo.

“Looking at the cost of this project, it is less than the alternative, or ‘do nothing’ approach,” said Kyle Swanson, the incoming general manager for Padre Dam. “If we were not to change anything and continue to import all our water into the Padre Dam district and export our wastewater out to the Metro (San Diego) system, the participation in this project is better financially for our ratepayers.”

Santee is also not the East County!

what does the JPA need the pump station for?