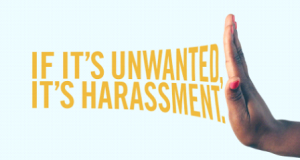 May 24, 2022 (La Mesa) -- A resolution in support of three State legislative bills which address street harassment in public places, transit and private businesses will be considered by the La Mesa Council at its meeting tonight at 6  p.m.  The measure is item 12.1 on the agenda.

Street harassment is unwanted words, gestures, or actions that are forced on a stranger in a public place because of their real or perceived identity, which can include racialized or sexualized slurs. Studies indicate that existing State laws are ill-equipped to prevent and address street harassment, the bills’ authors contend.

According to a 2019 study by the University of California San Diego Center on Gender and Health, 77 percent of women experience sexual harassment in a public space, including 29 percent on mass transit.

Nearly 11,000 Asian American and Pacific Islanders (AAPI) across the country reported hate incidents to Stop AAPI Hate between March 2020 and December 2021, including more than 4,100 reports in California.

Street harassment is not just an AAPI issue.  All women - particularly Black women, indigenous women, and women of color - LGBQ and TGI people, people with disabilities, unhoused people, the young and elderly, and people of color experience street harassment, which carries the threat of and occasionally escalates into violence.

"Nobody should have to face harassment, certainly not in our public places." says Vice Mayor Shu, "We want to send a message to our state representatives that we appreciate their efforts to make our communities safer and want these bills to be passed and signed by the Governor. It is equally important that the small budget requests associated with these bills be included in the next State Budget."

More new laws but no time to fix real problems.