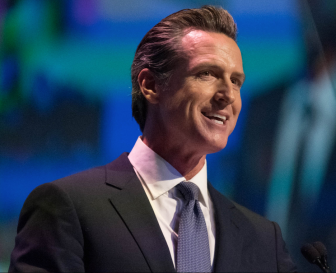 May 15, 2022 (Sacramento) - Citing rising inflation and a large surplus, Gov. Gavin Newsom unveiled a revised state budget of $301 billion on Friday that is $14 billion higher that his initial proposal in January.

Newsom described his “May revise” of the 2022-23 budget as an opportunity to provide relief from rising inflation, ensure public safety, address homelessness, transform public education, and combat climate change.

Over $18 billion of the increased budget would be returned to taxpayers in the form of direct relief payments, including $400 checks to owners of each registered vehicle to offset higher gas prices.
“Backed by a robust surplus and grounded in our unshakable values, we’re paving the California Way forward to prosperity and progress for all,” Newsom said.
“With historic investments, we’re doubling down on our formula for success and making sure no one is left behind — supporting working families and businesses, tackling climate change, expanding health care access, making our communities safer, and more,” he said.
Thanks to general economic growth in California and federal COVID relief funds, the budget includes a surplus of over $97 billion. Newsom said surplus revenue would be used for one-time expenses, adding that the state now has $37 billion saved in reserves.
The budget includes $47 billion to address climate change, including new water supplies, wildfire protection, electric grid reliability and clean energy.
There is $37 billion to rebuild California’s infrastructure, including broadband Internet and new housing, and $128 billion for public education at all levels. Programs to end homelessness are allocated nearly $15 billon.
Spending on public safety would rise by $660 million, with funding for new officers, support for victims of sex trafficking, a crackdown on internet crimes against children, and efforts to address the opioid crisis.
Senate President pro Tem Toni Atkins of San Diego called the revised budget “encouraging” and said she expected further discussions in the Legislature before passage.
“The bottom line is, California will have another responsible, on-time budget that provides immediate and long-term benefits to all Californians, and maintains our state’s overall financial strength in case of potential downturns in the future,” Atkins said.
But Senate Republican Leader Scott Wilk of Santa Clarita said Newsom should have immediately suspended the gas tax because the $400 relief payments won’t go out until the fall.
“The governor is living in an election-year fantasyland if he believes promises of debit cards and rebates in the fall will provide relief now,” he said.

I am a righty. I hate California for many bad and failed Democratic policies. If you lived here in 1964 you would know what I am talking about.

because they would never do something like this. retrumplicans are only about themselves.