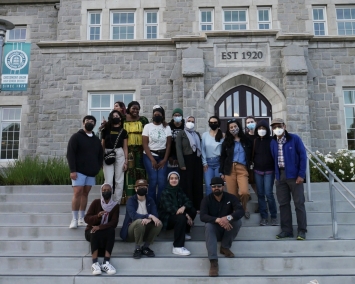 May 24, 2022 (El Cajon) — “I don’t care if y’all heard this a million times but I’m about to make it a million and one: banning abortions only bans safe ones,” proclaimed Huda Ahmed from the steps of the Grossmont Union School District offices during East County Justice Coalition’s (ECJC) reproductive rights rally on May 18.

The rally was the first of its kind in East County since the U.S. Supreme Court draft ruling was leaked two weeks prior, alerting the public of the threat to federally protected abortion access. If the decision authored by Justice Samuel Alito stands as written, it would allow states to outlaw all abortions, even when a mother’s life is in danger or in cases of rape or incest.

“It’s good to have something in East County,” said La Mesa Vice Mayor Jack Shu, who attended and spoke at the rally. “A lot of this stuff is always downtown.”

The evening was hosted by Borderlands for Equity,  a La Mesa-based non-profit which partnered with other groups in the ECJC to hold the rally, including the Racial Justice Coalition of San Diego, East County BIPOC, Borderkindness, the Spring Valley Cleanup Crew and the San Diego Street Medic Collective.

Mejgan Afshan, a founder of Borderlands for Equity, facilitated the event. It featured a cohort of local leaders, organizers, and students — including a 7th-grader named Jasmine Elmezain who kicked off the rally with her poem, “Empower Me for I am a Woman.”

After that, each speaker stressed in turn the importance of an intersectional stance in the reproductive justice conversation. They called for recognition that restricted abortion access unjustly impacts people of color and poor people, and for that to be centered in the movement’s actions.

“Don’t be picky when it comes to human rights,” urged Ahmed, an activist and UCSD student. “Every person capable of pregnancy should be able to execute that right with the only requirement being if it’s at will.”

“We know in East County, with a growing population of refugees and immigrants, we need to have these rights addressed,” explained Afshan, who also seeks to bring more no-cost menstrual products to public facilities in East County.

Pastor Kelly Ryan of the United Church of Christ in La Mesa agreed, speaking to the crowd that included her one-year-old baby and husband. “This isn’t about life, but reasserting supremacies yet again,” she said.

“Our culture has this soft focus, rose-colored glasses sort of thing on motherhood,” she continued. “We can’t guarantee so many of the basic things to help make life possible for families, for people who give birth.”

Kelly cited necessities like leave from work, childcare, and baby formula — of which there is currently a national shortage.

“It’s violent and disproportionately affects the people who already are dealing in systems of scarcity,” concluded Kelly, noting that the United States’ maternal mortality rate is one of the highest in the world and is higher for black mothers than any other group.

“If you’re a multi-millionaire, this is not an issue,” reminded Vice Mayor Shu when he took the steps to speak. “But for those folks who are poor, for people of color, this is an issue. That’s why this is so evil.”

Shu also underscored the importance of activism in reforming political systems. He encouraged thorough voting down the ballot to have the most effective voice in the positions crucial to issues like reproductive rights, such as superior court judges who are elected in San Diego County.

“All politics are local,” he said. “We can make those changes here, and it will have an effect across the state and across the country.”

Over the past month, cities around the United States have organized large rallies decrying the draft Supreme Court opinion, including San Diego, which took part in the national Bans Off Our Bodies campaign. Yet smaller municipalities and rural areas that stitch the country together — such as East County — have just as much stake in the issue, making local organizing a priority for advocates.

“We don’t have a legal backbone in this country anymore to defend our rights to reproductive justice,” said Sarah Farouq, a board member of Borderlands for Equity. “But the hope we have is locally.”

Farouq encouraged the crowd to accept that despite the potential of the court’s stance changing, the protections of landmark reproductive rights cases like Roe v. Wade and Planned Parenthood v. Casey are certainly endangered. Quicker acceptance of this fact, she said, means swifter organizing.

“Roe is falling. We know this,” she said firmly, referencing more of her background with The Feminist Front and the San Diego Center on Policy Initiatives. “We’ve actually seen this coming.”

In addition, lawmakers are expecting certain states like California to become a haven of abortion access, where people from across the country may come to seek out a provider.

In preparation of providing increased care, a slew of state legislation is already in progress that aims to improve access and protect doctors and patients who cross state lines — including San Diego Assemblymember Dr. Akilah Weber’s bill, A.B. 2134.

Her efforts are focused on providing money to clinics that offer care to patients who cannot afford the services, and potentially to grantees who need help with travel and expenses. Chevelle Newell-Tate, District Director for Weber’s 79th district, attended the rally in East County. More information on Dr. Weber’s efforts are available on her website.

In sharp contrast, East County's Republican Congressman Darrell Issa signed an amicus brief urging the Supreme Court to overturn Roe vs. Wade and allow states to ban or restrict abortions. If Republicans regain control of the Senate in the 2022 fall elections, some have pledged to enact legislation to ban abortions in all 50 states.

Closing out the ECJC rally was Setche Kwamu-Nana, a Diversity, Equity, and Inclusion professional and board member of Activist San Diego.

“I used to think America was a very free country,” she said. “Then I realized there is so much infringement on our rights.”

“It’s all about money and power and control, and they want to put it under the umbrella of sanctity of life,” Kwamu-Nana scoffed.

Yet she reiterated that while big demonstrations are important, the work of this movement goes beyond holding rallies. “It really takes the everyday organizing to put in place the changes that will codify our rights,” she said. “It’s a marathon, it’s not a sprint.”

East County, Nearly East County, Some other part of a county to be named later. Is this what is really most important? The article at the top is pretty important IMHO. And the ongoing issue in the comments is a meaningless geographic distinction? My family has been around here since the 1880's and we call it home. You folks have me wondering if I wandered by accident into a real estate brokers meeting by accident. I do not support elective abortion and many folks do. Isn't that the real issue?

Don't you understand that under the Supreme Court's extreme interpretation, any woman in a state that bans abortion can be sentenced to death if she has a high-risk pregnancy.  One in every 50 to 100 pregnancies are ectopic (where the egg implants in the Fallopian tube) and the fetus cannot grow into a baby.  Without abortion, the tube bursts and the woman gets peritonitis (massive infection similary to when an appendix bursts) and is likely to die.  That's just one of MANY life-threatening things that can happen in pregnancy.  Why should your religious views condemn a mother to death?

Then there are young girls and women who have been raped or victimized through incest.  They are victims of CRIMES.  Why should they be punished?  It's DANGEROUS for a very young girl, 11 or 12, to give birth as her body is not fully developed yet.

There are of course many other reasons why women seek abortions. How about when in the middle trimester tests come back and show the baby has no brain stem, or has all the organs on the outside of the body, so it cannot possibly live if born?  Why torment a woman when there is no hope of raising a baby?

I understand how someone may object to abortion when there is a healthy mother and healthy baby. But I would like to see conservatives at least ask their legislators to make sure abortion is kept legal nationwide for the types of cases above, and prevent ANY state from outlawing abortion in those sad circumstances.

but if any of you are registered to vote in east county make sure you vote for anyone but the criminal issa!!! issa wants to take away all our rights!
Again and again you keep posting vile anti conservative rhetoric in a family oriented newsletter. I don't see anything constructive, just attacks.
because your tRumpership will destroy this country. you make my point for me, you hate everyone that does not agree with your retrumplican ideas. you are the one who should be banned

El Cajon is not the East County. Wish the media would figure this out.

and by every other entity I'm aware of.  El Cajon news has always been listed in the Union-Tribune's East County section.  The San Diego Convention and VIsitors Bureau has referred to El Cajon as East County.  The mayor and councilmembers in El Cajon have frequently referred to their city as being in East County.

been east county since 1969

It's 15 miles inland of a county that is 80 miles deep. Not East County.

If it's not part or the East County, what part of the county does El Cajon belong? Not the Coast, not North, not East Lake (South), not College or Mission Valley. It's been in the East for as long as I can remember, so maybe it's time for a new compass?