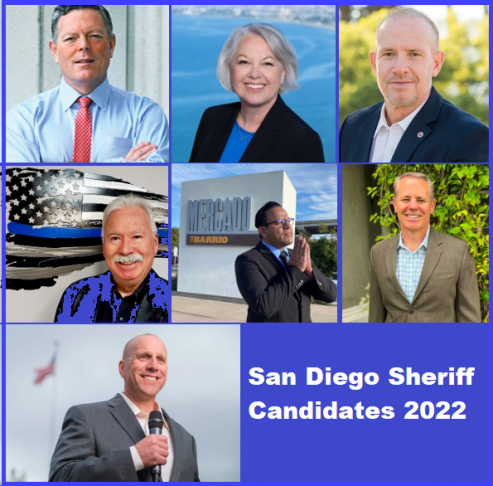 This position — consistently held by Bill Gore over the past decade until his retirement in February — is pivotal in determining the direction of law enforcement across several contracted cities and unincorporated areas, as well as overseeing county jails and courthouses. The San Diego County Sheriff’s department currently operates on a budget of over $1 billion.

The primary election on June 7 will determine the top two vote-getters out of a candidate pool that has grown to include seven individuals. The top two will proceed to the November election.

Below are links to the candidates’ websites and a summary of their key platform points, followed by highlights from a forum held by the League of Women Voters in which four candidates participated.

On April 13, Donna Bartlett-May with the San Diego Chapter of the League of Women Voters held a forum open to all candidates, during which they answered questions submitted by viewers. Myers, Martinez, Gunderson, and Battle participated, although Hemmerling sent in a written platform statement but did not respond to questions.

A selection of key issues and the participating candidates’ respective approaches to them, as stated during the forum, are below. Responses to questions were limited to one minute each. The full video is available on Youtube through the San Diego League of Women Voters.

Full interviews between East County Magazine and three candidates —------- Myers, Martinez, and Hemmerling — are also available. To register to vote for the County Sheriff and more, click here.

Stop voting for the same democrats who have ruined this beautiful state. Fresh blood. New ideas. VOTING ALL REPUBLICANS. WE NEED NEW PEOPLE TO BRING BACK OUR STATE TO ITS ONCE FANTASTIC PLACE TO WORK AND LIVE. IT CANT GET ANY WORSE THEN IT IS AFTER SO MANY YEARS OF THE DEMS RUNNING IT AND MAKING MILLIONS $$$$$$$$$$ Who is with me?
who votes for anyone other than Dave Myers does not want to see the department reformed. vote Dave Myers!!!