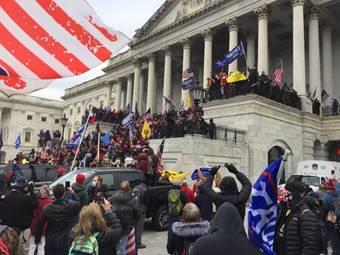 June 16, 2022 (San Diego’s East County) -- My name is Sohel Bahjat, a former Republican and an active voter in East County, San Diego, CA. Please support the efforts to bring Trump and his enablers to trial --  because the Big Lie and the attack on our democracy on January 6 was a real menace and a threat that was going to end in bloodshed and possible chaos.

I'm originally from Iraq and I know how tyrants work, because I have seen and lived through tyranny and the rule of the mob which is still rife in Iraq and the Middle East.

Do we want America to become like most of the Middle East where a leader and his mob can overturn the votes of millions of people? I believe that the answer is no, and that we should put Trump on trial.

I appreciate all comments made here, as I believe freedom of expression is our First Amendment right.  I also believe in following the facts, no matter where they lead us.  According to the facts presented during the Select Committee on the January 6th, attack on the US Capitol, all witnesses who spoke verified facts presented by the committee.  NEARLY ALL WITNESSES WERE REPUBLICANS.  They spoke their truths on the issues presented.  One particularly able witness, retired Judge Luttig, spoke slowly and carefully about what was attempted by the prior occupant of the White House, who tried to overturn the votes of millions of voters via his vice president, that the effort was not legal.  The vice president has no power to do anything but ensure the certified electoral votes from each state are counted.  As a former member of the electoral college for California, I know that to be factual.  All electors sign a document, which is used to certify our state's electoral votes.  The entire complement of electoral college votes, are packed and flown to the US Capitol, where the vice president causes the packages of certified votes to be opened and recorded during a joint session of congress, until all are recorded. The vice president then announces the totals for each contender, and proclaims the victor as the president-elect.

Each party chooses its own electors. His scheme was to try and substitute Biden electors with Trump electors, even though Biden had won those states.  His own Attorney General, Campaign Manager and other advises all told him this was illegal  but Trump was determined to steal the election anyway that he could. That's after bullying state election officials to falsify votes by finding Trump votes that didn't exist failed, and after 62 judges ruled there was no fraud and that Trump lost, including judges appointed by Trump.  In today's testimony we learned he also pressured the Justice Dept and tried to replace people who wouldn't lie, cheat and steal and election on his behalf.  Several Dept. of Justice officials refused to go along with the illegal scheme; the only one who did pled the 5th amendment to avoid self-incrimination and asked Trump for a pardon for his crimes. You are correct that nearly all the witnesses who testified were loyal Republicans, some of whom served in several prior Republican administrations.

I feel compelled to make some comments on Sohel Bahjat's editorial. Am surprised that she being a legal immigrant, active voter and former Republican, would take Democrat talking points. America is a constitutional republic, not a democracy. I have asked hundreds of high school students (individually or in small groups) what kind of gov't we are supposed to have in America - Just 3 said republic, the rest - Democracy or I don't know. They are a product of our public education - exposed in Charlotte Iserbyt's book 'The Deliberate Dumbing Down of America' . (the 3 that said republic were homeschooled). BTW what is the real truth about the 2020 election? I keep seeing and reading about groups that believe that the election was stolen. To prove their accusations are false, why can't audits be done to prove that biden received 81 million votes? What is wrong with wanting to prove that to them? After watching the documentary '2000 Mules', I saw how the election was swayed in those 5 states - AZ, GA, MI, PA, WI. I think everyone should watch it.. No one has yet debunked that movie yet. Now looking forward to watching the documentary 'Selection Code' with Lara Logan in July where the computer programs selected the winners, instead of the voters. Too many irregularities. So lets have a do-over election. Pick a strong uncompromised Republican who will restore America. Everyone needs to acknowledge the truth - The current administration's plan is to fundamentally destroy America. Anyone watching would have to agree. we are in Ukraine to start WWIII, America is now energy dependent, all the mom and pop stores were closed while Walmarts stayed open, 96 food processing plans have been destroyed since 01/11/2021. farmers are kept from growing crops. All this will result in a food shortage soon just like biden predicted. China was allowed to buy up all the available farmland for its own purposes, bidens plan to hand our sovereignty over to WHO, Antiva's planned riots in 400 cities after the Supreme Court decision on Roe vs Wade, etc , etc. . While everyone seems to be glued to the J6 committee hearings, our country is being destroyed. Let's please all unite to focus on the solutions to stop this fundamental destruction. Thanks ! C Lee Sandvick
Thank you Sohel Bahjat for your comments! We have to insist on truth and take responsibility for protecting democracy. Many are disappointed for having been deceived by Trump, but we can come together to ensure that our flag still means something by putting him behind bars.

Or whether any others in his administration or campaign did so.

Republicans who don't like the economy under Biden could nominate another candidate who hasn't fomented a violent insurrection, bullied and threatened election workers, and sought to steal an election that he lost.  They could nominate anyone who wasn't involved in those activities to address the issues that you've raised.

But sadly the party leaders seem afraid to stand up against Trump, who likely has threatened them, too.  If you watch the hearings, many respected Republicans are now saying his actions were illegal.  A prominent conservative judge said his plan to have Pence not certify the election or certify alternate electors not chosen by voters was flatly illegal.  Today election workers in Georgia tearfully testified of being bullied to the point of having the FBI force one of them to move out of her home for several months to save her life -- and these women did nothing wrong.  Trump is on tape bullying Georgia's Secretary of State, a Republican, to try to get him to change votes and declare him the winner with no basis for doing so.  There was an organized plot to substitute fake electors, and that's all in addition to the violence at the Capitol that killed 5 people and injured 140 police officers.  Trump knew he lost.  His Attorney General and Campaign Manager told him so.  All 62 judges that heard his election cases ruled there was no fraud or stolen votes, including judges appointed by Trump.

How can any decent person stand behind someone who has behaved like a mob boss and would do so again, if given the opportunity?  Why aren't good Republicans calling on their party to reject Trump and nominate someone else with integrity?

thank you for the post! however the tRumpers are brainwashed and will NEVER change which is sad. again thank you!