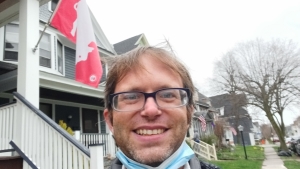 By: Jonathan Goetz
April 28, 2022 (Buffalo, W.N.Y.) - Unlike many mental health issues, Borderline Personality Disorder (BPD) is not treated with medication. The diagnosis was coined concurrently with Dialectic Behavioral Therapy (DBT) by Dr. Marsha Linehan. It is often found in people who have other underlying medical conditions but unlike traditional mental health issues thought to warrant medication, is considered environmentally caused as opposed to irregular brain chemistry. Today it is regarded as being induced by an invalidating childhood.
At first this sounded strange to me; my parents were extremely supportive and I received accolades all the time! But later, I remembered homophobic taunting, just from my mannerisms, before my sexual orientation had even formed. Perhaps that forced me to continually feel the need to prove myself? I'll never forget those, "are you a boy or a girl?" Luckily by now I have a beard and receding hairline so I'm pretty sure I'm a dude.
As a teenager I was grooomed to be a Pastor, and as President of the Bible Club we worked to grow it from just a handful of people to a full house. We rotated speakers, put up butcher rolls with fresh messages nearly every week; once a month the Pastor of the local Calvary Chapel even brought us pizza! I remembered people's names with my night-before "reminder call" list.
But in my sophomore year, after crying myself to sleep for five months, coming into month six of my depression, my God spoke to me. S/he said, "be honest and I'll handle the rest." I remember showing up to our little choir lunch circle, crying.
"What's wrong?" "I'm gay!" "Oh we already knew that!" me wondering: "how was I the last one to find out?"
Gay conversion therapy at the Assemblies of God Church with my anti-United Methodist "United Methodist" Pastor (the denomination was far too affirming), former Club Advisor and someone from the church facility was very strange. I don't remember much, except that it didn't have the intended effect. "I feel this sexual urge with my girlfriend and it seems so wrong!" One of the three's response: "Well with a guy imagine it a hundred times stronger!"
If BPD (Borderline Personality Disorder) is caused by an invalidating childhood, what, then, is the treatment? Dialectic Behavioral Therapy (DBT) is a type of cognitive therapy and was pioneered along with the creation of a diagnosis for people who they thought could benefit from this training in mindfulness. Mindfulness is paying notice to your surroundings and explaining them without "good" "bad" "should" "shouldn't." (presumably so that you can then discriminate but without predjudice)
Homophobia, bullying and pray the gay away can all scar children for life. It can take years of proper therapy to reverse the damage, if the child is lucky enough to survive adolecense. I am glad homophobia in all its dirty forms are frowned upon (if not outright banned) in popular culture. Truth doesn't change; culture does. The arc bends: with age wisdom.
Although I don't understand, beyond anti-bullying, what business schools have telling kids in third grade they can or can't change their gender, I am saddened that Disney's free exercise of speech (Citizens United?) has been met with such a vindictive schorched-earth response from Governor Ron DeSantis and the Florida State Legislature.
Additionally, as someone raised with white guilt, I would also urge everyone to oppose racism in any form, but not by simply not talking about it. The Huti/Tutsi genocide only occured after its discussion had been banned from the public sphere, and thus only learned from one's parents' own frame of reference. Being mean, especially to children, can have devastating consequences.
The opinions in this editorial reflect the views of the author and do not necessarily reflect the views of East County Magazine. To submit an editorial for consideration, contact editor@eastcountymagazine.org.

Not for re-print - exclusive to East County Magazine dot org please link to May 2022 https://www.eastcountymagazine.org/may-2022-articles

Masks: most of us figure if you're medically vulnerable in this Country you had access to a vaccine by now

BPD is a diagnosis built around a behavioral approach to mindfulness instead of a medication, although if often co-occurs, especially from disinvalidating childhoods

I don't understand where my fear of abandonment comes from; that's part of Borderline Personality Disorder but I don't understand where it comes from because I've never been abandoned, but that's part of the diagnosis yet usually I'm the one doing the abandoning. Oh maybe it's all those cheating boyfriends and politicians who chew you up and then spit you out once they get elected.

*"take care of" not "handle" I think that's abbreviated hmm not so sure but that's the only thing i've ever said "God said to me" about. The rest of the time it's my heart and her struggles.

Travel quarantines only 3-7 days; the goal is not to avoid infection, it's to ensure your body temperature is an adequate measure of whether or not you are carrying any common/rare cold and/or influenza. PS planes filter their air like a lot so lemme eat and sip my beverage plz