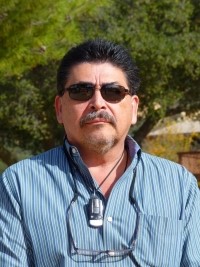 He owned the American Shooting Center, Inc in San Diego’s Kearny Mesa area from 1997 to 2017 and opened American Shooters in El Cajon in November 2021.

He also owned Covert Canyon in Alpine from 2004 to 2019, a paramilitary training facility located within Cleveland National Forest in Japatul Valley that generated controversy and opposition from environmentalists and neighbors due to noise complaints and zoning issues.

The county had issued shut-down orders over alleged violations at times, though Halcon, in an interview and tour of the property with ECM in December 2015, contended these were due to misunderstandings. Halcon lost the property through foreclosure after defaulting on payments in 2017.

During its years of operation, the site provided training for troops readying to deploy to Afghanistan, as well as to private groups and families for shooting sports.

Halcon saw the training activities as a patriotic duty. “Military ranges are overloaded right now. Post-911, demand is up,” Halcon told county planning commissioners at a 2015 hearing. ”We live in a different world now; our law enforcement and first responders have to have training to respond.”

A tribute to Halcon was aired by Gun Owners Radio at https://www.youtube.com/watch?v=56caArDMmnk, where he was described as a “great, great guy” and an institution in San Diego’s gun owners community.

He was a member of Trinity Baptist Church. He is survived by his partner Christine Condit; his mother, Henrietta Ybarra; his sister, Sylvia Carlson (Craig); two brothers, Ernie Halcon, Jr. (Beverly), Michael Halcon (Bonnie), and his nieces and nephews.

Note: ECM learned of Halcon’s passing on June 13, six months after his death.

he was an anti-vaxxer! GET THE VACCINE!!!
His body, his choice