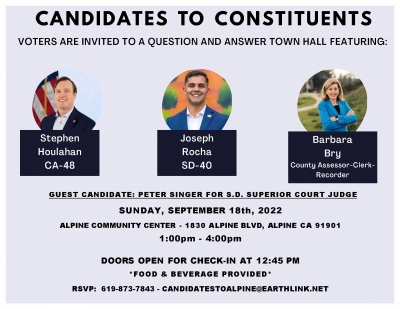 Below is information on the candidates featured, provided by Tillmond: 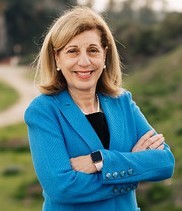 Barbara Bry is running for the non-partisan position of San Diego County Assessor-Clerk-Recorder. Her opponent is Jordan Marks. Bry was born in 1949 in Philadelphia, Pennsylvania. She graduated from the University of Pennsylvania with a bachelor's degree and master's degree in 1971. She went on to obtain another master's degree from Harvard Business School in 1976. Bry's professional experience includes serving as San Diego City Council President Pro Tem where she served as the Chair of the Budget and Government Efficiency Committee and as Vice Chair of the Rules Committee and the Committee on Public Safety and Livable Neighborhoods.

She also has worked as a journalist, COO of Blackbird Ventures, CEO/Editor in Chief of Voice of San Diego, Chief Marketing Officer of TEC International (Vistage), and Co-founder of ATCOM/INFO.  As the first elected official to call for an independent investigation of both the 101 Ash Street scandal and the Public Utilities Department’s water bill overcharging fiasco, she has a proven record of asking the tough questions to identify government waste and to ensure taxpayer dollars are well spent. 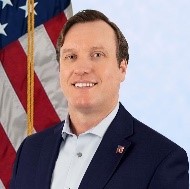 Houlahan earned a bachelor's degree from San Diego State University in 1998 and a graduate degree from the University of San Diego in 2003 and went on to become a nurse. Raised in Santee by a hardworking single mom, he knows what families in California are going through.

He served on the Santee City council as a member and Vice Mayor and worked across the aisle to protect the community from a massive power plant and pipeline, led Santee’s $10,000,000 Mast Park redevelopment project, successfully passed term limits, and headed the contract negotiations for the Santee Firefighter Paramedics.

“Running for Congress is about bringing common sense problem solving back to Washington, not about politicians enriching themselves financially at the cost of our democracy”, states Houlahan, “I have deep roots with the people and the land of California’s 48th congressional district; I will represent all of my constituents to ensure their financial prosperity and personal wellbeing. We are not two political tribes; we are all Americans!” 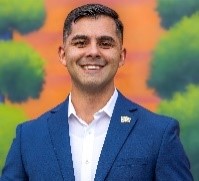 Born in Southern California and raised by his single dad, along with Rocha’s four siblings, he excelled in school, participated in the Chicano Latino Youth Leadership Conference, and worked part-time as a dishwasher. He joined the Navy on his eighteenth birthday, quickly advancing to become a bomb dog handler, tracking down explosives in the Persian Gulf.  He later earned a degree in Law from San Francisco School of Law and went on to become a Marine Corps Captain and prosecutor.

“I’m running for State Senate out of the same sense of duty and service to our country that has guided me my entire life. As a Navy and Marine Corps veteran, I will fight for common sense solutions to ensure that every San Diego family can get ahead, make their rent, access quality healthcare, and live out their American dream,” Rocha states. 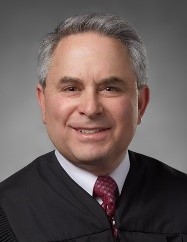 Peter Singer is running for the non-partisan position of San Diego Superior Court Judge (seat 36). His opponent is Pete Murray.

Commissioner Singer is a longtime resident of Scripps Ranch where he and his wife, Belinda, raised their two (now adult) daughters.

He was hired following a vote of San Diego Superior Court judges and serves as a Commissioner of the San Diego Superior Court.  By appointment of the Chief Justice of California, Singer serves on the Judicial Council’s Traffic Advisory Committee. He’s been honored as California’s Court Commissioner of the Year and he currently holds the position of president of the California Court Commissioners Association.  Before coming to the bench full-time, Commissioner Singer operated his own law firm for 28 years. His practice primarily involved civil law cases, He had served the Superior Court (and the former Municipal Court) as a temporary judge for 22 years.

Commissioner Singer was recruited by the California Judicial Education and Research (CJER) division of the Judicial Council to serve as an instructor for new judges and commissioners.  Singer is extensively engaged in community & volunteer service, having started as a volunteer firefighter many years ago.  He is a 33-year member of the Downtown San Diego Lions Club, where, in the Club’s 100-year history, Singer is the only person to have twice served as president.  Because of the extreme need for affordable housing in the region, Singer has recently spearheaded the refinancing of the existing project for the purpose of unencumbering $25MM+ in order to replicate LCSC’s outstanding housing endeavors.

The Town Hall format offers an opportunity for constituents to ask questions about issues that matter most to them.

If you're planning on attending the “Candidates to Constituents” Town Hall in Alpine, please RSVP to:

but the tRumped backed candidates.