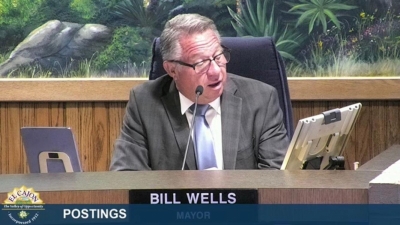 August 12, 2022 (El Cajon) -- A new increased sales tax initiative was proposed during Tuesday night’s El Cajon city council meeting. If approved by voters on November 8, this measure would repeal proposition J, the half-cent sales tax enacted in 2008 to fund basic services, and replace it with a new one percent tax, or one cent per dollar.

Mayor Wells stated during the Council’s deliberations, “Throughout most of my political career I’ve been against every tax increase I’ve seen. I’ve never voted to raise taxes.” But ultimately, he decided to issue a  yes vote. “No matter what happens we are going to get a political beating in the next 6 to 8 weeks. But ultimately our highest priority is to protect people.”

The new one-cent sale tax would remain locally controlled and generate about $24,000,000 annually according to the city. This new tax, if approved by voters, would augment funds for programs sought by residents, such as homeless intervention, removal of homeless encampments, hiring more police officials, fire and emergency services, and infrastructure for the city.

El Cajon’s current funding isn’t enough to maintain and expand upon various services, the city contends. The demand for better public services in the city of El Cajon is also disproportionate to its size. The city experiences a greater number of fire department calls per capita than surrounding cities. It also receives a higher number of crime reports per capita. 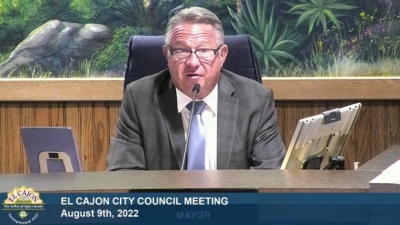 An extension of Measure J would “maintain the status quo” according to the agenda item wording, and would not allow the city to expand on its needed services, so the city seeks to repeal and replace Measure J.

It currently generates about $12.5 million in yearly revenue. According to recent polls, El Cajon residents are interested in reducing the visibility of homelessness in the city while increasing public safety programs. Citizens polled have expressed that they would like an expansion of Measure J to include one cent per dollar spent to aid the demands of city services.

Probolsky Research conducted the polls. 400 El Cajon voters were surveyed. Party preference among those surveyed were 33.4% democrat, 34.1% Republican, and  30.3% non-partisan. 81% of participants stated that reducing homelessness is their top priorities as voters. Graham Mitchell, the city  manager, stated that he was shocked by the results of the polls.

During the polling process the question ‘Under what conditions would you not support the new tax?’ was asked to see if city staff could collect information on possible opposing views from the public. They found that participants would not want to pay the tax if there was not any oversight according to Vince DiMaggio.

Graham said some of the comments received during the process included, “I already pay too much in taxes,” “the city doesn’t know what they are doing.”  Even though those  perspectives were expressed by those participating in the poll, they were found to be the minority according to the city manager.

The City of El Cajon spent $2.9 million on homeless services over the past two years. If the one-cent sales tax initiative passes and prop J is repealed homeless programs will be a main priority and will receive additional funding, according to the city.

According to the polls, homelessness is an issue the residents of El Cajon have been focusing on. The one-cent sales tax that is to replace Measure J would also aid in the removal of illegal sidewalk camping and will expand upon clean-up efforts of public areas.

There is a provision that will be added to the ballot which would include a Citizens Oversight Committee, a five-member committee with a mission to ensure that the funds accrued by the new measure is spent in such a way that it meets the communities’ needs. It is recommended that this committee include a member of East San Diego’s County Chamber of Commerce, a local business owner and someone from the San Diego’s Taxpayer Association.

If this new measure is successful, the City Council might be able to suspend El Cajon’s sales tax in the future if revenues far exceed projections and the need for the additional revenue generated by the tax is no longer critical to fund City services. This action, if eligible, would be reviewed by the Citizens Oversight Committee.

Property taxes have been a major key factor in El Cajon’s inability to receive funds for basic services. In San Diego County, more affluent cities such as Encinitas and Carlsbad have a higher property tax compared to El Cajon. Encinitas is at a rate of 23% and El Cajon is 11%, including both state and local taxes combined. If the city of El Cajon were to retain the same rate of tax as a city like Encinitas the city would have about $12.5 million a year.

Not everyone is on board with the proposed tax hike.

In an email to ECM,  El Cajon resident Robert Gehr objected to the Council asking for "more money for the same type of services touted before" under Prop J. 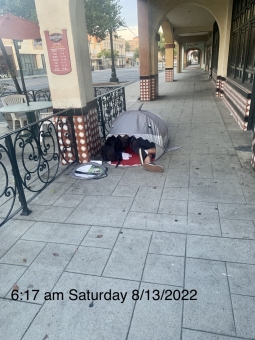 He questioned the need for the tax hike, noting, "Let us not forget they all just recently voted to give themselves a 10% raise in salary. And last I read about the city of El Cajon, was it was in very good financial shape, so what happened?"

Gehr agrees that homelessness is a problem, and sent several photos (left and right) taken this morning in downtown El Cajon to demonstrate the point. He agrees that there are sanitiation and safety issues.

But he questioned the mayor's statement indicating tax funds would be used to clear homeless camps. "The police don’t actually remove many homeless people from 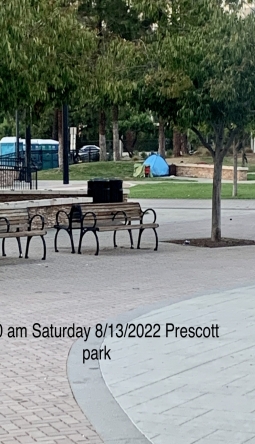 public places as it is, because they’re protected," referring to a court ruling prohibiting cities from clearing homeless camps unless shelter beds are available and offered," he said.

He noted that the city recently hired 10 more police officers using reserve funds, and questioned if more officers are truly needed. "I think this could be another case of smoke and mirrors that politicians seem to enjoy," Gehr said.

The term of this new measure, if passed, is to be in place until repealed by voters.

the city manager, stated that he was shocked by the results of the polls. that is because like most bureaucrats he is out of touch of what people want.