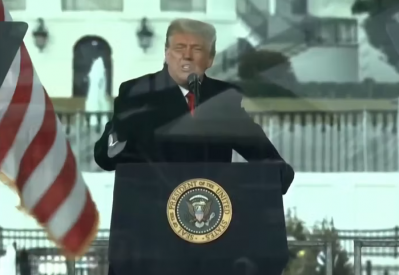 "Trump did what he did—and refused for hours to stop the violence—because it was part of a determined, months-long plan to carry out a coup. This was a crime."

Sarah Matthews, former deputy press secretary, said Trump was treating the January 6 assault like a "celebratory event" and telling the insurrectionists that "what they were doing at the steps of the Capitol and entering the Capitol was okay, that they were justified in their anger."

Matthews was referring to Trump's tweet attacking then-Vice President Mike Pence for lacking the "courage" to help overturn the 2020 election as rioters entered the Capitol in an effort to block certification of President Joe Biden's victory.
Former deputy national security adviser Matt Pottinger, who resigned along with Matthews on January 6, told the House panel that Trump opted to pour "gasoline on the fire" by tweeting about Pence, further emboldening a mob that wanted to "hang" the former vice president.
Instead of trying to call off the violence, Trump sat for hours in front of the television, witnessing the Capitol attack unfold and resisting pressure to condemn the armed mob that he had ginned up with incessant lies about mass election fraud—falsehoods that many Republican lawmakers, including Sen. Josh Hawley (Mo.), echoed.
The committee displayed security footage of Hawley fleeing after the mob breached the Capitol:

Meanwhile, "President Trump sat in his dining room and watched the attack on television while his senior-most staff, closest advisers, and family members begged him to do what is expected of any American president," said Rep. Elaine Luria (D-Va.), who led Thursday's hearing alongside Rep. Adam Kinzinger (R-Ill.).

Eventually Trump issued a video statement telling the attackers to "go home," but he closed his remarks by calling the rioters "very special." He also repeated his lie that the 2020 election was "fraudulent" and "stolen."
"We love you," Trump told the insurrectionists.
Thursday capped off a series that paired new revelations and hours of witness testimony with already-known facts to produce what legal experts and watchdog groups have described as an overwhelming case for prosecuting the former president for leading a criminal attempt to thwart the democratic process by force, increasing pressure on the Biden Justice Department to act.
"Over eight hearings, the January 6th Committee has provided undeniable proof that former President Trump and his allies planned, promoted, and paid for a criminal conspiracy to overturn the will of voters," said Sean Eldridge, founder and president of Stand Up America. "Tonight, we heard how members of the Secret Service were saying goodbye to their families as Trump egged on the violent, armed mob on January 6th. That should be chilling to every American."
"The threat to our democracy is not in the rearview mirror," Eldridge added. "More than 100 election-denying candidates are seeking office this year, including key election administration roles from county clerk to secretary of state. It's clear from the committee's work that Trump and his allies will go to illegal and violent lengths to seek power. They must be held accountable in the court of law—and we must hold them accountable at the ballot box."
Following Thursday's proceedings, the Not Above the Law Coalition projected the word "Prosecute" onto a building next to Trump Tower in New York City, underscoring its demand that Attorney General Merrick Garland bring criminal charges against the former president and likely 2024 contender.
"Trump did what he did—and refused for hours to stop the violence—because it was part of a determined, months-long plan to carry out a coup," said Robert Weissman, president of Public Citizen, a member of the Not Above the Law Coalition.
"This was a crime against America," Weissman added. "It must be prosecuted."
The House panel announced Thursday that it will be holding more hearings in September as it continues its investigation into the origins of the January 6, 2021 attack and the president's role in sparking the violence.

The comments from residents is In regards to your article. We don’t need your personal input too. You are hell bent on proving Trump is a bad person. STOP PUTTING IN YOUR OWN 2 CENTS. You already did that with your far left article. Don’t try to defend the article. We who disagree with your article (and view) are doing what should be done. You don’t have to like it, but we have the right to post OUR TRUTH.
theflowerfroglady have drank the tRump cool-aid. you are a brain washed sad individual and are beyond help.

You fail to cite a single fact to justify your position, unlike the articles which are very well sourced, researched and documented.  It's not "far left" or "far right" to report facts.

This is not about liking or disliking any politician.  You forget that we've reported with equal accuracy and fairness when Democrats have engaged in serious misconduct, such as former Mayor Bob Filner and former El Cajon Councilman Ben Kalasho. We won major journalism awards for our reporting on misconduct by the latter.

Blindly supporting anyone in any party despite a growing mountain of evidence documenting wrongdoing is what's indefensible.

All Democrat's BS. When are thay going to investigate all the riots of 2020?

Our photographers were physically assaulted, threatened and harassed by both protesters and counterprotetesr, as well as pepper-sprayed by police. We reported acts of wrongdoing on all sides. It was wrong for people to burn down banks in La Mesa and we published actual video showing arsonists in action. It was also wrong for white supremacists in Santee to beat up on kids peacefully protesting, and we published video of burly men throwing rocks at and punching skinny young unarmed kids.

Violence by either side is wrong, no matter the grievance one is protesting.

We also ran reports on accountability - who was arrested, sentenced, convicted, what changes police and the city made, lawsuits stemming from the local 2020 riots and so forth.

you are a tRumper

This is not "all Democrats" and it is not BS.  Nearly all the testimony, particularly the most damming statements, came from Republicans in Trump's own administration and in his campaign.

The committee has 2 Republicans on it, Liz Cheney and Adam Kinzinger.

The Democrats first requested an independent nonpartisan investigation and Republicans blocked that because party leaders didn't want Trump or others investigated for the violent and letahl attack on Jan. 6, 2020. So The Dems did the only thing they could, start a Congressional committee investigation.

GOP Senate leader Mitch McConnell then tried to appoint as members people who were accused of being part of the insurrection and potentially facing charges themselves.  Do you really think potential criminals should sit on the jury investigating themselves?  Of course not.  So  Dems took the two  Republicans who did step forward.

The evidence is very clear now that Trump knowingly sent an armed mob to attack the capitol and did nothng to stop it, gloating as he watched on TV. He never called in the National Guard, or talked to the Secretary of Defense, or anyone else.  This is after his own Attorney General and White House Counsel (attorney) told him there was no evidence of fraud, that he lost, and should concede and after over 60 judges found no fraud either.  A handful of Trump insiders pushed for actions that that AG and White House Council believe were illegal, such as a scheme to seize voting machines .  Trump bullied and pressured state election official to illegally alter outcomes and illegally pressured VP Pence to commit an illegal action as well, then stated perhaps Pence deserved to be hanged after Pence refused to cooperate.  Over 150 police officers were injured and some died due to Trump's actions.  On what basis do you claim this is BS and partisan-- fairy dust? Maybe watch the hearings, read the documents,  and stop listening to  propaganda outlets that ignore clear evidence.

tRump is like teflon same as issa. the right will vote them back in and the country will join puttin.