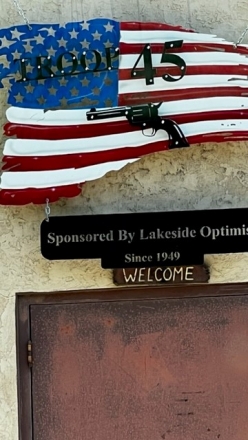 September 7, 2022 (Lakeside) – A Lakeside resident was startled to see the number 45 and a gun image with flag on a sign outside a Boy Scout meeting house on public property at Lindo Lake County Park.

“It looks like a Trump flag on the back of a pickup truck that’s been tattered,” said the resident, a gun owner who voiced concern that the imagery made a political statement (Trump was the 45th President) and could be construed as promoting violence.

ECM sent the resident’s concerns and photos yesterday to Gig Conaughton, public information officer for the County of San Diego regarding the sign on a building shared by a Lakeside Boy Scout Troop and an Optimists Club. From a distance, the word “troop” is difficult to discern, but the number 45 and the gun are large and clearly visible.

Our email asked if the County believed the sign was appropriate on public land, or should it be removed or modified?

Today, Conaughton sent the following response.  “Just wanted to let you know that our Park staff have been in contact with the scouts. Here's their full message: 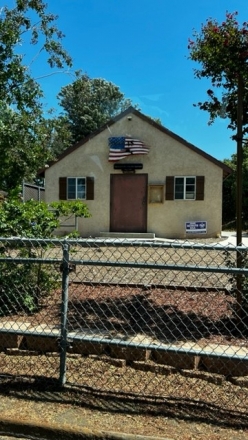 Park staff have been in contact with Boy Scouts to remove the gun from their graphic, and while the number 45 may seem like a political reference, it's actually the official number of the Boy Scouts troop that uses that facility.

Whatever you're looking for, you'll find it. Want to be 'concerned' (or even offended?) by a public display of '45'? It MUST be a Trump dog whistle, right? Got a great laugh for it simply being Troop 45. [And still waiting for the County to explain why they played 'Welcome to the Jungle' for Nathan Fletcher's 'State of the County' address at the Educational Cultural Complex (ECC) back in March: https://youtu.be/zx-uQivaftc?t=608 ]