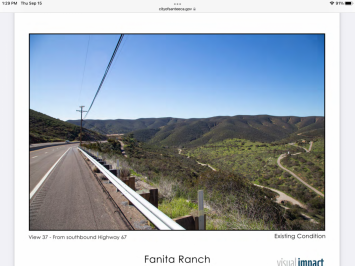 September 15, 2022 (Santee) -- Fanita Ranch, the 3,000-unit residential development that has gone through multiple iterations and designs since the city was founded, was approved once again by the Santee City Council after a four and a half-hour meeting Sept. 14.

This approval, on a 4-0 vote with Councilman Rob McNelis recused due to his property benefiting from the project, comes on the heels of the Council’s 2020 approval of the same project. That was followed by a lawsuit from environmental groups, a referendum that put the issue on this November’s ballot, and a court-order rescinding the 2020 approvals due to wildfire evacuation concerns. The Council used the court’s decision to negate its earlier approval and remove the initiative from the upcoming ballot.

Because Fanita Ranch complied with Santee’s Essential Housing Program, a law the city adopted in August 2021, city officials said last night that approval of the new plan presented last night did not entail amending the city’s General Plan, and hence, there is no requirement to hold a public vote.

“They followed the law, and we followed the law and now we have a project,” said Mayor John Minto, who predicted last night’s vote would likely be challenged again by a lawsuit.

“I just hope it goes before the same judge because we’ve done everything that’s been asked of us,” he said.

Opponents charge that the approval of Fanita Ranch, which will add about 8,000 new residents to the city, should trigger an automatic ballot measure because of the passage of Measure N in 2020 that requires a vote for any project that involves amending the General Plan. 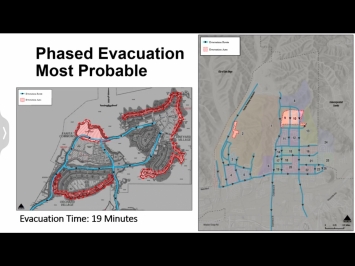 Among the key changes now included in the project are more explicit directives and modeling outcomes in the event of a major wildfire, including an extended Magnolia Avenue as an evacuation route, and probable phased evacuations to prevent traffic gridlock.

Fanita Ranch project opponents, led by Preserve Wild Santee, a local environmental activist group, said no matter what consultants come up with, the threat of a major wildfire in the area is too great to risk lives.

“It’s not just about tax dollars; it’s about everybody’s safety,” said Lee Shannon, a Santee resident of about 20 years. “No disaster comes with a model. They all come with a mind of their own….Can you really guarantee that people’s lives will not be put in jeopardy? I don’t care what you build, it’ll burn.”

The revised environmental impact report (EIR) shows different evacuation scenarios that range from 19 minutes to nearly two hours, but these all  push the traffic onto Mission Gorge Road. Testimony from both the city’s top fire and Sheriff’s officials assured the council that evacuation plans, albeit fluid depending on the fire, would keep the city’s population safe.

Minto questioned consultants about whether the evacuation models now included in the revised EIR would hold up to court challenges, but the hired consultant said the technology used in the models was too new to say if that was true.

Fanita Ranch proponents, who clearly outnumbered opponents in the packed Council chambers, said the need for all types of new housing has reached crisis proportions.

“The population is here, the traffic is here, people are flocking to San Diego. We need housing,” said Mia Bianchi, who said she was told if she couldn’t afford current home prices here, then move.

“Why should moving out of San Diego and California be our only option?” she asked.

Nicole Wineman, a business owner in Santee with 90 employees, said unless the city increases its stock of affordable housing, she’ll be forced to relocate the business where such housing exists. 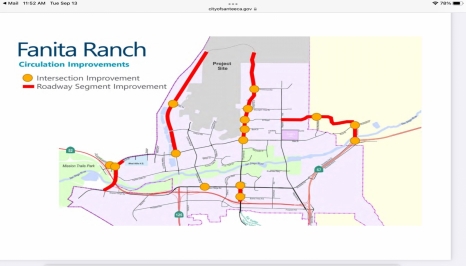 The project’s developer, HomeFed Corp., now a subsidiary of Jefferies Financial Group, a New York financial conglomerate, reiterated its commitment to making major improvements to State Route 52 and local roads to the tune of $80 million and completing those projects before the first owners move into Fanita Ranch. Those improvements include expanding SR 52 by one lane in each direction, as well as revamping the west bound on-ramp at Mast Boulevard.

The planned development includes both a new fire station and school, although the latter is not set in stone. With the school, the project will have 2,949 units; without it, it’s going to be 3,008 units.

Fanita Ranch, if built as planned, will feature a working farm and vineyard, about 80,000 square feet of commercial space, parks and open space. Of the total 2,600 acres, about 1,650 acres or 63 percent is designated as habitat preserve. In 2018, the company pegged the price range for the houses from about $400,000 for attached units to above $1 million for large homes on larger lots. Those ranges have obviously gone up.

Councilwoman Laura Koval said she’s looked at the Fanita Ranch project in great depth and pushed back on developers to make changes to make it better, which resulted in her support. “This ain’t your daddy’s Fanita Ranch,” she said. Koval also lashed out at many emailers who said she and other councilmembers “were in the pocket of developers.”

“I’m in the pocket of your children and grandchildren--and I care more about them than your opinion of me so I’m voting yes for them,” she stated.

Councilman Ronn Hall said Santee and all cities in the state are being pressured to increase the construction of new housing, with every city being assigned specific target numbers to hit by a certain deadline or face state intervention to make those targets.

“If we don’t do something, the state is going to do it for us,” Hall said. If the city doesn’t approve the current plan, the state could step in and mandate a far denser, and less attractive plan that wouldn’t include any traffic improvements, he said.

Mary Chaparro, a local realtor, said Fanita Ranch is the answer to what is clearly a major shortage in the housing market. “It’s time for us to start looking at solutions as opposed to having the fear factor of Nimby-ism,” she concluded. “Help us house our residents in this community in a safe way.”

that Fanita Ranch gets built. but you can bet collinsworth (who by the way gets most of his funding from out of states interests) will be doing his best to lie to people to get a ballot measure. and he will file tons of useless lawsuits to try and stop this much needed move up housing project. which most people want as was proven by the speakers in support of this project!