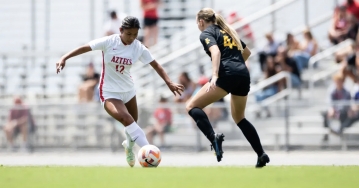 SDSU (2-3-4, 0-1-0 MW) opened on the front foot, firing off three of the first four shots of the match. Carlin Blake forced the first save of the match in the 14th minute when her shot from outside the box was saved by the Rams keeper to keep the score level. However, it was Colorado State (4-3-1. 1-0-0 MW) who opened the scoring in the 21st minute off an Alexa Madueno own goal to take an early 1-0 lead. Kaitlyn Abrams darted into the SDSU penalty box, fired a shot that bounced off multiple Aztec defenders, and ended up in the back of the net off of Madueno.

Colorado State would add to their lead in the 30th minute when Liv Layton gave the Rams a 2-0 advantage. After dribbling to the edge of the 18-yard box, Layton fired off a right-footed shot that was initially blocked by the Aztec defense, but the ball fell right back to her, and she shot the ball into the back of the net for her third goal of the season.

San Diego State would try to find a way back into the match in the second half, in which they outshot Colorado State 9-2, but could not find an opening goal. Rachelle Elve, Emma Gaines-Ramos, Denise Castro and Olivia Sekimoto all had shots saved or blocked in the second half. Additionally, in goal for the Aztecs Madueno had three saves on the night.

Up Next: San Diego State will play Wyoming on Sunday on the SportsDeck at noon.  ECM Sports may have coverage of Sunday's game.  Follow @ECMagSports on Twitter.