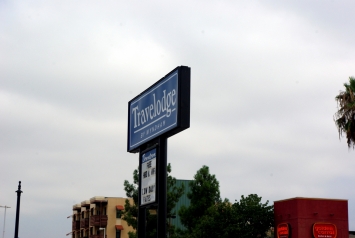 September 23, 2022 (El Cajon) Some people placed in El Cajon motels under the County of San Diego’s motel voucher program for the homeless had extensive criminal histories or were fugitives with arrest warrants, according to a statement issued by El Cajon Police Department. ECPD made the discovery after reviewing arrest records tied to the program.

“The number of criminal drug dealers and fugitives using the County’s motel voucher program is disturbing,” Police Chief Mike Moulton said. “Community safety is my primary concern and the El Cajon Police Department is more than willing to assist the County with better ways of vetting those utilizing their program, if that’s what’s needed.”

In June, Eugene Brown, 59, and Catherine Sweetser, 53, were arrested at one of the motels in the voucher program in El Cajon. ECPD officers searched the room and found methamphetamine, fentanyl, heroin, drug scales, and drug packaging materials. At the time of their arrests, Brown had a felony arrest warrant for drug sales and Sweetser had a felony arrest warrant for child endangerment and felony DUI, ECPD reports.

Louis Bono , 54, was arrested at another motel using a County voucher. Bono’s room contained a large amount of methamphetamine, drug scales, and drug packaging materials. He was arrested for possession of drugs for sale, and at the time of his arrest, Bono was on bail for a drug sales arrest a month prior. Bono has an extensive drug-related arrest record dating back to 2015. A few weeks later, Bono was again arrested for possession of dangerous drugs using the County’s motel voucher program at yet another motel in El Cajon. Last month, Bono was arrested a third time for narcotic sales, still using the program which brought him back to El Cajon.

Last month, Efren Sartuche, 35, was found and arrested as a fugitive and had a felony warrant for firearms-related offenses.  He was also staying in El Cajon using County motel vouchers.

ECM asked the County to respond to questions regarding the program. Michael Workman, Director of the County Communications Office, sent a reply via email.

Asked if the county may need an alternate way to deal with people who posed risks to the community based on a history of repeat offenses, such as a program that requires participants to be drug-free, Workman confirmed that people released from jail or prison are eligible to participate in the motel voucher program.

“This program is low barrier, which means only registered sex offenders are not allowed in,” though he stated that participants must follow rules or face removal from the program.

Those rules state in part:

Workman added that “people have been removed from the program.  The people named (in El Cajon’s press release) may in fact be leaving the program or already have. They are given rules they must follow upon entry.”

El Cajon City Manager Graham Mitchell told ECM that the city has gotten 800 homeless people into permanent housing since 2020, doing more than most other cities in the region. El Cajon has its own voucher program, but it includes supervision and security to protect the public as well as to protect homeless people from drug dealers, predators and traffickers, Mitchell said.

El Cajon’s Mayor Bill Wells contends that his city is being burned with more than its fair share of homeless people compared to other cities or the unincorporated areas.  Asked how many of those placed in motels in the city of El Cajon through the voucher program, Workman said, “63% are from the city of El Cajon and 95% are from unincorporated  East County.” That conflicts with the County’s own press release earlier, however, which stated that the 63% from El Cajon include both incorporated and unincorporated areas, so it remains unclear how many are from within the city limits. ECM has asked Workman to clarify this discrepancy, but so far, he has not responded.

Mitchell has sent his own records request to the County seeking more information. Below are his questions:

1) May I see the data sources (redacted of personal information) for a six-month period of those that were served by Equus and placed in El Cajon motels?  Specifically, I am interested in when they arrived, how long they have stayed, where they most recently experienced homelessness and for how long, and where they last had permanent housing.  These are data points that we have our homeless contractor collect for reporting purposes so we can assess the effectiveness of our programs.  I am hoping Equus captures similar data.

2) What are the variety of funding sources being used by the County to fund the motel voucher program administered through Equus?  I know that you fund other programs, but I am primarily interested in this contract since Equus makes ups the majority of County vouchers being used in El Cajon.

3) Assuming the figures are accurate in the press release released by Nathan Fletcher and Joel Anderson (by the way, which I find odd and highly political), there are 85 individuals using motel vouchers in El Cajon that are from outside the City.  Based on the last point-in-time count, El Cajon has the highest homeless population per capita AND the most shelter spaces in the County.  Also, El Cajon has some of the highest pockets of poverty and highest concentrations of immigrants in the County.  Given these socio-economic disadvantages in El Cajon, please explain the rationale or the equity of placing more homeless in a city already with high concentrations of homeless?  One could surmise why, but I would greatly appreciate an explanation from the County.

4) I am looking more into the details, but the El Cajon Police Department recently arrested a voucher participant who was dealing drugs.  The individual was booked, but because of Sheriff’s Department policy, the individual was not held in custody.  Our officers encountered him several days later at a different El Cajon motel using motel vouchers. Equus would not know that he was arrested.  However, if the City know of someone like this, would the voucher for this individual be revoked or would he be allowed to continue in the program?

from the article. . .Workman said (employing silly math): “63% are from the city of El Cajon and 95% are from unincorporated East County. . . .Well, the vast majority of San Diego County is " unincorporated" which means that these citizens have no localized government. Got a problem? Forget it, there's nobody for you.
The ECPD started to push our homeless citizens to the outskirts of El Cajon, which is how the homeless camp on Magnolia started. Then when the city got complaints they could say it was the County's problem. So the County came in and gave out vouchers to get them off the streets. From what I have found out, no new homeless are on our streets at least not how the mayor is making it out to be. They were already here! The city is mad the County didn't clean up their mess. As far as the city manager saying we have gotten 800 people off the streets and in to housing since 2020 is untrue. The We All Count in 2021 found about 700 to 800 homeless in our city, if what he said was true we wouldn't be having this problem.