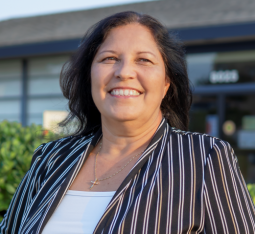 September 20, 2022 (Lemon Grove) — “The greatest endorsement that I have and am most proud of is [from] the residents themselves,” said Blanca Lopez Brown, a 15-year member of the Lemon Grove School District Board of Trustees. “It helps to keep me grounded and centered as to why I took this on to begin with.”

Brown is one of five candidates vying for seats on the Lemon Grove City Council this election year. She officially qualified for the ballot last month; other endorsers include the Lincoln Club of San Diego. “I am grateful,” she said of the conservative business group’s endorsement. “However, I am here to serve the community of small businesses, residents, and families of Lemon Grove.”

Given the four-year term lengths for councilmembers in Lemon Grove, Jennifer Mendoza is the only current official whose seat could be challenged this year. However, Councilmember Jerry Jones has also decided to retire after nearly 20 years as a councilmember, creating an open seat and the possibility for two new faces to join the dais.

For elections within San Diego County this year, every active registered voter will automatically be granted a mail ballot. They will begin being sent out on October 8, and early voting via ballot drop boxes will begin October 10. All in-person poll centers will be open from November 5 through Election Day on November 8.

In the Lemon Grove field, Councilmember Mendoza has announced her bid for reelection and is the only incumbent in the race. The other candidates include Brown, as well as Jessyka Heredia, Stephanie Klein, and Alysson Snow.

East County Magazine sat down with all five women for in-depth interviews in order to learn more about them and their campaigns Watch for spotlights on each of the candidates in our Lemon Grove communities section.

In her conversation with ECM, Brown made clear that running for local office is the peak of her political aspirations — nothing further. Giving her time and talents toward efforts that serve her own community is more important than seeking a high office. Through decades of volunteering in Lemon Grove, she has been involved in various public improvement projects including the public library, the track at Berry Street Park, the Lemon Grove Farmers Market, and after school programs.

Brown is confident that her years of experience serving Lemon Grove schools, as a business owner, and as a volunteer have prepared her well for a role on the city council. She is no stranger to improving infrastructure, developing financial partnerships, or working for high ratings.

One of her highlights over the years was helping to pass a bond for the library with 76% public approval. The money helped expand the reach of the resource from just the middle school to the community at large.

“That is outstanding,” she reflected. “It just meant that the community was in agreement, and I think that’s how things should move forward when you’re going to make such a change.”

She also takes great pride in her work from years ago on the County’s Preschool For All (PFA) Task Force. In that role, she helped coordinate with the State of California and was able to secure the necessary funding for a program that resulted in preschools opening across every elementary school in Lemon Grove for the first time.

“We can change things and make them not sustainable, but the normal practice,” she said while describing her PFA experience.

Looking ahead to potentially serving at the city level, Brown sees a clear starting point to prioritize.

“It’s clear that the budget in Lemon Grove is suffering. If we look out into our greater community it’s evident. I can have all these wonderful ideas,” she said, explaining her goals to direct funding towards services like infrastructure repair, police and fire. “But if we just don’t have the budget, it’s really not realistic.”

She hopes to take a deep look at the budget to gain an understanding of the City’s past and present. Then, she would focus on a resource strategy for the future that reaches a sustainable place, with an emphasis on finding additional money for projects, and building the relationships that matter most for long term investment.

Read on for more highlights from our conversation with Blanca Lopez Brown.

Why are you running for elected office? What drew you into this race?

It was time. I have served as a trustee of Lemon Grove’s school district for 15 years. I certainly learned quite a bit. Serving at the most local level prepared me to get to know the community, especially in Lemon Grove because the school’s are the central hub for the community. It gave me a really good feel for who we are as a community, what some of the desires are, but then also some of the challenges in our community. There’s nothing more I could have done at the school board level. So it was time to bring it into the city.

How might you approach a new sales tax initiative to bring more funding to the City?

For me, it would be designed very different from the get-go. Lots and lots of stakeholder input. We just failed terribly on the last one. I could see some of the areas where it was going to be difficult to pass, and part of that was the community input. When I’m taxed, I want to know where that money is going to go and what I am going to improve upon in my community.

What is your vision for the future of Lemon Grove’s zoning and development?

The process is in place so that everything is adhered to as laid out in our general plan. And a big part has to do with the heath, safety and well being of our residents. What I would like to see during that process is: What is the planned development? What is the impact? Is it fitting within our General Plan? And then also taking a look at the General plan — does it need to be updated? Because we can’t have five commissioners interpret it one way and five councilmembers interpret it another way.

I would have to exercise my due diligence to make sure that, even if I disagree or don’t think that should be there, it’s again, what are the documents saying that will be approved. And if we’re going to make an allowance for one, we need to be prepared to make that allowance for all. Even then, we have to have a standard for when those allowances are made. It can’t be case by case because I think we’ll only set ourselves up then for criticism, honestly.

What do you think about disincorporating the City of Lemon Grove?

You know, I think that Lemon Grove is a charming place. And I know that many residents, especially those who have owned homes here for decades, would love for it to continue with its small town charm. But there comes a time, too, when if it cannot sustain itself, that has to be an option, in order to keep resources at the level they should be. That’s part of why I’m going to go into this fighting to extract every penny from every dollar, trying to bring in partnerships that are willing to invest in Lemon Grove. So that we can continue to be a self-sustained small community.

If elected, how would you feel about collaborating on the City Council?

When we can take ourselves out of it, we are public servants. When we can step outside of ourselves to do the greater good, wonderful things can happen for our communities. It’s a lot of work though, it is hard, to step away from our own personal ideas, values, and desires, and then pull together as a whole group and work in collaboration for the whole. I’m hopeful.

What is something about Lemon Grove you wish more people knew about?

For more details on Brown’s campaign, visit her website. A full list of relevant dates from the Registrar of Voters can be viewed here, and for information on when, where and how to vote in the Lemon Grove election and other local offices, explore www.sdvote.com/.

Her refusal to address parents and problems within the Lemon Grove School District for years is enough for me not to vote for her. Running and hiding from constituents is not cool. The same parents who voted her in have been ignored for years. Too much of the "who you know". Why does she not know now what's going on with the City budget? She's lived here for years. Taking credit for things done is not cool either. The Library was done YEARS ago. The track didn't happen because the LGSD thought of it. I rather have someone new and screw up, than just a career politician to do the same old thing with city buddies. We need someone with courage, not fleet of foot.