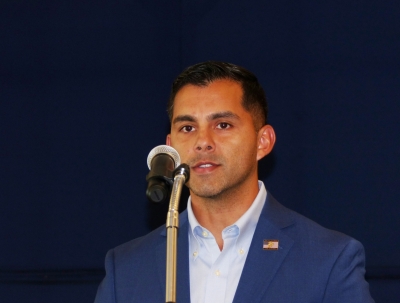 October 5, 2022 (Alpine) – California’s 40th State Senate District race is one of the most competitive legislative races in the state, Cal Matters reports. A former Marine Corps captain, Navy veteran and military prosecutor, Joseph Rocha is running against incumbent Brian Jones.  During the Candidates to Constituents forum in Alpine, Rocha spoke about what motivated him to run—and drew clear battle lines on issues separating him from his opponent.

“I’m running because I saw the fabric of this country falling apart,” Rocha said. He says he stands for opportunities for everyone.  “I learned the value of hard work, and one of the reasons I’m running is to make sure that hard work still stands for something....“This race is about working for you,” he told the audience.. He promised that if elected, he’ll be “fighting for workers, not special interests.”

He told voters that his opponent, Jones, “regularly votes against giving others a leg up and said that Jones’ largest funders including "big oil" as well as the pharmaceutical industry. (Fact check:  the pharmaceutical and oil industries are among the top 10 industries supporting Jones, according to Vote Smart.)

He accused Jones of misleading voters regarding his record. Rocha criticized Jones for pledging to support rights and freedoms, yet voting against a bill to lower the cost of prescription drugs, voting against expanding women’s reproductive care access, and voting against California making its own insulin to make medications needed by diabetics more affordable.

Rocha affirmed that he supports a woman’s right to choose, a key issue since the U.S. Supreme Court overturned Roe vs. Wade and gave states the right to restrict or ban abortion. State Senator Jones, by contrast, has a zero percent rating by Planned Parenthood and a 100% rating from pro-life (anti-abortion) groups, strongly opposing abortion access.

Housing affordability is a key issue for Rocha. On his website, he says he hears this over and over as he travels the district. “Families are stretching their budgets to continue living in the community they love. The life that my father provided for me and my siblings on a truck driver’s salary is no longer within reach for many Southern California families.”  At the forum, he spoke of seniors having to come out of retirement to take jobs and millennials having parents move in with them due to lack of affordable housing.

“We need commonsense solutions to ensure every family can make their rent and mortgage payments. I will focus on resources that help families remain in their homes, ending discrimination in the housing process, expanding access to first-time homebuyer loans, and investing in smarter community development,” he states.

As a veteran, Rocha wants California to do more to help those who served our country. “We need to do our part as a state to provide transition support for those exiting the military and more access to housing so that we can ensure no veteran is sleeping on the streets,” he states on his website.

A constituent asked about high gasoline prices during the Alpine Forum.  “I will be a staunch opponent of price gouging,” pledged Rocha.  “My opponent, one of his top three sponsors is big oil.”

ECM asked about the El Capitan dam in Lakeside, which has been rated by the state as in the worst possible condition and with the highest potential loss of life if it should fail, and noted that climate change experts are predicting more severe storms in the region.

Rocha criticized Jones for “leaving an infinite amount of money on the table in Sacramento,” adding, “he doesn’t believe in climate change.  I want to bring these dollars back to be sure we are well represented and not left out.”

He says he is proud to be a Democrat, a party “dedicated to the people, to workers, to families, to the values of empathy, compassion, and service.” The party registration is nearly evenly split in the newly redrawn district, unlike in the past, when Jones enjoyed a solid Republican majority among the district’s voters. Though Jones won the primary by roughly 9 percentage points, Rocha aims to close the gap by meeting voters, educating them on the issues, and campaigning with solid financial support in the general election from the Democratic party, labor groups and individual donations. The result may come down to turnout -- which party gets its voters to the polls.

Rocha comes from a working class background and has overcome challenges throughout his life to attain success.  He was raised by his father, a truck driver, in Southern California, after his mother lost custody due to battling addiction. His grandparents were positive influences throughout his life, and Rocha disclosed that he’d arrived at the forum after visiting his grandmother who is now in hospice, near life’s end.

Emotion evident in his voice, he praised his grandparents, who came to the U.S. as immigrants, and said he wants to fight for the values they were fighting for.  “I hope we can take back this ludicrous, outrageous idea that the values of service and patriotism, something as sacred as the hallowed flag,  are not for all of us,” he said.

Rocha joined the Navy as a teen and served as a dog handler working to find explosives in Iraq.  He was discharged under the military’s don’t ask, don’t tell policy, but later took a stand against the policy, testifying in court in a landmark case in which the Supreme Court ultimately ruled the policy unconstitutional. He then enlisted in the Marines, became a captain and served as a judge advocate. He has earned a law degree, but recent events have changed his career goal.

In closing remarks in Alpine, he recalled that during the January 6th attack on the U.s. Capitol, he was stationed at Camp LeJeune, realizing there was serious potential for U.S. troops to be deployed “in our own country, to defend it.”

Rocha concluded, “I realized I’d been called to serve differently.  As a lawyer, I can only enforce laws that exist.  I want to serve in ways to help write the laws to help our communities.”

Learn more about his candidacy on his website at https://www.rochaforsenate.com/jcr_oct5?splash=1.

does not even know how to follow rules. in santee there is an ordinance that campaign signs cannot be place on public land until 30 days before an election. jones started placing his signs out on oct 3rd 2022. do not come here and say it was his campaign staff the ball STOPS with him!