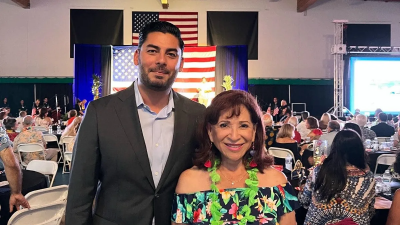 Party leaders held a press conference outside a condominium on Banker’s Hill that they said had been watched by a private investigator.

The party said Lawrence Hamilton, a former FBI agent, had obtained “more than 70 videos and photos” purporting to show Campa-Najjar living there. The building is located in the 53rd Congressional District, which is represented by Sara Jacobs, with whom Campa-Najjar is in a relationship.
“Campa-Najjar has a pattern of misleading voters for his own personal gain by using his family’s addresses to run in different districts,” the party said.
But Campa-Najjar, a two-time Congressional candidate who came in second to Councilman John McCann in the June primary for mayor, said he has had a residence in Chula Vista for almost 30 years.
“These claims only prove one thing: A desperate Republican attempt to try and deny the likely outcome of an election, before even a single vote is cast,” his campaign said in a statement. “There’s no question Ammar Campa-Najjar, a third generation Chula Vistan and resident of the city beginning in 1993, meets the residential requirements to run for Mayor.”
McCann beat Campa-Najjar by 31% to 23% in the primary, but all other candidates have since endorsed Campa-Najjar, as has Gov. Gavin Newsom and many Democratic Party leaders.

WOW!!! he stays at his girlfriends house a few times a month and the right goes crazy!!!! you jjones-lg are the one who should be ashamed making these false accusations! the right has a problem with majority rules in this country.
I'm pretty sure those of us in East County already know what kind of politician Campa-Najjar is. Clearly a carpetbagger, which has become a common occurrence of late. And I was a critic of Issa when he ran for the 50th but that was not illegal. Running for a local office you don't live in is illegal. Even sitting in an office where you don't meet residency laws is illegal. If this is to be the new norm the fine, make it legal and voters can keep electing politicians with little investment in their communities and lives. It makes me sad to think that my old home town has become so partisan that they are willing to accept this kind of illegal deception. The fact that the legal system is willing to overlook this is unacceptable. And it makes me angry that my Congressional Representative is party to this illegal deception of the voters. For her to stand in public and cry foul is plain scary and for the media to buy it is disgusting. Shame on you Sara and shame on you media. Keep it up California. We are already a one party state and heading to a point in our history that future generations will regret.