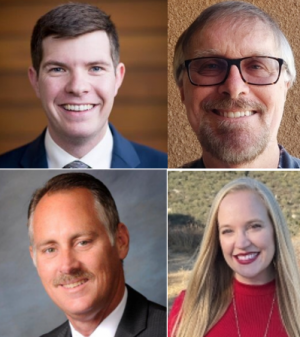 November 9, 2022 (Lakeside) – Lakeside Union School District’s governing board will look dramatically different as a result of yesterday’s election.  Three full-term seats and one short-term seat were on the ballot. But only one of the incumbents up for reelection, Andrew Hayes, has won reelection.  Three others – Bonnie LaChappa, Holly Ferrante, and Don Whiseman, are trailing by substantial margins.

All of the leading candidates are endorsed by the Republican Party, though the race is officially nonpartisan. In addition to Hayes, challengers Jim Bennett and Ron Kasper appear poised to win full-term seats, while Autumn Ellenson is winning the short-term seat by a resounding margin of more than two-thirds.

Democrats had endorsed Ferrante, Gordon and Whiseman, while Cruise and LaChappa had no party endorsements.

As of this morning, the results are: 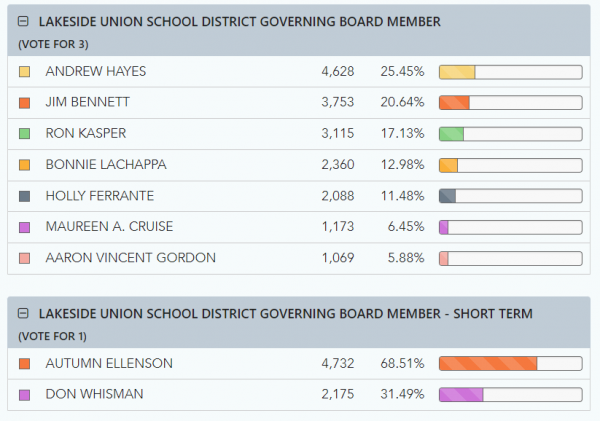 Who are the newcomers set to join the board?

Kasper has  masters degrees in special education and family counseling, and has completed PhD coursework in psychology before deciding teaching was his passion. He’s spesnt 30 years as a teacher with a background in family counseling and school administration training. He’s worked as a substitute teacher in the Lakeside district and as a community volunteer with the Lakeside Fire Department, on the Lakeside Planning Group, and with County Parks and Recreation.  “My priorities are a rescue plan for all kids who have fallen behind academically or socially after two years of COVID effects on our schools, ensuring we have updated and have the very best safe school plans for our children, and staff and spearhead further drug education as the epidemic of drugs and especially fentanyl is resulting in the loss of thousands of young people in the U.S..” Kasper stated in his ECM questionnaire.

Ellenson has a masters of arts degree in teaching. She has taught in elementary and middle schools, currently serving as a school administration and curriculum specialist She has three children in the district and says their needs have not been met in the past three years, citing learning losses during the pandemic. She has opposed mask mandates and keeping schools closed last fall, and believes “the most important thing is to keep our children in school” with support and interventions when needed. She wants to reflect community values and supports parental rights to provide alternative books to children, with a “common sense” approach to education, according to her ECM candidate questionnaire.

Bennett is a director of facilities who says he supports a “back to basics” approach to education including principles of reading, writing, math and sciences “without the influence of agendas and propaganda.”  He wants parents to have more rights and believes public schools should not be in charge of children’s health, religion, or social believes. “I believe that all students and staff have value and works because they are children of God,”  he wrote in his Voters Edge statement.

This kids have a chance!