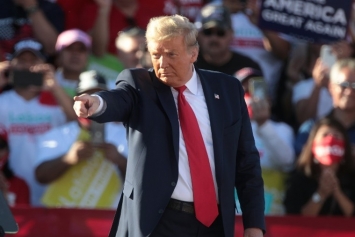 November 21, 2022 (Washington D.C.) – Twice impeached and under investigation for serious federal and state crimes, former president Donald Trump announced on Nov. 15 that he plans to run for president again in 2024.  The announcement, made at Trump’s Mar al Lago estate in Florida, came just days after most Trump-backed candidates suffered defeats in elections for Congress, Governor and other key positions across the nation.

Meanwhile in Washington D.C., Trump’s reelection announcement prompted Attorney General Merrick Garland to appoint a special independent prosecutor to complete federal criminal investigations into Trump’s incitement of violence in the January 6, 2021 capitol insurrection, his refusal to take action to halt it, his removal of numerous classified documents from the White House, and other potentially serious federal crimes.  The appointment of Smith as independent prosecutor aims to eliminate the appearance of partisan politics from any future indictment or exoneration of Trump.

The federal prosecutor, Jack Smith, is a former federal prosecutor who has most recently been working to prosecute international war criminals at the International Criminal Court in the Hague. He formerly served as head of the Dept. of Justice’s Public Integrity Unit, which prosecutes public corruption cases such as bribery and election tampering.

Ironically, Trump is also under investigation for pressuring election officials in Georgia to alter election results without evidence.

He repeated debunked claims that the 2020 election was stolen, despite 62 judges including some appointed by Trump finding no evidence of fraud to overturn results in any state.  Trump also called for an end to early voting used in 46 states and voting by mail available in 35 states, despite popularity of such measures with voters and increased turnout produced by making voting easier.  “I’ll get that job done,” Trump pledged. “That’s a very personal job for me.”

His announcement has been met with trepidation even by many Republican party officials and by some conservative media outlets.  Many view him as a likely loser no longer able to muster sufficient support to beat President Joe Biden, if Biden runs, or whoever the Democrats might run instead.

Both men would be the oldest to run for the office; Biden turned 80 this week and Trump is 78.

Though Republicans normally win many Congressional seats in midterm elections where a Democrat holds the presidency, this month’s elections results in Democrats holding the Senate, losing the House by only a handful of seats.  Democrats also defeated the vast majority of Trump-backed election deniers running for positions such as Secretary of State, as well as many Governor positions and other key races.

The legal clouds hanging over Trump could potentially land him in prison before the election, if he is convicted.  The most serious potential charges could bar him from holding federal office, if it were found he engaged in insurrection against the U.S. during the Capitol assault, or if classified documents were provided to enemies of the U.S., for example. He also faces various civil suits in multiple civil suits ranging from fraud allegations to rape.

Democrats and independent voters have been angered by Trump-appointed judges pushing through the Supreme Court’s overturning of Roe vs. Wade/abortion rights, his opposition to serious action on climate change, his early denial of COVID-19 as a serious threat, and Trump’s divisive rhetoric and statements bashing minorities while praising white supremacists, as during a neo-Nazi march in Charlston.

But now, even many who support Trump’s economic policies and views on issues such as immigration and abortion have had enough, and believe another candidate would be more electable.

Former House Speaker said this week that Trump is “unelectable.” The former Trump supporter said on ABC that he is now a “never again Trumper.”

Trump is not the only ousted president to seek a return to office.  But he would be the first to run since Theodore Roosevelt’s failed bid in the early 20th century. Only one former president, Grover Cleveland, has been successful in winning the presidency again, way back in 1893.

The clock is ticking on federal and state investigations to file charges and obtain convictions, meanwhile, since if Trump does win reelection, he would be immune from prosecution while in office.

In order to keep our democracy, voters need to know the context, as well as recent events warranting reporting. We should know that anyone running for president has a relevant history.  Trump was supported in his first election by Vladimir Putin, putting our national security at risk.  In addition, he took documents of the highest security when he left the office.  Furthermore, he was the first president to try to prevent the transition of power to the newest elected president, by an actual attack on the Capitol by his armed followers.  Current investigations will determine his future availability to serve.  Voters must be reminded of his record, to avoid putting our nation at risk again.

But the US needs enemies to sustain the obscene Pentagon budget and the endless wars. The US was, along with Germany, the prime mover for the current war by moving NATO up to the Russian border, a bad situation that has been warned about for many years, but done anyhow by Biden. Trump didn't trust NATO and he would not have allowed decisions which have led to the current debacle in Ukraine. Also Trump tried to end the decades-long US war with North Korea, but of course that went nowhere. And security documents? Hillary had a cellar full of them and as Secretary of State (one if the worst ever) she used her insecure private communications for official business and got away with it.

He called it "genius" so he obviously approved of Putin's actions in Ukraine; he would not have sent weapons to help Ukraine fight off the Russians, as the Biden administration has done.

has been warned about for decades, by responsible people. But NATO (a US puppet) has expanded eastward. Also the US has made a large US effort to train Ukraine forces and make that country a de facto member of NATO despite the neo-Nazi element in Ukraine. Ukraine killed 14,000 citizens of the eastern Ukraine's Donbas, and had a plan to destroy even more of the ethnic Russians in Donbas, so Russia initiated its military actions to support the ethnic Russians in Donbas, and also eliminate the NATO expansion to Ukraine, a new country with a long border with Russia, even into Russia geographically. The US was warned by Russia last December that changes were needed, and there would be trouble. The US thrives on endless war so they brushed Russia aside. Russia can't stand threats to its security any more than the US would. . . So Trump was correct, and the US and Europe (especially Germany) will suffer (and is suffering) from their mistakes.
what the public thinks. Sixty-five per cent think the country is on the wrong track, with 63 percent disapproval of Congress (Real Clear Politics). So the situation is ripe for an outsider like Trump. The establishment doesn't like someone rocking the (corrupt) boat, therefore the constant attacks on Trump.

Hosting a known White Supremacist and someone that is Pro-Dictatorship, Nick Fuentes, is that why Trump is considered a serious contender for 2024? Good luck with that!

And sadly, doesn't care enough for those that admire him, to let you go. A serial grifter, it's who he is, and he'll gladly take you with him.

You should be embarrased for portraying this article as "news". This tripe is a biased hit piece clear and simple.

Don't panic Mirriam, just keep telling yourself " He doesn't have a chance".

against free speech? Everyone should agree with you? Good luck.
TRUMP LAUNCHES 2024 PRESIDENTIAL CAMPAIGN. This is how it should have been shown.

without also pointing out the many serious crimes he is being investigated for, his refusal to do anything to halt the violence at the Capitol for over three hours (it was Pence who called in the National Guard), etc.  When a candidate is potentially about to be indicted for crimes serious enough to potentially prevent him from holding public office, the public has a right to know that.  Media's role is not to whitewash truth or blindly cheerlead any candidate, but particularly one who might not even be able to hold office if elected, and whom many prominent people in his own party have now backed away from.  It's also relevant, even to those who like his policies, that Trump backed candidates performed poorly overall in the midterm elections, a factor voters may want to consider when choosing who to support in the primary election -- a Republican not tainted by scandals and potential criminal indictment might have a better chance of winning.

You just CAN’T report on President Trump announcing his wonderful news he will be running for President in 2024, WITHOUT the special council B.S. sharing the HEADLINE. YOU ARE SO BIAS. NOT WHAT A GOOD REPORTER WANTS TO BE KNOWN FOR. Some of us would like to see unbiased reporting in this NEWS.
in the standardized 'news' we're fed every day. All the major medias report the same "truth" ever day, feeding us the pablum to keep their profits up and the people down. Isn't it odd that every media source sounds like every other? no dissension? no disagreement? It's necessary for us to go to independent sources (until they're silenced by the government). Norman Solomon wrote a book on it: "War Made Easy: How Presidents and Pundits Keep Spinning Us to Death"