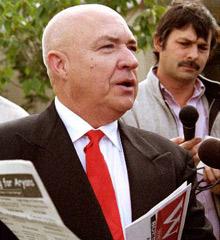 Metzger shocked local Democrats in 1980, when he won a three-way Democratic primary. Democratic party leaders condemned the racist views of Metzger and endorsed Republican Claire Burgener. Burgener won with an unprecedented 86% of the vote. Metzger later ran for U.S. Senate as an independent and has since joined the Republican Party.

Founder of the White Aryan Resistance (WAR), Metzger was ordered to pay $5 million in 1989 for intentionally inciting skinheads in Oregon to provoke violent confrontation. Several of his followers in WAR were convicted of brutally killing Mulugeta Seraw, an Ethiopian man, in Portland, Oregon. A lawsuit filed by the Southern Poverty Law Center (SPLC) bankrupted Metzger, whose home and property were seized to satisfy his debts. The SPLC describes him as “one of the most notorious living white supremacists” in the U.S.

In 1991, Metzger was jailed for six months in a cross-burning incident. He wound up in jail again in 1992 for violating Canadian immigration laws when he tried to enter the country to promote hate. In 2009, his home was searched during an investigation into a mail bomb attack that injured an Arizona diversity director.

Local Democrats in San Diego and East County recall Metzger’s unwanted appearances at party functions, including local meetings as well as a state Democratic convention in Sacramento at which state police were summoned to prevent Metzger from being seated due to a procedural violation. Metzger claims on his website that he was removed from that convention at gunpoint. This reporter, who witnessed state police refuse Metzger and his bodyguards admission to the 1980 convention, did not observe any guns drawn.

The bio on his website states that he “has been involved in brawls, riots, negotiations with the Black Panthers and Louis Farrakhan, race discussions in Tokyo twice (1993 and 1999), half dozen assassination attempts… reborn from right-winger to racist, he has been subpoenaed to Grand Juries, IRS hearings, Treasury Department inquiries (racist message on back side of fake dollar bills), multiple FBI interrogations ("I have nothing to say"), denounced by presidents, congressmen, politicians.”

He also admits to ordering murders be committed and appears unrepentant: “Sued for 10 million (Tom told John who told Mazzella who told skin heads to kill non-whites), has had his house of 30 years seized and sold, work truck and tools seized and sold, and ordered to work in "non-white" areas during probation (which he used his skills in promoting black and brown self-reliance and racism).”

The New York Daily News, in a March 9,, 2010 article, states that Metzger’s “anarchist group openly promotes ideas such as racism, the use of abortion as a means of “non-white population control,” and the collapse of the U.S. government.”

In an interview with a Fort Wayne news station, Metzger reportedly stated, "I'd go to Washington and have a fistfight every day," the New York Daily News reported.

Metzger is attempting to lure working people into voting for him, hoping to tap into growing racist and anti-government sentiments being voiced publicly at T.E.A. Party rallies and other public forums.  But he is poorly funded, Metzger is believed to have little chance of winning against incumbent Republican Mark Souder, who has held the Indiana seat since 1994.

Wow . . .this Metzger guy has got some very serious issues. If all of the accusations that are mentioned here are true(some links to supporting articles and sources would be helpful), then voters definitely should know this info. With growing angst against government and leadership, it could be very easy for someone with a resume like this to get into office. Information and facts are like the insurance policy for the modern voter. That's why being an informed voter is so essential in an uneasy political climate.

#1 the headline reads KKK Grand Dragon. I have not been a member of the KKK since 1980 #2 It says I admitted to ordering murders.That doesn't even make sense. If it were true I would be in prison or executed.I never said anyone pulled guns on me at the democrat state meeting. Its a waste of time to remind you people of all the good things I promoted when I ran for Congress and the U.S Senate. I guess Ms. Copley will never forgive me for exposing the fact that ...[EDITOR'S NOTE:  REST OF COMMENT REMOVED DUE TO A VIOLATION OF ECM POSTING RULES].

Here is a screenshot from your site for any doubters as to your exact words.  Your own bio on your website states you instructed others to kill people:  "Tom told John who told Mazzella who told skin heads to kill non-whites."   How is that not ordering murder?  Are you now saying the statement on your website is untrue?

The article also accurately states that it was your followers, not you, who were convicted criminally of the Oregon man's death, though a civil court held you responsible for inciting them to violence.

I did amend our story to say white supremacist in the headline and noted in the text that you are a former KKK grand dragon.

Our publication has no association with the Copleys (in fact I have sued the Union-Trib's publisher in a case that is still in the courts on a copyright infringement issue), so I am not sure why you would insinuate that our story is somehow motivated by any grudge the Copleys might have with you. I have deleted a portion of your post that made an unsubstantiated claim about a Copley family member and contained profanity.

You would be advised to review our forum rules, which include no racist remarks, no personal insults, profanity, or potentially libelous remarks about others if you wish to retain posting privileges.

This article has several provable lies in it. Is this mag financed by Havana or what?

If there is a provable error we will address it appropriately.