That vote was taken over objections of numerous Lakeside residents at a meeting convened on just 24 hours notice. Board members have said that they lost confidence in Baker but declined to provide details, citing the Board lawyer’s instructions not to discuss a personnel matter publicly. 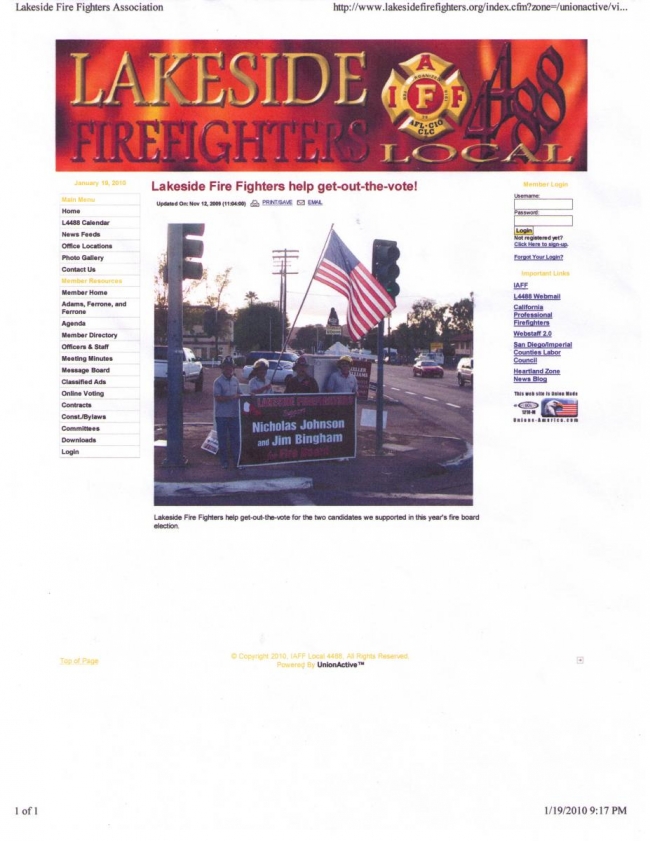 Sorry Miriam but I question much of what you print at this point. Contrary to your story's claims of "Gaps in records" and "Two filings appear to have never been turned in", a quick check on the FPPC website shows this to be untrue. While the Lakeside Firefighters PAC was accessed a $400 fine for late reports, it plainly states on page 3 of FPPC no. 10/040 that "All statements have now been filed in connection with these violations".
Regarding your reporting of "large donations" and "the Lakeside Firefighters PAC had amassed $63,771, nearly all from unstated donors", again, not true. Is this theory carried over from "Lakeside Firster" Milt Cyphert's faulty timeline and accusations in the comments section of your Feb. 25, 2010 story? The same comments where you refer to "a large anonymous donation according to the firefighter union's docs". What documents are you talking about? In these same comments you also ask Milt to send you the docs regarding this whole theory and that you would gladly post them there as proof. Well, where are they? I am asking that you back up your "reporting" with proof. What proof do you have that any money was ever contributed to the Lakeside Firefighter PAC that did not come from the pockets of Lakeside firefighters?
Also, how did you try getting in touch with the Lakeside Firefighters as you claim? I sent them a message on their website by clicking on the "Contact Us" button. You can see it on the picture you have of their website above. I got a response the next day. They claim that they have never heard from you and that only their members contribute to their PAC.
I can only conclude that you are biased against the Lakeside Firefighters for some reason. Are you or any of your staff a member of the small "Lakeside First" group? It sure seems like it judging by your slanted stories.

It would be nice if your blog writer or writers would contact the Lakeside Firefighters Union for a statement about this rather than relying on unnamed "area insiders".
I, for one, would be interested in a complete story rather than just a one sided piece.
With the prevalent lack of fact checking and investigation of both sides of a story, reading the ECM blog is comparable to reading that bastion of yellow journalism the SD Union Tribune.

some time ago and left a message inquiring about the anonymous donations, but got no response.

We would be happy to interview a union official about this issue. Contact editor@eastcountymagazine.org to arrange a time.