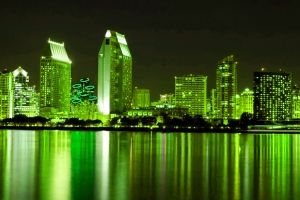 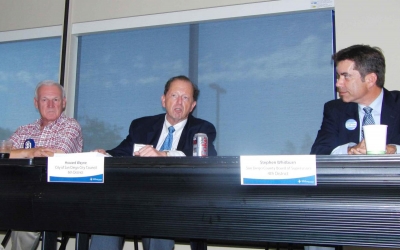 The most heated exchange of the afternoon, County Supervisor Ron Roberts and his opponent, Steve Whitburn, candidate for the fourth district ( which includes the College, Rolando, Paradise Hills and City Heights areas in east San Diego) debated cuts to public transit in San Diego. Whitburn accused Roberts of voting to eliminate a large segment of Sunday bus service and “effectively stranding people in their homes on Sundays.” Whitburn said that Roberts’ vote creates a downward spiral for public transit as cutting routes and frequencies make fewer people ride the bus and the fewer who ride the more cuts that are made.

Robert’s replied “of course the bus doesn’t pick up people and drop them off exactly where they want to go.” He also spoke of voting for two increases in sales tax to finance public transit and attributed the cuts in service to budget issues in Sacramento.

Whitburn emphasized the need for greater funding for public transit and suggested that federal, state, as well as local funds be used to subsidize mass transit. He also discussed the continuing need for neighborhood grants. Both stated that they oppose Proposition 23. Whitburn spoke of the need to enforce environmental regulations and Roberts mentioned the need to enforce performance- based regulations. 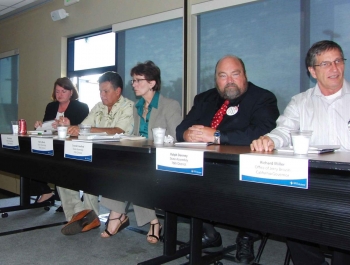 Candidates in races for statewide office from East County weighed in as well. In the race for the 78th Assembly district, which includes Lemon Grove, Chula Vista, Bonita,and Spring Valley, Marty Block(D) highlighted the need for all stakeholders to work together to solve environmental issues. The Republican Candidate, Rick Powell, was not in attendance.

The Republican and Democratic candidates for the 76th assembly district, which includes City Heights and North Park, Ralph Denney(R) and Tony Atkins (D) both stated support for environmental protection. Atkins discussed her endorsement by the Sierra Club and Denney claimed support from environmental groups within the Republican Party.

Representatives from Jerry Brown and Meg Whitman’s campaigns for Governor agreed in their opposition to Proposition 23. Whitman recently switched positions on the initiative, while Brown has been a long-time opponent. Seemingly in conflict with the initiative’s intent, however, Whitman’s representative discussed her plan to suspend parts of AB 32 for one year until business leaders and academics can meet to discuss how to implement those sections without risking job. Brown’s representative spoke of Brown’s full support for climate based initiatives.

“We don’t really care about global warming,” or support for Proposition 23 was relayed by a spokesman for Chelene Nightengle, the American Independent Party candidate for Governor . 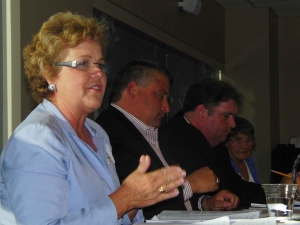 At the end of the event, candidates for federal offices discussed environmentally- related issues. Francine Busby(D) who is running for the 50th congressional district, which includes parts of Escondido, linked alternative energy with national security. Busby’s opponent, Congressman Brian Bilbray (R) was not present, however he opposed a cap-and-trade bill aimed at reducing global warming, stating on the House floor that “It will take 150 years to correct the mistakes” in the bill.

A staffer for U.S. Senator Barbara Boxer focused on the potential for green technology to generate jobs. Boxer chairs the U.S. Senate Committee on the Environment and Public Works. She held hearings on climate change, supports legislation to reduce greenhouse gas emissions and authored a bill to require federal buildings to be more energy efficient.

A representative for Carly Fiorina (R), who is running against Boxer, also declared support for green initiatives. But according to the Los Angeles Times, Fiorina recently announced endorsement for Prop 23 after declining to state her stand on the issue during a debate with Boxer earlier this month; the Fresno Bee reports that backers of Prop 23 also hosted a fundraiser for Fiorina.

Miriam Clark, Peace and Freedom candidate for Congress, who is running against Busby, emphatically opposed Propostion 23 and stated that the wars in Afghanistan and Iraq are to support private corporate interests. Duane Roberts the Green Party Candidate for US Senate who is running against Fiorina and Boxer, called for reducing bus fares by half as well as free tuition for students in Public Universities. Duane, a former Orange County newspaper publisher, spoke of how candidates run for office to call attention to important issues.

The CSE is a California non-profit organization that educates the public on Environmental Issues and promotes environmentally sustainable policies.

Aren't Brown and Whitman against prop 23? The article states that they support it.

We've corrected this error and appreciate you bringing it to our attention.