Poway’s Aptera among companies that will benefit from measure 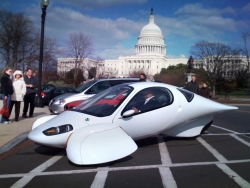 The amendment, included in the Energy and Water Development Appropriations Act (H.R. 3183) which passed by a 308-114 vote, would expand the type of cars eligible for the Department of Energy’s (DOE) Advanced Technology Vehicles Manufacturing Incentive Program so that new companies and designs can compete on an even playing field with more traditional automakers.

"This is a huge win for scientific innovation and the environment," said Bilbray. "I've always said that we need more innovation and less regulation when it comes to promoting new ways to save energy while saving money at the pump. Passing this legislation shows that there truly is a bi-partisan, pro-environment and pro-innovation movement in Congress."

“We need to think outside the box when developing new fuel-efficient vehicles, and that is exactly what some new car designers and manufactures are doing,” said Schiff. “Obsolete bureaucratic definitions should not create roadblocks and stifle innovation. This legislation clears the way for domestic manufactures to develop new innovative fuel-efficient cars here at home.”

The amendment makes fully-enclosed vehicles that are capable of carrying two adults and get at least 75 miles per gallon eligible for the DOE’s Advanced Technology Vehicles Manufacturing Incentives Program. The program provides loans to car manufacturers for up to 30 percent of the cost of reequipping, expanding or establishing manufacturing facilities in the U.S. for advanced technology vehicles or components, or for engineering integration performed in the U.S. The bill is expected to pass the Senate in the coming days and then be sent to the President to be signed into law.

Could you be more specific? Where in Poway is Aptera located?