View our video adventure on Lakeside River Park, where an East County community has reclaimed a former sand mine site to create trails, habitat, and a place of beauty to enjoy the riverfront--and scroll down to learn more about this unique environment.

December 5, 2010 (Lakeside) --Growing up in Lakeside, California, the San Diego River has been a big part of my life. Although I’ve only experienced the full force of the river two times in the late 70’s and early 80’s, it has always fascinated me and captured my imagination. 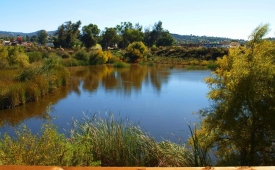 The river has a lush history, from when the Native Americans lived freely in this beautiful San Diego River Valley for many centuries, to the late 1800’s when our back country towns began to grow . With growth came a demand for building materials .The sand that was naturally here in the San Diego River basin was a key component to sturdy cement and other building materials. 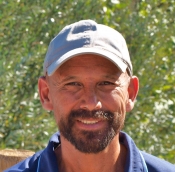 This particular sand, with great holding power because of its course and jagged edges, became highly demanded. Many sand mining company’s took advantage and have made their fortune in selling the sand. Unfortunately, when sand is mined it leaves huge holes in the river bottom, never to be replaced except by industrial waste and other debris that is not natural to the river.

Fortunately, the town of Lakeside has a unique situation: the mining companies have donated back river land that was previously used for sand mining. 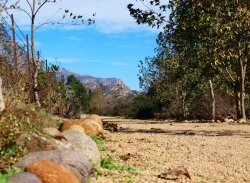 The Lakeside River Park Conservancy is taking full advantage of the opportunity to restore river habitat. Although it’s not what the river bottom naturally looked like, this place has still taken on a beauty all of its own with the help and intervention of the Lakeside community.

The mission of the Lakeside River Park Conservancy, founded in 2001, is to preserve and restore the biological integrity and beauty of the San Diego River while integrating recreational, educational and cultural opportunities for youth, seniors, families and citizens of East San Diego County.

he work the Lakeside community has done is phenomenal. The view from the river trail is amazing as you look south over the river channel and wetland ponds, where many bird species have made their homes.

As I strolled along the River Park trail for the first time, I was taken back by how beautiful it really is with its ponds and native plants. The River Trail is quite except for the occasional golf ball being teed off with a loud “FORE” (and golf balls occasionally going in the wrong direction from a nearby course), it is very peaceful . The trail also has several sitting areas and an observation deck perched high above the ponds below, with a scenic view of Cuyamaca Peak and El Cajon Mountains to the east. The trail also has a lower area below the tree line, where one can sit and admire the birds or the diverse plant life including cottonwoods, oaks, eucalyptus trees and many other forms of shrubs and river plants. 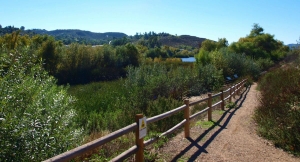 As I rode along on a tour of the park with Cindy Collins, the River Park’s Membership and Volunteer Manager, she reminded me that the San Diego River is a chain tying San Diego’s East County and the coastline together--from the Cuyamaca Mountains and Julian to the Pacific Ocean. As each community along the way begins to restore its section of the river, these parks become jewels on a sparkling necklace-- and a beautiful necklace at that.

The trail is open to walkers, runners, bicyclists and equestrians.

For now, there are two entrance locations, one near 11634 Riverside Drive between the golf course and a industrial plaza, and a second at the corner of Lakeside Ave and Channel. The Channel Road entrance has a handicapped drop off spot. Both currently have on-street parking.

Behind-the-scenes guided tours are available, lasting about an hour. For more information contact:

Sorry for the inconvenience. Here is the Lakeside River Park WS. http://www.lakesideriverpark.org/