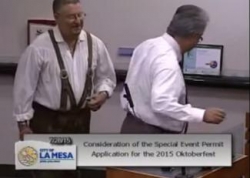 For nine months, the City allowed the LMVMA to carry debts for two festivals that grew to $37,229 without sending the merchants’ group to collections, but Council  balked at taking further risk when the group applied for a new permit. With the threat of no further permits, the LMVMA was forced to come to the table if the association wanted any further special event permits.

LMVMA Entertainment Manager Joe Dyke sought to charm the Council with German phrases and a vision of oompah-pah bands, folk dancers and Bavarian beers. Oktoberfest 2015 will go “back to the original, the good old times, the way the Oktoberfest was meant to be,” he said. (See full video clip.)

LMVMA attorney Jessica McElfresh tried to put to rest what she called “rumors,” saying, “One is that there’s no current issue with the status, the non-profit status or anything such as that with the Village Merchant’s Association, nor any pending litigation to the best of my knowledge, and I think I would have noticed that as their attorney. Also any rumors that they are cashing checks in advance or deposits such as that are unfounded and untrue.” (See full video clip.)

“They also did provide as part of their working with staff towards this, they did provide the financials to the City,” McElfresh continued.

By telephone, however, City Manager Dave Witt confirmed the City has not seen any financial information from the LMVMA.

In an interview after the Council meeting, Arlene Moore, LMVMA President, chose to remain silent on such issues, saying, “I don’t need to address something that isn’t true. It will go away.” She continued, “I don’t get anything out of this. We’re not perfect, but we’re doing the best to serve the community.”

Moore said a $15,000 cashier’s check to the City two weeks ago came from funds in LMVMA’s bank account they had been reserving for expense for Oktoberfest 2015, and they would have “no problem” making upcoming payments. When asked how they will pay expenses for 2015 if they’ve given money set aside for it to the City, Moore replied, “I don’t know the financials.”

McElfresh told the Council the unpaid debts to the City were “a first time ever, unprecedented event,” and argued that “while it is fair to expect that there will be no repeat, I do think it’s also fair to play it back against the many years of successful performance and look at some of the various events that may have lead to some difficulties with last year which have been discussed ad nauseum, we don’t need to unpack again.“

The City is not the only party to whom the LMVMA is in arrears. On July 16, Jack Leary, who has worked for the LMVMA for 23 years on events including car shows, Christmas in the Village and Oktoberfest, hand delivered a letter to every business in the downtown village. The letter stated that due to several months of unfulfilled promises for payments, he was going pursue a small claims action against the LMVMA for unpaid bills for four and a half months work soliciting sponsors for the 2015 Oktoberfest.

Anna Sanfilippo of Sanfilippo’s Pizza asked the Council to consider allowing Oktoberfest on both sides of La Mesa Boulevard, or allow parking spaces to be reserved for her customers during the event, and that porta potties be located elsewhere. “What do you want me to say to you? I’m not happy about this. I’m very, very disappointed in the City, or maybe it’s not even the City,” Sanfilippo said. She refused to acknowledge LMVMA Executive Director Vigil as she walked out of the meeting past him.

Four people spoke to oppose the permit, remind the Council of its fiduciary responsibility, and recommend requiring full payment of estimated 2015 costs before a permit is granted.

David Smiley said he spoke as a taxpayer as well as someone who has been involved in planning budgets and post-event profit and loss reports for the large beer garden at the Oktoberfest for the last seven years. “It boggles my mind how staff could arrive at any recommendation without first seeing both last year’s [profit and loss] and this year’s projected budget, since this year will include a large beer garden event they’ve never run,” said Smiley, who works for the La Mesa Chamber of Commerce which has previously run the big beer garden. (See full video clip.)

Smiley ran the Council through a spreadsheet he created based on the LMVMA’s own numbers on their 2015 permit application and IRS filings, and the costs to run the big beer garden in past years, to predict a loss of $50,000. “I don’t care if they have this event. I’m not for or against them putting on the event, that’s not my issue. My issue is my tax dollars be protected. And so I would recommend you, if you do approve them to go forward, take all your money up front--otherwise you may never see it,” Smiley concluded. (See full video clip.)

Lynne McRae, a certified public accountant, current member and past treasurer for the LMVMA, read from a letter she submitted to the City. “I’ve reviewed the operating by-laws of the Merchants Association and they’re seriously out of compliance. There have been no membership meetings, there are no election of board [members], failure to provide reasonable financial reports when they’re requested, refusal to accept qualified merchants’ applications, likely insolvency, secret meetings, deliberate and willful exclusion of merchants. These failures are real and they have put this organization at a high risk of a non-profit status revocation,” she wrote.

Jim Wieboldt works in law enforcement and is a former director of the LMVMA, and his wife Kelly owned Unique Travel in the Village for years. He, too, sent a letter to the City Council (page 1, page 2). At the City Council meeting he stated that he and his wife had asked unsuccessfully for three years to see the organizations financials.

“There have been requests to the Internal Revenue Service in writing, and to the California Attorney General, to revoke or suspend the non-profit of the Merchants Associations [based on] violation of the California Corporations Code of California,” Wieboldt stated. He referred to McElfresh’s denial as “smoke and mirrors.” A law enforcement investigation is not the same thing as litigation, nor is a defendant or their counsel informed when an investigation is being conducted, he explained. (See full video clip.)

Peter Carzis of Peter’s Gentlemen’s Resale Clothiers in the Village advised the Council, “You know they get all their money up front from the vendors. Why don’t you? That’s fair. They get theirs up front. Get a certified check for $75,000 and walk away from this stuff. You don’t have to put up with it.” (See full video clip.)

The Council deliberates the conditional permit

Mayor Mark Arapostathis voiced his views. “I think that when it comes to this, that in my opinion staff is looking out for the best, that the best intentions for the City and what can be done, including whether or not an event is going to hurt or, hurt the City or not.”

Councilmember Kristine Alessio replied, “I tend to agree with you. We asked staff, I know that there were several meetings where Mr. Witt has the opportunity to ask every question that he wanted and if there was not something to his satisfaction regarding any of the inner workings of the organization he could have at that point per Council direction put the breaks on it, and I’d be glad to approve staff’s recommendation.”

Councilmember Bill Baber suggested including reserved parking for Sanfilippo’s when the motion is made.

Councilmember Ruth Sterling commended staff for adding a 25% deposit for estimated expenses, however voiced concerns based on past performance about collecting the remaining 75% after the fact.

None of her Council colleagues agreed however, and the vote passed 4-1 to grant the conditional permit as proposed by staff, with the inclusion of reserved parking spaces for Sanfilippo’s.

The Council deliberates about closing times

Although City staff report recommended closing everything at 10:00 p.m., before the meeting Vigil e-mailed the Council a counter proposal for staggered closing times, closing booths on the street at 10:00 p.m. and moving the crowd towards the food court and beer gardens, which would close at 11:00 p.m.

Therefore, early in the meeting Sterling requested the issue be bifurcated to allow a separate vote on closing times.

Councilmember Guy McWhirter expressed his concern over traffic if everyone left at the same time, and cited his experience of an unpleasant hard closing last year. McWhirter moved to approve the proposal for a staggered closing, and Alessio seconded the motion for the sake of discussion.

Baber inquired of the City Manager whether staff’s recommendation stemmed more from a financial issue, a public safety issue or an efficiency issue.

“To me it’s not a financial issue; it’s a logistics and a safety issue. Absolutely. The cost recovery is the burden of the applicant,” Witt replied.

Sterling remarked, “Before you vote, I would just like to say Council and Mayor, you know in the last vote you made it clear that the reason was, well you didn’t want to micromanage…. In the same token here we have in the staff report, ‘Staff is strongly recommending a 10:00 p.m. closing for all activities to correlate with youth curfew and noise ordinance limits.’ Our Police Chief wants that, our City Manager advocates it, and yet oh, we’re going to go along with the Merchants Association with this. But the prior vote you wouldn’t listen to trying to get a percentage in here that we’d feel comfortable with if there was a non-payment. So I hear it, I hear you.”

The final vote was two for (Baber and McWhirter) and three against (Arapostathis, Sterling and Alessio) a staggered closing, meaning that the event will close entirely at 10:00 p.m. per staff’s recommendation.

The other restrictions approved per staff recommendation include: