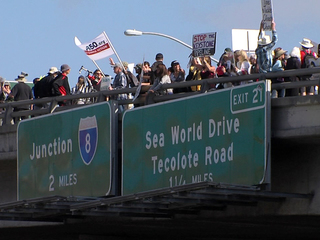 June 3, 2013 (San Diego’s East County) – The House and Senate have approved the controversial Keystone Pipeline, sending the measure to President Barack Obama’s desk.  The President faces mounting pressure from major campaign contributors urging him to veto the measure due to its negative environmental and climate change impacts; others urge support to create jobs.

Local representatives split down party line, with Republicans Duncan Hunter and Darrell Issa voting for the pipeline, while Democrats Susan Davis, Scott Peters and Juan Vargas voted against it.

"I opposed the House majority's bill to waive environmental standards for the Keystone XL pipeline where the United States takes all the risks (oil spills, climate change) without the reward of lower gas prices and increased supply,” Davis wrote in a newsletter to constituents. “We don’t want the oil spill that happened in the Gulf of Mexico to occur on land. A comprehensive and transparent environmental review process is absolutely critical.”

Hunter, in a statement last year, explained his reasons for supporting the project. “Construction of the Keystone Pipeline not only represents a major step toward achieving greater energy independence, but it also stands to create thousands of jobs in the energy and manufacturing sectors.”

Some environmentalists have said it will be “game over” for climate change if the pipeline is built due to the unprecedented massive amounts of carbon that would be released by mining the tar sands.

The Chamber of Commerce has been lobbying in support of the pipeline to fuel jobs.

But Billionaire climate change activist and Obama backer Tom Steyer has sent the President an open letter threatening to use the NextGen Action group to mobilize Obama campaign supporters in an organized effort to push the President to oppose the project.