Update: A Union-Tribune article here revealed that Peter Cuthbert, 83, admitted responsibility for the mailer, which he says was sent to 15,000 addresses in La Mesa. A less than repentant sounding Cuthbert was quoted, saying, "If I get in trouble for doing this, I'll pay the fine."

October 30, 2010 (La Mesa) -- A mailer from an unidentified source calling itself the “La Mesa Coalition for Better Government” arrived in mailboxes around town yesterday, criticizing the three incumbent candidates for Mayor and City Council, and touting three of the four challengers (Laura Lothian, Ian Shiff and Kevin Rynearson).

“They are young, vital and share a vision for La Mesa beyond the evident complacency of today’s Council,” the flyer read, and promised to encourage development like “office buildings, hotels, small conference center” in the Village.

Shiff said he knew the identity of the person or persons who sent the mailer, but declined to identify them. He agreed to ask the responsible party to contact ECM, however we have received no response from the sender.

ECM called mayoral candidate Laura Lothian to inquire about the flyer. “I’m going to read my e-mail first, and talk to my political consultant,” Lothian said, and hung up on our reporter. The Union-Tribune later quoted a written statement in which she shifted responsibility to the anonymous donor, "My understanding from my campaign consultant is this postcard is not a slate mailer but an independent expenditure because I didn't pay for or produce the piece…Additionally, the person who paid for and produced this card may have certain responsibilities for reporting.”

Rynearson did not return calls to ECM, nor, it would appear, the Union-Tribune.

Shiff told ECM that he was contacted by “a concerned citizen,” but he told them he was not planning on raising or spending more than $1,000 on his campaign. He said the citizen agreed he would be on the mailer with Lothian and Rynearson anyway, and wrote, “To reiterate what I said – I approved of it – it was an independent expenditure that I was not monetarily involved in. I thanked him but had no input on the message within.”

When asked if he had talk about the mailer with the other candidates, Shiff replied “I think we probably talked about it in passing conversation, yes.”

On it’s website, the FPPC states, “The Fair Political Practices Commission wants to help ensure the public's right to know which interests are funding political campaigns. Full disclosure allows voters to make informed decisions before casting their ballots. The links below provide additional information about the impact Independent Expenditures have on elections.”

An expenditure of over $1,000 would trigger a 24-hour reporting requirement, however it is not possible to check records to see if one has been filed until opening on Monday.

While reporting laws are complicated, it appears likely that candidates will have to report one-third of the value of the mailer as an in-kind donation, if it brings them above a $1,000 threshold.

The FPPC Form 400 defines a “Slate Mailer” as “a mass mailing that supports or opposes a total of four or more candidates or ballot measures,” and “Slate Mailer Organization” as:

While there are only three candidates on the mailer, it also includes recommendations on and one county and nine state propositions.

Incumbent Councilman Ernie Ewin stated, “It’s unfortunate that this would go out without identifying the source. Everyone has a right to express their opinion, but they need to follow the rules that safeguard advocacy.”

Below is the mailer in question: 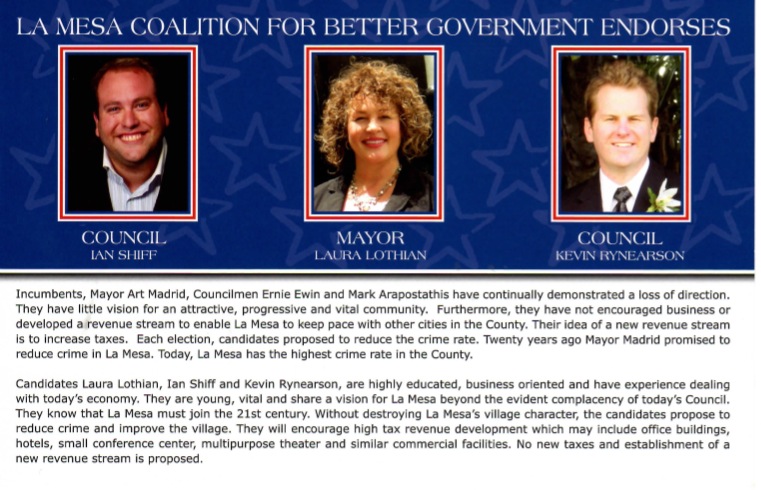 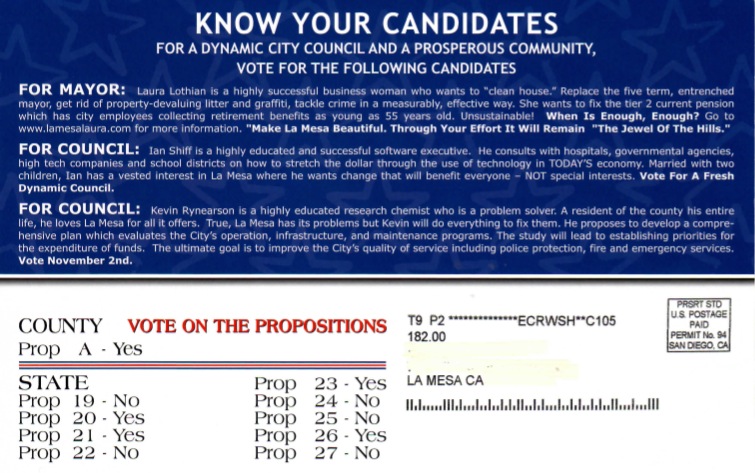