Update: A Union-Tribune article here revealed that Peter Cuthbert, 83, admitted responsibility for the mailer, which he says was sent to 15,000 addresses in La Mesa. A less than repentant sounding Cuthbert was quoted, saying, "If I get in trouble for doing this, I'll pay the fine."

Candidate Says he has the Right Chemistry for City Council 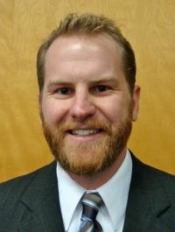 In Part VII of this series on election races in La Mesa, East County Magazine spotlights City Council candidate Kevin Rynearson. For this series we asked all candidates the same set of questions on local issues, with an open invitation to bring up anything else they would like to discuss at the end of the session. We want each candidate to speak for themselves.

September 27, 2010 (La Mesa) – Kevin Rynearson is a 28-year-old student currently working on his third year defense and PhD in organic chemistry at UCSD, specifically in RNA anti-viral therapies for Hepatitis C. Now he thinks he has the formula to improve La Mesa.