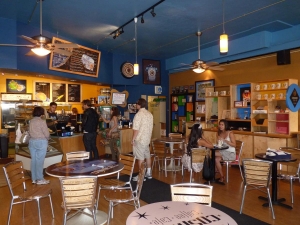 Multiple customers at Cosmos Coffee paid for purchases with $20 bills, receiving $17 in change.

But Union Bank later advised owner Ari Bejar that the bills were fakes, printed on stiffer paper than real money.  Bejar has said that the funny money was convincing, complete with watermarks.

He  is holding the bad bills for the U.S. Secret Service, which investigates counterfeit crimes.

Many merchants including Cosmos won’t take large bills to lessen the risk of losing large sums to counterfeiters.  But with bogus $20 bills now in circulation, East County merchants would be advised to keep a close eye on the cash going into their registers.