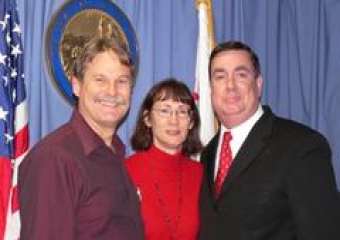 Photo: Major donors Gregg and Debby Hamann with Anderson at his 2008 holiday party

November 16, 2019 (San Diego’s East County) – The County has asked the District Attorney’s office to investigate allegations of criminal campaign finance violations by Joel Anderson's supervisorial campaign, in response to an inquiry made by the San Diego Union-Tribune, the newspaper reported.

“We feel there’s enough question here to forward it to the enforcement agency, i.e., the D.A.,” Michael Workman, spokesman for County Registrar of Voters Michael Vu, told the Union-Tribune, according to the article published on November 4.  “We are going to do that today.”

Anderson, a former state Senator and Assemblymember, is currently a candidate for County Supervisor to fill the seat held by Dianne Jacob, who must retire due to term limits after over 25 years in office.  Anderson previously announced a run for Supervisor in 2016, raising large sums through two campaign committees, some in excess of the County’s $850 per person limit. He later opted not to run in 2016 and started a new committee for the 2020 race, then transferred $272,900 from the 2016 coffers to the new entity.  He then began raising thousands of dollars in donations from some of the same contributors who had maxed out on donations to his 2016 campaign.

State campaign reports show Anderson claims he organized his 2020 supervisorial race starting in December 2014, raking in donations from East County business interests, but in fact he had publicly announced his run for 2016 before changing his mind. The key question is whether or not it is legal to move that money into his 2020 campaign account and raise more funds from the same people who gave the max previously.

Anderson’s campaign manager, Andrew Hayes, called the inquiry a “bogus attack” for political reasons. According to the Union-Tribune, he provided a letter from attorney James Lacy, who wrote, “Since this is a separate election, and as provided for by the county law, you may carry over the 2016 funds that you have from a separate election with no impact at all on the individual contribution limits for the separate 2020 election.”

Jacob has endorsed Poway Mayor Steve Vaus, who is running against Anderson in the 2020 Supervisor race.  Kenya Taylor, a Democrat with a background in behavioral health and community activism, is also running.

Jacob, in a written statement earlier this month, said “Mr.. Anderson has a history of either bending or breaking contribution rules. This doesn’t pass the smell test, and it should be determined if it passes the legal test.”

While Jacob may have a political motivation, the Union-Tribune spoke with two campaign finance experts who agreed that Anderson’s actions likely violated the law.

Rey Lopez-Calderon executive director of Common Cause in California, notes that the language of the local law states that nobody can accept, solicit or give above the limit or donate “in any way that would cause the limits to be exceeded with respect to a single election,” adding, “If this were legal, what he’s doing, then anyone could do this each year until they have a huge amount of money.”

Election attorney James Sutton in San Francisco says while candidates are allowed to carry over funds from one election to another for the same office, that isn’t what Anderson did.  By claiming he began his 2020 race in 2014, some donors maxed out on the 2020 race five years ago. Accepting donations from the same donors in 2020 appears to be “double-dipping, over-the limit contributions that violate the most basic campaign-finance law,” according to Sutton. (Of note, Sutton himself was fined nearly nearly a quarter of a million dollars in 2006 for an ethics violation in San Francisco, and had faced past questions of campaign finance issues.)

Anderson has previously been fined $20,000 by the state’s Fair Political Practices Commission and returned over $100,000 in donations to his 2010 Assembly campaign committee, after the FPPC  investigated and found serious violations. In that case, the FPPC found that several major donors who had already given Anderson’s campaign the maximum allowed by state law made hefty donations to a Republican Central Committee in Fresno, which funneled the money into Anderson’s campaign.

Those donors included Hamann Companies and members of the Hamann family, as well as Sempra Energy, parent corporation of SDG&E, and the Barona tribe. Hamann, an East County construction company that leased space to Anderson for his offices and also has interests in industrial solar projects, gave a whopping $30,000 to the Fresno GOP central committee that wound up in Anderson’s campaign coffers.

Anderson’s opponent at the time, Jeff Stone, a Riverside County Supervisor, called the action “money laundering.”   Anderson has bristled at that term.

In a May 2010 interview with ECM, Anderson insisted the excess contributions were “flat-out mistakes” made by staff during a campaign that took in over half a million dollars. “There was no money laundering,” he said, noting he had endorsements from police and sheriff deputy organizations. “Do you think they would endorse me if I were a money launderer?”

He has noted that the 2010 donations in question were never spent and said the money was returned to donors “as quickly as possible” after Anderson became aware of the violations.  He paid the $20,000 in state fines, but did not admit wrongdoing.

A key question is whether any of his big donors received any improper favors.

Anderson refused to take a stand against many major energy projects proposed or built in East County, despite being urged by many citizens to do so. Anderson had taken substantial donations from Sempra, owner of SDG&E, which stood to profit off the projects. On most, he remained neutral – including Sunrise Powerlink high voltage lines, Tule Wind in McCain Valley, and the Quail Brush gas-fired power plant proposed near Mission Trails. The latter drew opposition from Santee’s Republican Mayor, Randy Voepel, as well as San Diego’s Democratic Mayor Bob Filner.  When asked at the time by ECM, he indicated these were not state issues and thus as a state legislator he opted to remain neutral.

However, he took an active stance in favor of Soitec Solar’s proposed industrial solar project in McCain Valley – on land owned by Hamann companies. He went so far as to send a letter to County Supervisors lobbying them to vote in favor of the projects, where were narrowly approved by a single vote before Soitec later withdrew from the solar business and sold its interests. Hamann leased office space to Anderson for his local legislative headquarters, in addition to giving him donations far over the legal limits.

Anderson through the years has declined to answer questions about his ties to special interests. His office even banned a constituent who posed tough questions.

In 2015, when Anderson was actively campaigning for Supervisor, constituent Thomas Biggers, who said he previously voted for Anderson, became concerned about the then-State Senator’s special interest ties.

You have the right to speak freely in this country about any issue you wish. Unfortunately, your phone call from February 5, 2015 introduced the notion of bribery. The senator prohibits team members from any communications or meetings with anyone who believes they can bribe him.  Senator Anderson works to uphold the highest ethical standards for his office and cannot be bought.  Such a suggestion, even in passing, is an affront to the integrity of our open democratic institutions and will not be tolerated. If you contact our office in the future, we will not respond.

In an interview with East County Magazine on KNSJ, Biggers expressed shock at the response. He says he never called Anderson, only visited in person, and provided us the written copy of his questions.  He bristled at Cuesta’s insinuation and says he never attempted to bribe the Senator, merely voiced concerns about large sums of money the Senator has taken from a special interest whose project the Senator supported.

Biggers says the treatment he received by the Senator’s office made him feel as if “I lost my citizenship.”

ECM contacted Anderson’s office to request comments on Biggers’ statements for an article and radio interview with Biggers, but neither Anderson nor his staff replied.

While in Sacramento, Anderson was the California representative for the American Legislative Exchange Council, or ALEC, which named him ALEC’s legislator of the year in 2011.  ALEC is financed by major corporations – especially the oil industry, pharmaceutical and tobacco companies.

ALEC asks its legislative representatives to introduce model legislation benefitting its corporate backers, which also include the insurance industry interests over those of consumers in various measures, as well as privatizing public education, denying climate change, and promoting free market, pro-business doctrines.  The group became so controversial that public pressure led to several major corporations cancelling membership in ALEC including Mcrosoft, General Motors, Coke, Proctor & Gamble and Bank of America.

Anderson refused to respond to inquiries from  our media outlet and others at the time on his ties to ALEC and other corporate and special interests.  He also refused to fill out Project Vote Smart’s political courage test, which measures each candidate’s willingness to provide citizens with their positions on key issues.   His score?  Zero.

The Valley Roadrunner in Valley Center, in a February 5th article titled “Where in the world is state Senator Joel Anderson, R-38th District?”  noted that Anderson was absent on the opening day of the 2015 Legislative session in Sacramento.  The Roadrunner reports that Anderson was meeting with a lobbyist from the insurance company Geico, a major past campaign donor, over a lobster luncheon, as FollowTheMoney.org listed.

Eddie Kurtz, executive director of Courage Campaign, a nonpartisan organization, criticized the Senator for a lavish lunch with  a lobbyist while “his constituents back in California are struggling to make ends meet.”  He added, “Senator Anderson should explain what was talked about during that lunch and what promises were made.”

Anderson was reprimanded by the Legislature after an independent investigation found that during a political fundraiser near the capitol, he told a female lobbyist he wanted to slap her, Cal Matters reported. Anderson has claimed his meaning was misunderstood, but the lobbyist and four witnesses confirmed the incident, with some indicating Anderson used the term “bitch slap” after drinking.  Anderson has claimed he was misunderstood.

He subsequently ran for State Board  of Equalization in 2018 and was defeated by Mike Schaefer, a Democrat who was not endorsed by the Democratic Party due to scandals including fraud, which led to Schaefer’s disbarment from practicing law in two states.

Anderson has long positioned himself as a “tax fighter.”  He won awards from groups such as the San Diego Regional Chamber of Commerce, American Legion, and California Small Business Association, among others. He authored a bill to divest California pensions from companies violating federal law at the time by doing business with Iran and coauthored various bills to protect privacy and public safety, among other legislative efforts listed on his website.

Project Vote Smart listed a summary of his political ratings (which ranged from 0% ratings from the Sierra Club,California Clean Money Action and Calif. Federation of Teachers and others, to 100% by the California Chamber of Commerce, American Conservative Union and others), his voting record, as well as stances on  positions, excerpts of speeches and more.

On his campaign website, Anderson states his reasons for running for Supervisor are because “I believe our children and grandchildren deserve the same benefits we enjoyed growing up in San Diego County. That's why I will work to improve our roads, support attainable housing, and promote career opportunities. If our family members can find housing and work, maybe we won't have to travel to Phoenix to visit our grandchildren.”

ECM contacted Anderson’s campaign via email to request comments for this article, but did not receive a response.