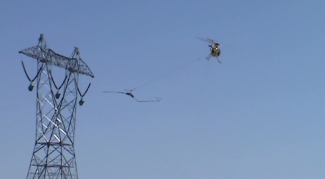 November 6, 2011 (San Diego’s East County) – On Friday, the County Department of Planning and Land Use announced a new amendment to noise variances granted to SDG&E for Sunrise Powerlink construction.

Due to residents' complaints, the County has banned Sunday flights over  the Carveacre area, according to LeAnn Carmichael at DPLU. The County is also considering requests from other communities seeking broader bans on Sunday flights in the Alpine and Lakeside areas.

A meeting of concerned residents in Lakeside’s El Monte Valley last week was “heart-breaking,” said Laura Cyphert, a Lakeside Planning Group member and co-founder of the East County Community Action Coalition. “There were many people from the community who testified as to the devastating impact the construction was having on their lives, including reports of children being nearly injured when their horse was spooked by a helicopter.

Visitors who live outside the valley also testified that “the helicopters were making it impossible to enjoy El Monte Park, which is a popular weekend location for birthday parties, group events, and family picnics,” Cyphert said, adding that the variance allowing SDG&E to fly seven days a week is also adversely impacting horse boarding facilities and visitors to El Capitan Reservoir.

Last week, the County amended a variance to grant relief in a portion of the valley from Sunday flights, but did not prohibit flights related to construction at the eastern end of the valley.

“So effectively, we still have the constant stream of helicopters flying over homes and parks en route to more distant construction sites,” Cyphert complained, adding that residents plan to ask the county to extend a no-fly zone to cover the entire El Monte Valley on Sundays.
SDG&E requested the variances allowing seven days a week of helicopter flights in hopes of hastening construction before December 1, when all flights must stop for the winter in these areas due to eagle nesting season.

Meanwhile, today ECM received an e-mail from Alpine Planning Group Lou Russo, whose home overlooks Bell’s Bluff in Alpine, where he and neighbors have complained of noisy Sunday flights for the past two weekends.

“Nine a.m. Sunday morning,” he observed as the buzz of helicopters filled the air, “and they’re still at it.”