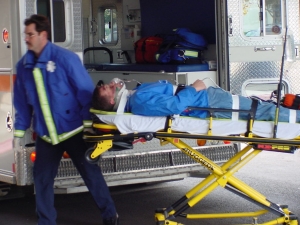 Ambulance responses in our region raise alarms:  Part IV in a series

April 6, 2015 (San Diego’s East County)—San Diego County’s contract with its new ambulance provider for East County, Mercy,  requires that response times be less than 30 minutes 90% of the time in rural areas and 10 minutes in urban areas.  That’s too long if you’ve had a heart attack or other major trauma.

When we inquired about response times, County staff advised us that in 2014, the County Fire Authority (ie Cal Fire) had a better response time than the requirement, averaging just over 10 minutes, while the former ambulance provider, AMR, average about 14 minutes. (Read more)