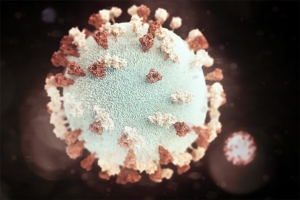 Image Credit: CDC
By José A. Álvarez, County of San Diego Communications Office
The County Health and Human Services Agency issued a health advisory to the local medical community to be on the lookout for mumps given the unusually high number of cases being reported in the region.
Sixty San Diego County residents have been reported with confirmed or probable mumps so far in 2019, the greatest number in over 25 years. In comparison, nine cases were reported in 2018 and 15 the year before that.

“We’re asking providers to report suspected mumps cases to the County, and we’d like the public to know about the symptoms of mumps, so they seek care,” said Wilma Wooten, M.D., M.P.H., County public health officer.

This year’s mumps cases range in age from 9 months to 79 years of age—average age is 28 years and 37 cases (62%) were men.
There have been no deaths; however, six people were hospitalized. Two people had hearing loss and five men had swelling of the testicles. 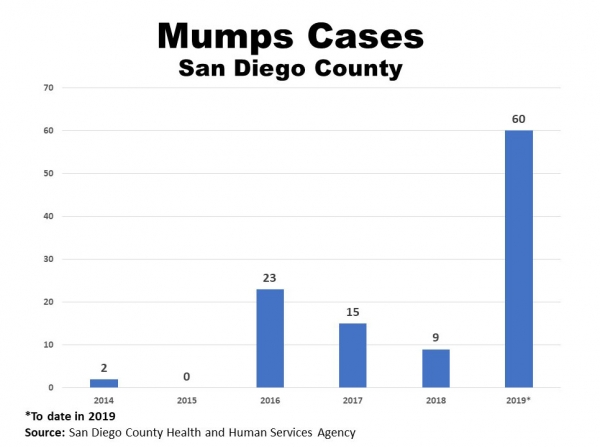 Neighboring counties have reported recent increases in mumps cases as well. Los Angeles County reported an outbreak this month in that county’s Men’s Central Jail. Orange County has noted an increase in mumps cases for 2019.
As of November 16, 2019, a total of 3,067 mumps cases have been reported nationwide this year to the Centers for Disease Control and Prevention. The Mexican Ministry of Health reported 7,200 cases of infectious parotitis/mumps in Mexico in 2019 through November 9. This includes 754 cases in Baja California, the largest number there since 2001.
Six people reported travel to Tijuana during their exposure periods, and eight people went to other locations outside the United States.
“Everyone should get the recommended age-appropriate immunization for measles, mumps and rubella, the MMR vaccine,” Wooten said.  “For some adults, that means getting a second shot before travel outside the United States.”

Mumps is a highly contagious viral disease. It is spread by coughing, sneezing or close contact with an infected person.
Mumps causes a fever, headache, earache, and inflammation of the salivary glands which results in swelling and tenderness at the angle of the jaw. Anyone who thinks that they have mumps should contact their provider before going for care so proper precautions can be taken to prevent exposure to others.
Severe complications are rare, but can include meningitis, decreased fertility, permanent hearing loss, and, in extreme cases, fetal loss during first trimester of pregnancy. There is no treatment for mumps. Most people recover without problems.
The best way to prevent mumps is by getting the MMR (measles, mumps and rubella) vaccine. Two doses of the vaccine are recommended—one at 12 to 15 months of age and another at 4 to 6 years of age.  Before 1990, only one MMR was recommended, so some adults may have had only one MMR shot as a child.  Two doses of MMR are recommended before travel outside the country.
For more information about mumps, other vaccine-preventable diseases, and the vaccines that protect against them, visit the CDC mumps website or contact the County HHSA Immunization Program at (866) 358-2966 or visit the website at www.sdiz.org.
José A. Álvarez is a communications specialist with the County of San Diego Communications Office.