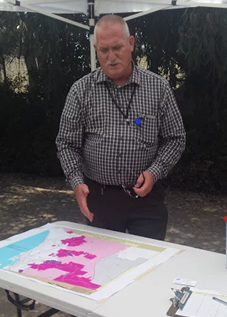 The updated plan goes before the Board of Supervisors on Oct. 10. If approved, when the contracts of the three ambulance companies expire in the next few years, they will have to comply with the new plan which will shorten response time.

The actions follow a five-part special series by East County Magazine published  in 2015, investigating slow ambulance response times in some unincorporated areas and changes in county ambulance providers. (See links to our five-part series at the bottom of this article.)

On the map of the County, the areas with dense population growth designated as urban will now have a 12 minute response time. Rural areas, such as Alpine and Jamul, have fire department response in 13 minutes and will now have ambulances in 20. “Outlying” areas like Dulzura and Campo will shorten their response time to 25 minutes. Currently, deserts have "best effort " time and no numerical suggestion exists. The plan would say 60 minutes response times for the desert.

The County’s proposed changes to shorten response times are a big step in the right direction.  While it may be impossible to reach every remote location as quickly as desired, every second counts in a life-threatening emergency.  The American Heart Association reports that brain death and permanent death start to occur in 4–6 minutes after someone experiences cardiac arrest.  In addition, long response times in the past have meant that it took more than the "golden hour" (the time frame that medical experts recommend for saving lives.) to reach a hospital following a trauma, stroke or other medical emergency in rural areas.

A common problem in rural and outlying areas, as expressed by Teresa Greenhalgh, Program Manager of SDCFA Community Emergency Response Team (CERT), is that fire engines now arrive quickly but people must wait 30 minutes plus for an ambulance to arrive. "We've seen positive changes; we'd like to see that next step," she said.

Parr assured her that there are “Fire engines waiting for ambulance across San Diego County. We wish there were more ambulances, but we can't afford to put an ambulance in every fire station."

He brought up that 25 years ago not all fire engines had EMTs on them. Now this is standard, which has vastly improved the care for residents.

Greenhalgh countered that fire engines cannot answer other calls until the ambulance arrives, which could leave other residents underserved.

In the East County areas being improved in this plan, three separate contractors work in each zone. Another goal of the plan is to force better cohesion between the companies so it functions as one area.

The profitability of the ambulance companies could become a concern as they must conform to this new plan. Since the times are based on a feasibility study in which the actual time it takes ambulances to answer calls currently was studied, Parr is not concerned with their ability to improve response time.

The hope of the plan is for a dynamic system to replace a static one so that all residents are better served. Parr views the plan as generally positive and believes it will pass through County approvals without controversy.

At the final meeting for community input which Parr hosted in Crest on Aug. 25, only six residents attended the event hosted in a library parking lot under a canopy. Greenhalgh pointed out that all of the meetings he hosted were during the day when many people work. She said she was missing out on pay to attend the meeting because she viewed it as important. Parr admitted that the events were inconveniently timed and ill-publicized, but said he could have done a better job if his office had given him more time.

The sparse attendees were all directly connected to the issues as CERT volunteers, a fire fighter, AMR employee and fire board member. No one simply interested in emergency services in their community made it to the meeting on the warm afternoon.

Although no more meetings are scheduled, Parr said he could attend meetings if requested and residents could also call his office.

Background:  See our five-part special series raising concerns over changes in ambulance providers by the county and slow response times in rural areas:

We had representatives from Potrero, Campo, Lake Morena, Boulevard, Jacumba Hot Springs. Waiting to see what they propose to the Board of Supervisors.

What did people say about the plan?  Can you share some details on what community members saw as the positives and/or negatives about this proposal?

Did anybody take minutes at these meetings, get photos or video?