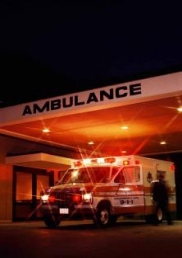 Ambulance responses in our region raise alarms:  Part V in a series

But some question that 30-minute standard, and why such an important contract involving about 850 square miles was enacted without first consulting the fire agencies that are the first responders to 911 emergency calls.

At a September meeting of the San Miguel Fire Protection District, Director Theresa McKenna noted that the minimum response times for most urban areas of the county is 12 minutes, but for Zone 2, which encompasses most of East County to the Imperial County line and includes much of Otay Mesa, it’s 30 minutes. View Zone 2 map of ambulance service here.

“I’m just appalled,” McKenna said. “That’s just not acceptable to me, and I feel that’s absolutely a decrease in service.”

At that meeting, SMFPD board members talked about changing the county’s three-year contract with Mercy to reduce the response times for certain areas that are closer to urban centers. While a 30 to 40 minute window might be acceptable for such outlying areas as Jacumba or Mt. Laguna, it shouldn’t be that long for suburban areas like Alpine or Crest, directors said.

In fact, it was an increase in response times in the Crest area this summer that prompted Mercy to move an ambulance unit to the Harbison Canyon area. Yet making such adjustments doesn’t change the fact that Mercy’s outside threshold remains 30 minutes, even though its average response times are well below that.

Rick Roesch, president of Mercy Medical, said his company’s record since it has taken over the Zone 2 contract in April has been excellent. “If we don’t meet the response times set for 90 percent of our calls, we’re only one or two minutes late,” Roesch said.

To ensure a higher level of service, Mercy provided two additional units to Zone 2, in addition to the four units required by the contract. That’s because the business tries to “always do what’s best for the patient,” Roesch said.

Roesch said the 30-minute threshold conforms to state guidelines but that every jurisdiction has the ability to set its own minimum response times.

Fire Chief Bill Paskle of the Alpine Fire Protection District said Mercy has done a good job of providing service to his district since it took over the contract, and has met the prescribed times above 90 percent.

Although 30 minutes seems like a long time for emergency response, “if someone is calling from a rural area, and there’s an ambulance unit that’s out on another call, it will take a little time for an ambulance to get out there,” Paskle said.

Mercy has been particularly effective in lining up mutual aid agreements with some of the local Indian tribes to ensure if  its units are on a call that another ambulance unit from one of the tribal fire districts can respond, Paskle said.

However, those agreements with the tribes have been on a ‘handshake’ basis, not written. When Mercy took over the contract it only had written aid agreements with one other ambulance servicer, Schaefer Ambulance, which provides service in Imperial County.

Today, Mercy has written aid agreements with four ambulance providers, but still has only verbal agreements with the Sycuan and Viejas tribal fire districts, as well as the Lakeside Fire District.

Roesch said not having written aid agreements in place is not a problem at all. “We have all the resources we need in East County,” he said.

However, no matter how many units are in an area, sometimes mistakes happen. According to an ECM reader, in September, a Mercy unit picking up her 90-year old mother in Dehesa took a far more circuitous route to get to Grossmont Hospital. She said the trip that she followed the ambulance took at least 40 minutes longer than it should have.

The driver apparently ignored both the GPS terminal and company-provided cell phone with GPS capability that are standard equipment in every Mercy ambulance, Roesch said. That driver is no longer employed with Mercy, he advised ECM.

Another incident that occurred this summer involved a dispute between two emergency dispatch units over confusion about  the boundaries of Zone 1 and Zone 2 on a 911 call, according to statements at an October meeting of the San Miguel Fire District.

The dispute entailed e-mail correspondence between dispatchers from the Heartland and the Monte Vista fire districts over the call and which ambulance provider should have been dispatched. That prompted concerns that AMR, the former ambulance contractor for Zone 2, did not have a written mutual aid agreement with Mercy, which may have affected its response. A written agreement between the two contractors has since been signed.

San Miguel Fire Chief Ray Chaney downplayed the dispute, but expressed frustration with complying with a contract that his agency had no say in.

“None of us likes the way this whole thing went down but I didn’t write the health and safety code on how ambulance service is provided in the state of California,” Chaney said at the October board meeting.

In a later interview, Chaney declined to provide details of the incident. He said the county and all the fire districts are working cooperatively to improve the dispatch systems, and reduce response times.

At the same meeting, SMFD directors agreed by consensus to have Chaney write a letter to the county’s EMS asking to change the way future ambulance contracts are vetted, and to consult with the public fire districts that implement the contracts before these are awarded. That letter has not been sent as yet, Chaney said.

Some on the SMFD board were more critical of EMS than others.

“The bottom line, in my opinion, is that the county screwed up big time,” said Director Mike Vacio, who has been a firefighter for 27 years and the captain of the Alpine Fire Protection District. ‘Now we’re trying to fix the problem.”

Cal Fire Chief Tony Mecham told the board that since the EMS, efforts have been made to fine tune the agreement. However, the County also made it clear that the contract won’t be rebid, he said.

Requests to San Diego County to talk with an EMS official were not fulfilled.

Dave Nissen, deputy chief of Cal Fire, the agency that oversees fire and emergency response in the county, said the 30 minute response time was part of the previous contract with AMR, which held the contract for about 20 years.

If communities want to reduce the response times to 12 minutes that would likely require putting ambulances in every community, Nissen said. “These things tend to be driven by dollars....It costs money to provide this service.”